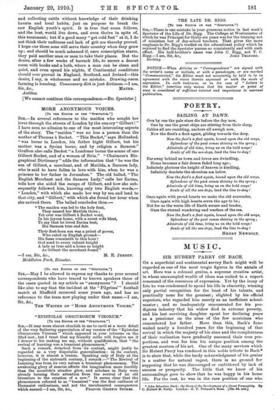 " EPISTOLAE OBSCURORUM VIROR1JM." [To TER EDITOR OF THE "

SIR,—It may seem almost churlish in me to cavil at a mere detail of the very flattering appreciation of my version of the "Epistolae Obscurorum VirorLun ' which appeared in your columns on the 22nd inst., but I trust that my friendly critic will forgive me if I demur to his making me say, without qualification, that "the revival of learning was a transient phenomenon."

Such a remark, detached from its context, might justly be regarded as a very disputable generalisation : in its context, however, it is almost a truism. Speaking only of Italy at the beginning of the sixteenth century, I remark:—" The Revival of Learning was from its very nature a transient phenomenon. The awakening glory of -sunrise affects the imagination more forcibly than the noontide's steadier glow, and scholars in Italy were already turning their attention irom the revival of an old literature to the creation of a new." It seems clear that the phenomenon referred to as " transient " was the first outburst of Humanist enthusiasm, and not the unexhausted consequences