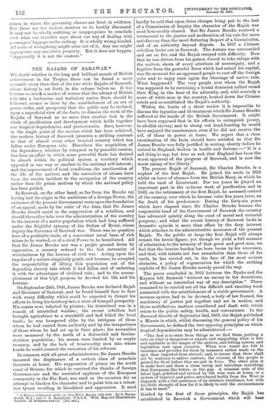 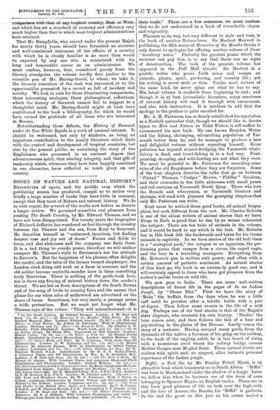 THE RAJAHS OF SARAWAK.*

We doubt whether in the long and brilliant annals of British achievement in the Tropics there can be found a more romantic story than that of the two white Rajahs of Sarawak, whose history is set forth in the volume before us. It has become so much a matter of course that the advent of British rule into a barbarous and turbulent native State should be followed sooner or later by the establishment of an era of peace, order, and prosperity that the public may be inclined, upon a superficial view of the facts, to dismiss the work of the Rajahs of Sarawak as no more than another link in the chain of pacification and development which holds together our tropical dependencies and protectorates. Save, however, in the single point of the success which has been achieved, the modern history of Sarawak presents a striking contrast to that of almost every other tropical country which has fallen under European rule. Elsewhere the acquisition of the dependency, whether by conquest or by peaceful cession, has been an affair in which some powerful State has desired to absorb within its political system a territory which appealed in one way or another to the national self-interest ; and the improvement of local conditions, the amelioration of the life of the natives, and the correction of abuses have been the results incident to the occupation of the country rather than the prime motives by which the national policy has been guided.

In Sarawak, on the other hand, so far from the Brooke raj having had its origin in the ambitions of a foreign Power, the existence of the present Government rests upon the foundation of an appeal, made by the ruler of the time, that Sir James Brooke should assist in the suppression of a rebellion, and should thereafter take over the administration of the country in the interest of a native population which had long suffered under the frightful tyranny of the Sultan of B.runi, whose deputy the Governor of Sarawak was. There was no question here of a profitable trade, of a convenient naval base, of rich mines to be worked, or of a rival Power to be humiliated. All that Sir James Brooke saw was a people ground down by oppression, a country reduced to the last extremity of wretchedness by the horrors of civil war. Acting upon the impulse of a nature singularly gentle and humane, he accepted the responsibility of lifting this population out of the degrading slavery into which it had fallen and of endowing it with the advantages of civilised rule ; and to the accom- plishment of this high purpose he devoted his life and his fortune.

On September 24th, 1841, James Brooke was declared Rajah and Governor of Sarawak, and be found himself face to face with every difficulty which could be expected to thwart his efforts to bring his territory into a state of tranquil prosperity. His coasts were infested by pirates ; his hinterland was in a tumult of intertribal warfare ; the recent rebellion had brought agriculture to a standstill and had killed the local trade ; he was hampered alike by the intrigues of those whom he had ousted from authority and by the inexperience of those whom he had set up in their place; his necessities were measured by the needs of a distracted and famine- stricken population ; his means were limited by an empty treasury, and by the lack of trustworthy men into whose hands he could commit the execution of his reforms.

In common with all great administrators, Sir James Brooke incurred the displeasure of a certain class of armchair theorists at home. His suppression of piracy on the north coast of Borneo, for which he received the thanks of foreign Governments and the unstinted applause of the European community in the Far East, was used as the occasion for an attempt to blacken his character and to paint him as a relent- less tyrant revelling in bloodshed and oppression. It need • A History of Sarawak under its Two White Bajalu, 1839-1908. By B. Baring- Gould, M.A., and C. A. Eampfylde, F.H.G.S. With Map and Illustrations. London: H. Sotheran and Co. [15s. net.] hardly be said that upon these charges being put to the test of a Commission of Inquiry the character of the Rajah was most honourably cleared. But Sir James Brooke received a

testimonial to the justice and moderation of his rule far more satisfactory than the most flattering Report of a Commission, and of an authority beyond dispute. In 1857 a Chinese rebellion broke out in Sarawak. The Astana was surrounded and set on fire, and the Rajah escaped with difficulty. Now that he was driven from his palace, forced to take refuge with the natives, shorn of every attribute of sovereignty, and a fugitive from the powerful force which had seized his capita], was the moment for an oppressed people to cast off the foreign yoke and to enjoy once again the blessings of native rule. What happened ? The very people over whom the Rajah was supposed to be exercising a brutal dominion rallied round their King in the hour of his adversity, and, with scarcely a score of white men in the country, hunted down the Chinese rebels and re-established the Rajah's authority.

Within the limits of a short review it is impossible to discuss the injustice and ill-treatment which Sir James Brooke suffered at the hands of the British Government. It might have been supposed that in his efforts to extinguish piracy, to abolish slavery, and to stamp out head-hunting he would have enjoyed the countenance, even if he did not receive the aid, of those in power at home. We regret that a close examination of the facts should have satisfied us that Sir James Brooke was fully justified in writing, shortly before he retired to England, broken in health and fortune :—" It is a sad thing to say, but true as sad, that England has been the worst opponent of the progress of Sarawak, and is now the worst enemy of her liberty."

The present Rajah of Sarawak, Sir Charles Brooke, is a nephew of the first Rajah. He joined his uncle in 1852 whilst on leave of absence from the British Navy, in which he held the rank of Lieutenant. For ten years he played an important part in the arduous work of pacification, and in 1863, on the retirement of the first Rajah, he assumed control of the country, over which he became ruler five years later, on the death of his predecessor. During the forty-six years which have elapsed since Sir Charles Brooke became the responsible head of the Government of Sarawak the country has advanced quietly along the road of moral and material progress ; and what the recent history of Sarawak lacks in dramatic episode is more than offset by the deep interest

which attaches to the administrative measures of the present Rajah. To the public at large the first Rajah will always remain the heroic figure ; yet though we yield a full measure

of admiration to the memory of that great and good man, we feel that the heavier burden has been borne by his successor, and that, with talents not less remarkable than those of his uncle, he has carried out, in the face of the most serious obstacles, a policy of regeneration for which the striking exploits of Sir James Brooke merely paved the way.

The peace concluded in 1863 between the Dyaks and the Kayans left Sarawak "without an enemy in her dominions,

and without an intertribal war of any description." There remained to be carried out all the difficult and exacting work connected with the establishment of a stable government. A revenue system had to be devised, a body of law framed, the machinery of justice put together and set in motion, and

those multifarious matters considered and dealt with which relate to the public safety, health, and convenience. In the Sarawak Gazette of September 2nd, 1862, the Rajah published a Minute in which, whilst discussing the general policy of his Government, be defined the two opposing principles on which tropical dependencies may be administered :—

"The first is to start from things as we find them, putting a veto on what is dangerous or unjust, and supporting what is fair and equitable in the usages of the natives, and letting system and legislation wait upon occasion. When new wants are felt it examines and provides for them by measures rather made on the spot than imported from abroad; and, to insure that these shall not be contrary to native customs, the consent of the people is gained for them before they are put in force. The other plan is to make here and there a clean sweep and introduce something that Europeans like better, in the gap. A criminal code of the latest type, polished and revised by the wise men at home, or a system of taxation and police introduced bodily from the West is imposed, with a full assurance of its intrinsic excellence, but with too little thought of how far it is likely to suit the circumstances it has to meet."

Guided by the first of these principles, the Rajah has established in Sarawak a Government which will bear comparison.with, that...of, any trxrpienb- country; .Bask..or .Wesb, 4 and which has set a standard of economy and efficiency very much higher than that to which most tropical administrations have attained.

That Mr. Bampfylde, who served under the present Rajah for nearly thirty years, should have furnished an accurate and well-considered statement of the affairs of a country with which be is closely familiar is no more than would be expected by any one who is acquainted with his long and honourable career as an administrator. We must confess, however, that, considered purely from the literary standpoint, the volume hardly does justice to the versatile pen of Mr. Baring-Gould, to whom, we take it, the literary execution of the task was entrusted, or to the opportunities presented by a record so full of incident and novelty. We look in vain for those illuminating comparisons, those interesting analogies, those philosophical reflections, which the history of Sarawak cannot fail to suggest to a thoughtful mind. Mr. Baring-Gould might at least have contributed to the book a bibliography, for which he would have earned the gratitude of all those who are interested in Borneo.

Netwithstanding these defects, the History of Sarawak under its Two White .Rajahs is a work of unusual interest. It should be welcomed, not only by students, as being an important contribution to the scanty literature which deals with the control and development of tropical countries, but also by the general public, as containing the story of two Englishmen who possessed in an eminent degree that adventuresome spirit, that sterling integrity, and that gift of leadership which, whenever they have been happily combined in one character, have reflected so much glory on our country.