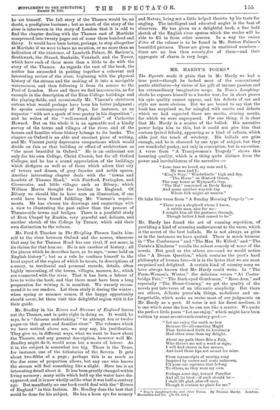 MR. HARDY'S POEMS.* The Dynasts made it plain that in

Mr. Hardy we had a true poet—though he lacked most of the conventional poetic attributes—by virtue of his gift of intense passion and his extraordinary imaginative scope. In Time's Laughing- stocks he exposes himself to a harder test, for in short pieces his epic quality cannot appear, and his defects of ear and style are more obvious. But we are bound to say that the book has surprised us, for mingled with merits and defects which we had expected there are merits, shining merits, for which we were unprepared. For one thing, it is clear that Mr. Hardy is a master of the ballad. His narrative power helps him to this, but it could not give him that curious lyrical felicity, appearing as a kind of refrain, which adds just the touch of witchery. His ballads are grim enough, and he is obsessed by one type of subject, but they are wonderful poetry, not only in conception, but in execution. A verse from "A Tra,mpwoman's Tragedy" shows this haunting quality, which is a thing quite distinct from the power and inevitableness of the narrative :—

My man and I; 'King's Stay,' Windwhistle ' high and dry, 'The Horse' on Hintock Green, The cosy house at Wynyard's Gap, The Hut' renowned on Brady Knap, And many another wayside tap

Or take this verse from "A Sunday Morning Tragedy

" There was a shepherd whom I knew, A subtle man, alas for me : I sought him all the pastures through, Though better I had ceased to be."

Mr. Hardy has found the art of cunning repetition, of providing a kind of crooning undercurrent to the verse, which is the secret of the best ballads. He is not always as grim as in the instances we have quoted. There is much humour in "The Conformers" and "The Man He Killed," and " The Curate's Kindness" recalls the robust comedy of some of the novels. But good as the others are—and we would notice also "A Dream Question," which contains the poet's hard philosophy of human fate—it is in the lyrics that we are most surprised and delighted. A certain kind of country song we have always known that Mr. Hardy could write. In "The Farm-Woman's Winter," the delicious verses "At Caster- bridge Fair," "The Dark-eyed Gentleman," "Rose-Ann." and especially "The Home-Coming," we get the quality of the novels put into verse of an idiomatic simplicity. But there are others, delicate porcenin things, melodious and un- forgettable, which make us revise most of our judgments on Mr. Hardy as a poet. If verse is not his finest medium, it is one which none the less he can uie like a. master. We quote the perfect little poem "Let me enjoy," which might have been written by some seventeenth-century poet :—

"Let me enjoy the earth no less Because the all-enacting Might That fashioned forth its lovelincm Had other aims than my delight.

About my path there flits a Fair, Who throws me not a word or sign; I will find charm in her uncare, And laud those lips not meant for mine.

From manuscripts of moving song Inspired by scenes and souls unknown, I'll pour out raptures that belong To others, as they were my own.

Perhaps some day, toward Paradise And all its blest—if such should be— I shall lift glad, afar-off eyes, Though it contain no place for me."