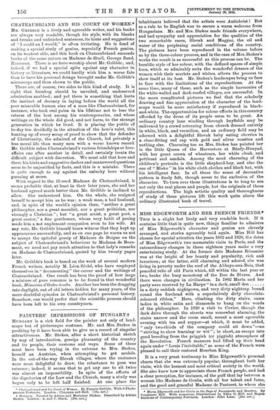 Page 44, 29 January 1910 — PAINTERS' IMPRESSIONS OF HUNGARY.t HUNGARY is a rich field for
Close

PAINTERS' IMPRESSIONS OF HUNGARY.t HUNGARY is a rich field for

the painter not only of land- scape but of picturesque costume. Mr. and Mrs. Stokes in profiting by it have been able to give us a record of singular attractiveness. Mr. Stokes, after a short historical sketch by way of introduction, gossips pleasantly of the country and its people, their customs and ways. Some of these must have been trying in the extreme to Mrs. Stokes, herself an Austrian, when attempting to get models. In the out-of-the-way Slovak villages, where the costumes were most delightful to draw, the reluctance to pose was extreme ; indeed, it seems that to get any one to sit twice was almost an impossibility. In spite of the efforts of the dignitaries of the Law and the Church, many a study was begun only to be left half finished. At one place the Chateaubriand and his Court of Women. By Francis Gribble. With 6 Photo- gravure Portraits. London : Chapman and Hall. [15s. net.] t Hungary- Tainted by Adrian and Marianne Stokes. Described by Adrian Stokes. London : A. and C. Black. [20s. net.] inhabitants believed that the artists were Antichrist ! But as a rule to be English was to secure a warm welcome from Hungarians. Mr. and Mrs. Stokes made Mends everywhere, and had sympathy and appreciation for the qualities of the two remarkable races, Slovak and Magyar, the oil and water of the perplexing racial conditions of the country. The pictures have been reproduced in the volume before us by the three-colour.process, and in the case of Mrs. Stokes's works the result is as successful as this process can be. The heraldic style of her colour, with the defined spaces of simple hues, which so admirably suits the wonderful dresses of the women with their scarlets and whites, allows the process to show itself at its best. Mr. Stokes's landscapes bring us face to face with the limitations of the reproductions. At the same time, many of these, such as the simple harmonies of the white-walled and dark-roofed villages, are successful. In the more complicated pictures we feel that the scholarly drawing and fine appreciation of the character of the land- scape would be more satisfactory if reproduced in black- and-white. The opportunities for colour effects in this country afforded by the dress of its people seem to be great. An ordinary country lane winding through hayfields may be enlivened by a crowd returning from church dressed entirely in white, black, and vermilion, and an ordinary field may be adorned with a delightful Slovak baby eating cherries hi a close-fitting red cap with gold and silver rosettes and nothing else. Charming too as Mrs. Stokes has painted her is the little Queen of the Harvesters at Benfy-Hunyad, with her great crown of wheatears, her white cloak, and petticoat and sandals. Among the most charming of the children's portraits is the little shepherd-boy, and also the one of " Misko " in his white cloth clothes and black hat, with his intelligent face. In all these the sense of decorative pattern is finely felt, though never to the exclusion of the character. To turn over these illustrations is to long to see not only the real places and people, but the originals of these reproductions. The high artistic quality and thoroughness of study of these pictures lift this work quite above the ordinary illustrated book of travel.