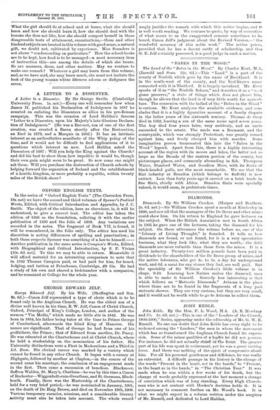 George Edward Jell. By his Wife. (Skeffington and Son. 88. 6d.)—Canon Jell represented a type of cleric which is to be found only in the Anglican Church. He was the eldest son of a divine well known in his time, R. W. Jell, Canon of Christ Church, Oxford, Principal of King's College, London, and author of the sermon "Via Media," which made no little stir in 1842. He was born in 1834, his father being tutor at the time to Prince George of Cumberland, afterwards the blind King of Hanover. His names are significant. That of George he had from one of his godfathers, the Prince; that of Edward from another, Dr. Pusey. He was educated at the Charterhouse and at Christ Church, where he held a studentship on the nomination of his father. His University distinctions we're a First in Moderations and a Third in Lit. Hum. His clerical career was marked by a variety which cannot be found in any other Church. It began with a curacy at Highgate, followed by another at Clapton,—in the course of the second came his marriage, the conclusion of an engagement made in the first. Then came a succession of benefices. Blackmoor, Saffron Walden, St. Mary's, Chatham—he was by this time a Canon of Rochester--Wiggonholt-cum-Greatham, and St. Germans, Black- heath. Finally, there was the Mastership of the Charterhouse, held for a very brief period,—he was nominated in January, 1901, on the death of Dr. Haig Brown, and died on November 19th, 1908. Various temporary curacies, missions, and a considerable literary activity must also be taken into account. The whole record

amply justifies the remark with which this notice begins, and it is well worth reading. We venture to quote, by way of correction of what seems to us the exaggerated censure sometimes to be heard, Canon Jelf's judgment about the Revised Version,—" the wonderful accuracy of this noble work." The active priest, provided that he has a decent outfit of scholarship, and this G. E. Jell certainly possessed, is a good judge in such a matter.