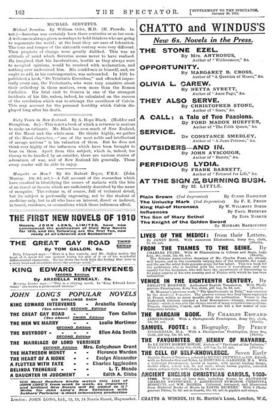 Michael Servelus. By William Osier, M.D. (H. Frowde. is. net.)—Servetus was certainly born three centuries or so too soon. A welcome is always given nowadays to bold thinkers who are going to regenerate the world; at the least they are sure of toleration. The tone and temper of the sixteenth century were very different. Then prophets of change were greatly disliked. This was an attitude of mind which Servetus seems never to have realised. He imagined that his lucubrations, hostile as they always were to accepted opinions, would be received with acclamation, and nothing over undeceived him. His confidence in himself, and, we ought to add, in his contemporaries, was unbounded. In 1531 he published a book, "De Trinitatis Erroribus," and offended impar- tially every one, the Protestants, who were very sensitive about their orthodoxy in these matters, even more than the Roman Catholics. His fatal visit to Geneva is one of the strangest incidents of his life, unless, indeed, he calculated on the success of the revolution which was to attempt the overthrow of Calvin. This may account for the personal hostility which Calvin dis- played long after his death.