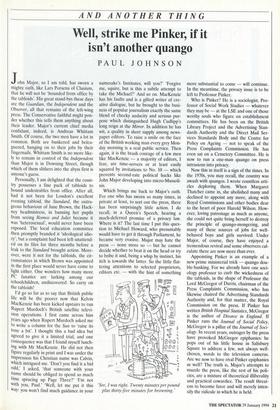 Well, strike me Pinker, if it isn't another quango

John Major, so I am told, has sworn a mighty oath, like Lars Porsena of Clusium, that he will not be 'hounded from office by the tabloids'. His great stand-bys these days are the Guardian, the Independent and the Observer, all that remains of the left-wing press. The Conservative faithful might pon- der whether this tells them anything about their leader. Major's current chief media confidant, indeed, is Andreas Whittam Smith. Of course, the two men have a lot in common. Both are bunkered and belea- guered, hanging on to their jobs by their fingernails. Whittam Smith is no more like- ly to remain in control of the Independent than Major is in Downing Street, though which of them slithers into the abyss first is anyone's guess.

Personally, I am delighted that the coun- try possesses a fine pack of tabloids to hound undesirables from office. After all, had it not been for London's excellent evening tabloid, the Standard, the outra- geous behaviour of Jane Brown, the Hack- ney headmistress, in banning her pupils from seeing Romeo and Juliet because it was 'heterosexual', would never have been exposed. The local education committee then promptly branded it 'ideological idio- cy'; but a complaint had been left unattend- ed on its files for three months before a leak to the Standard brought action. More- over, were it not for the tabloids, the cir- cumstances in which Brown was appointed in the first place would never have come to light either. One wonders how many more PC fanatics are lurking among our schoolchildren, undiscovered. So carry on the tabloids!

I'd go so far as to say that British public life will be the poorer now that Kelvin MacKenzie has been kicked upstairs to run Rupert Murdoch's British satellite televi- sion operations. I first came across him years ago when Rupert Murdoch asked me to write a column for the Sun to 'raise its tone a ,bit'. I thought this a bad idea but agreed to give it a limited trial, and one consequence was that I found myself lunch- ing with Mr MacKenzie. He did not then figure regularly in print and I was under the impression his Christian name was Calvin, which intrigued me. `Don't you find it a bid odd,' I asked, `that someone with your name should be obliged to spend so much time sprucing up Page Three?' I'm not with you, Paul."Well, let me put it this way: you won't find much guidance in your

namesake's Institutes, will you?' Forgive me, squire, but is this a subtle attempt to take the Michael?' And so on. MacKenzie has his faults and is a gifted writer of cre- ative dialogue, but he brought to the busi- ness of popular journalism exactly the same blend of cheeky audacity and serious pur- pose which distinguished Hugh Cudlipp's long reign at the Mirror. In addition he has wit, a quality in short supply among news- paper editors. To raise a smile on the face of the British working man every grey Mon- day morning is a real public service. Then again, it is the brash courage of a few men like MacKenzie — a majority of editors, I fear, are time-servers or at least easily squared by invitations to No. 10 — which prevents second-rate political hacks like John Major developing into micro-Mussoli- nis.

Which brings me back to Major's oath. For one who has sworn so many times, in private at least, to sort out the press, there has been surprisingly little action. I do recall, in a Queen's Speech, hearing a much-deferred promise of a privacy law. Where is it? The last time I put this ques- tion to Michael Howard, who presumably would have to get it through Parliament, he became very evasive. Major may hate the press — none more so — but he cannot decide whether to beat it on the head or try to bribe it and, being a whip by instinct, his itch is towards the latter. So the little flat- tering attentions to selected proprietors, editors etc. — with the hint of something

'See, I was right. Twenty minutes per pound plus thirty-five minutes for browning.' more substantial to come — will continue. In the meantime, the privacy issue is to be left to Professor Pinker.

Who is Pinker? He is a sociologist, Pro- fessor of Social Work Studies — whatever they may be — at the LSE and one of those worthy souls who figure on establishment committees. He has been on the British Library Project and the Advertising Stan- dards Authority and the Direct Mail Ser- vices Standards Body and the Centre for Policy on Ageing — not to speak of the Press Complaints Commission. He has even sat on a Cemetery Committee. He is now to run a one-man quango on press intrusions into privacy.

Now this in itself is a sign of the times. In the 1970s, you may recall, the country was awash with quangos. I wrote countless arti- cles deploring them. When Margaret Thatcher came in, she abolished many and declined to appoint any more, along with Royal Commissions and other bodies dear to the heart of poor Harold Wilson. How- ever, loving patronage as much as anyone, she could not quite bring herself to destroy the principle of quango-mongering, and

many of these sources of jobs for well- behaved boys and girls survived. Under Major, of course, they have enjoyed a tremendous revival and some observers cal- culate there are now more than ever.

Appointing Pinker is an example of a new prime ministerial trick — quango dou- ble-banking. For we already have one soci- ology professor to curb the wickedness of the tabloids, in the shape of Professor the Lord McGregor of Durris, chairman of the Press Complaints Commission, who has likewise chaired the Advertising Standards Authority and, for that matter, the Royal

pops out of his little house in Salisbury Square to address a few, not always well- chosen, words to the television cameras.

Are we now to have rival Pinker epiphanies as well? The truth is, Major's attempts to muzzle the press, like the rest of his poli- cies, are a mixture of theoretical illiberality and practical cowardice. The result threat- ens to become farce and will merely inten- sify the ridicule in which he is held.