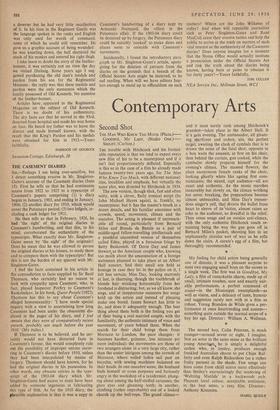 THE MAN WHO KNEW Too MUCH. (Plaza.)---- GOODBYE, MY LADY. (Studio One.)— SMILEY. (Carlton.) THE trouble with Hitchcock and his formid- able reputation is that we tend to expect every new film of his to be a masterpiece and if it isn't feel proportionately deflated. Especially is this so in the case of a film he already made famous twenty-two years ago, for The Man Who Knew Too Much, with different national- ities, localities and emphasis, but virtually the same plot, was directed by Hitchcock in 1934.

The new version, though slick, fast and often witty, with a clever, flatly ironical script .(by John Michael Hayes again), is, frankly, no masterpiece; but it has the master's touch in a dozen details, and his familiar assurance with crowds, speed, movement, climax and the macabre. The acting is pleasant if unremark- able all round, particularly from Bernard Miles and Brenda de Banzie as a pair of middle-aged fellow-travelling intellectuals and a youthful uncombed version of themselves called Edna, played in a ferocious fringe by Betty Baskcomb. Of Doris Day and James Stewart as the American couple who, knowing too much about the assassination of a foreign statesman planned to take place at an Albert Hall concert, find their small son held as hostage in case they let in the police on it, I felt less certain. Miss Day, looking matronly at last, is charming, though the toothbrush of blonde hair stricking horizontally from her forehead is distracting; but, as we all know, she sings, and at inopportune moments her songs hold up the action and instead of pleasing make one bored. James Stewart has little to do, and does it adequately enough. The best thing about them both is the feeling you get of their being a real married couple, with the familiarity, the authentic intimaoy of voice and movement, of years behind them. When the search for their child brings ,them from Morocco to London, the pace changes: it becomes harsher, grimmer, less intimate yet more individual; the movements are those of two strangers alone in a very large city, rather than the cosier intrigues among the crowds of Morocco, where veiled ladies sail past on bicycles, with sewing machines balanced on their heads. In one macabre scene, the husband finds himself at cross purposes and furiously angry in the workshop of a taxidermist, plung- ing about among the half-stuffed carcasses, the glass eyes and gleaming teeth; in another, climbing (rather improbably) out of a locked church up the bell-rope. The grand climax—

and it must surely rank among Hitchcock's grandest—takes place in the Albert Hall. It is a gala evening. The ambassador, all gleam- ing shirtfront and orders, sits, the perfect target, awaiting the clash of cymbals that is to drown the noise of the fatal shot; opposite in a box waits the assassin, at first on his chair, then behind the curtain, gun cocked, while the cymbalist slowly preparep himself for the evening's climax. The massed flowers; the plain anonymous female ranks of the choir, looking ghastly white like ageing first com- municants; the mixed, rapt audience—all are exact and authentic. As the music marches inexorably but slowly on, the climax writhing but never breaking, the preparations become almost unbearable, and Miss Day's tremen- dous singer's yell, that diverts the bullet from heart to sleeve of its victim, almost raises an echo in the audience, so dreadful is the relief. Then come songs and an outsize anti-climax, with the only authentic Hitchcock touch re- maining being the way the gun goes off in Bernard Miles's pocket, shooting him in an unpleasantly circular sort of way as he rolls down the stairs. A curate's egg of a film, but thoroughly recommended.

My feeling for child actors being generally one of distaste, it was a pleasant surprise to meet two engaging small boys on the screen in a single week. The first was in Goodbye, My Lady, a film of remarkable charm, made up of small, intimate touches, sure and exactly suit- able performances, a perfect command of sound—in the Mississippi swamplands—as well as vision, and a delicacy of taste, humour and suggestion rarely met with in a film as robust. Young Brandon de Wilde gives a per- formance at once heartrending and austere— something quite outside the normal scope of a boy his age. Director: William A. Wellman.

The second boy, Colin Petersen, is much younger—around seven or eight, I imagine. Not an actor in the same sense as the brilliant young American,, he is simply a delightful urchin who, in Smiley, produces enough freckled Australian charm to put Chips Raf- ferty and even Ralph Richardson (as a rather fruity parson) in the shade. Few songs can have come from child actors more effectively than Smiley's excruciatingly flat rendering of 'Waltzing Matilda' in a backwoods pub. Pleasant local colour, acceptable sentiment; in the best sense, a cosy film. Director : Anthony Kimmins.