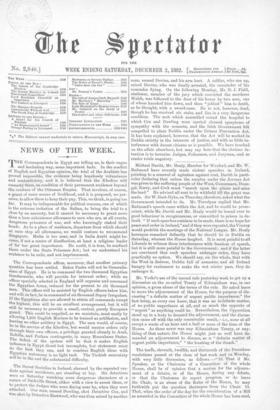 Redmond have recently made violent speeches in Ireland, pointing to a renewal of agitation against rent, Davitt in parti- cular declaring that unless the surplus under the Arrears Act was given to the suffering people of the West, Connemara, Done- gal, Kerry, and Cork must "march upon the plains and seize the land." He advised all rent to be withheld till the grant was made. Sir W. Hart-Dyke, on Thursday,therefore, asked what the Government intended to do. Mr. Trevelyan replied. that Mr. Redmond's speech came within the Act, and he would be prose- cuted; while Mr. Davitt and Mr. Healy would be bound over to good behaviour in recognizances, or committed to prison in de- fault. " If such speeches continue to be made, there is no hope for peace and order in Ireland," and if they were repeated, the Viceroy would prohibit the meetings of the National League. Mr. Healy hereupon remarked defiantly that he should. be in Dublin on Saturday, whereat the House laughed. It is most painful to all Liberals to witness these interferences with freedom of speech, but it is still more painful to the Government; and if the latter are convinced that such speeches endanger order, they have practically no option. We should say, on the whole, that with the West in distress, Dublin full of assassins, and all Ireland hungry for excitement to make the wet winter pass, they do endanger it.