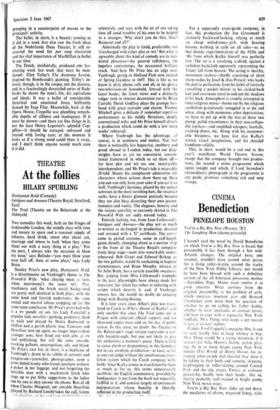 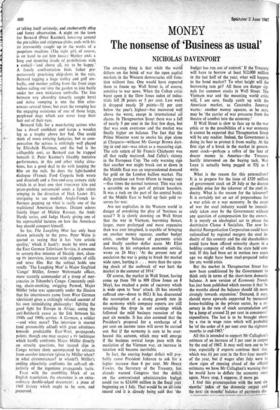 I haven't read the novel by David Benedictus on which You're a Big Boy Now is based, but presumably it has been through a few mid- Atlantic changes. The original hero, one assumes, wouldn't have earned what passes for a living roller-skating around the stacks of the New York Public 'Library; nor would he have been blessed with such a definitive version of the all-American possessive mother —Geraldine Page, Mama toute entiere a sa prole attacluce. What survives from the original, presumably, is the problem of girls, which exercises nineteen year old Bernard Chanticleer even more than the question of whether to go on calling his father daddy, whether to wear spectacles or contact lenses, and how to cope with a repressive New York landlady, Miss Thing, who keeps a pet rooster to tear at visitors' nylons.

Francis Ford Coppola's engaging film, it can he seen, hardly tries to keep whimsy at bay. Miss Thing would be a trying invention, if it weren't for Julie Harris's brittle, stylish play- ing. As in so many bright young New York movies (The World of Henry Orient, for in- stance), when people feel cheerful they show it by taking to their heels and running, skipping, leapfrogging or roller-skating around Central Park and the city streets. Extras, or ordinary passers-by, hardly turn their heads: like us, they're probably well trained in bright young New York movie ways.

You're a Big Boy Now slides up and down the escalators of charm, wayward fancy, stabs

at taking itself 'seriously, and exuberantly etisp and funny observation. A night on the town for Bernard (Peter Kastner), hovering around the pin-tables and striptease clubs; ends with his tie irrevocably caught up in the works of .a peepshow machine. (The right girl, of course, is on hand to cut him loose.) Mother ends a long and daunting tirade of prohibitions with a codicil—`and above all, try to be happy.' A family confrontation finds father pre- posterously practising chip-shots in the rain, Bernard tugging a huge trolley and golf um- brella, and mother yelling from the front steps before sailing out into the garden to join battle under her own miniature umbrella. The line between wry absurdity (exactly caught here) and naive romping is one the film criss- crosses several times; but even the romping has the engaging assistance of one of those large, perplexed dogs which can never keep their hair out of their eyes.

Bernard falls for a man-hating actress who has a dwarf confidant and keeps a wooden leg as a trophy above her bed. One could think of more enticing fantasies; but as com- pensation the actress is strikingly well played by Elizabeth Hartman, and the bed is the collapsible sort, so Bernard can be trapped beneath it. Peter Kastner's likeably tentative performance, in this and other tricky situa- tions, has a good deal to do with keeping the film on the rails. So does the light-handed dialogue (Francis Ford Coppola both wrote and directed) and a free-and-easy camera style which in at least one shot (runaway kite and pram-pushing nursemaid) sends a light salute winging in the direction of Dick Lester. It's intriguing to see modish Anglo-French in- fluences pepping up what is really one of the traditional American themes. Distant echoes faintly linger of Mickey Rooney, the Andy Hardy *series, and Judge Hardy giving one of his reproachful lectures on how the American boy should comport himself.

So far, The Laughing Man has only been shown privately to the press. Peter Weiss is quoted as saying that it has `rare artistic quality,' which it hasn't: made by DEFA and the East German Television ServiPe, it amounts to seventy-five minutes of bleakly shot, close- up Iv interview, intercut with snippets of stills and news film. But the subject holds one totally. `The Laughing Man' is Major Siegfried 'Congo' Muller, former Wehrmacht officer, more recently commander of a troop of mer- cenaries in Tshombe's Congo. Constantly smil- ing, chain-smoking, swigging Pernod, Major Miler (who was apparently under the illusion that his interviewers came from West German television) gives a strikingly relaxed account of his own intimidating philosophy: fighting the good fight for Europe in Africa; seeing the anti-Bolshevik cause as the link between his 1940s and 1960s service. A German, a soldier —and what more? The interview is steered (and presumably edited) with great adroitness towards predictable East-West_ propaganda points; though one may suspect a Tv technique which hardly confronts Major Miller directly on atrocity questions, but instead slips in Congo torture shots accompanied by extracts from another interview (given by Mailer when? in what circumstances? to whom?). Mtiller's smiling objectivity confronts the soft-sell ob- jectivity of the ingenious propaganda tactic. Even with the stumbling block of an English translation, the encounter is an extra- ordinary double-edged document: a piece of 1960 history which ought to be seen, and preserved,