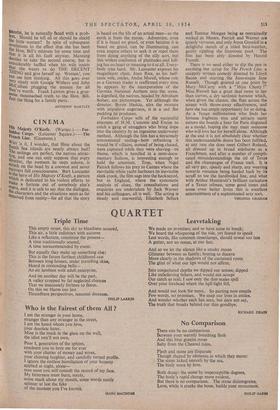 Me Majesty O'Keefe. (Warner.) For-

Theis it, I wonder, that films about the '")uuth Sea islands are nearly always bad? 11:he settings are perfect, the natives aurae- 1..ive, and one can only suppose that every Cluector, the moment he steps ashore, is struck on the head by a coconut and never recovers full consciousness. Burt Lancaster is the hero of His Majesty O'Keefe, a picture which is dedicated to his violent efforts to Make a fortune out of somebody else's copra, and it is safe to say that the dialogue, we characters and the situations seem as far removed from reality—for all that the story is based on the life of an actual man—as the earth is from the moon. Adventure, even if it is based on greed, or even because it is based on greed; can be illuminating, can even inspire others to seek it or repel them from doing anything of the silly sort, but this witless confusion of platitudes and kill- ing has no heart or meaning to it at all. Every- body tries hard. Mr. Lancaster exposes his magnificent chest, Joan Rice, as his half- caste wife, smiles, Andre Morell, whose role as a German trader is reaffirmed every time he appears by the incorporation of the German National Anthem into the score, is dignified, the natives, headed by Abraham Sofaer, are picturesque. Yet although the director, Byron Haskin, stirs the mixture with impulsive eagerness, it is a sad flat pudding he produces.

Forbidden Cargo tells of the successful attempts of H.M. Customs and Excise to catch a gang of smugglers who bring dope into the country by an ingenious underwater method. Although the film has a tiresomely conventional ending—how refreshing it would be if villains, instead of being chased, were captured while they were shaving—its theme, which is handled in a semi-docu- mentary fashion, is interesting enough to hold the attention. True, when Nigel Patrick follows his prey to Cannes where the inevitable white yacht harbours its inevitable sleek crook, the film sags into the hackneyed, but in England, where the systematic analysis of clues, the consultations and enquiries are undertaken by Jack Warner and his colleagues, all is well. The acting is steady and uneventful, Elizabeth Sellars and Terence Morgan being as restrainedly wicked as Messrs. Patrick and Warner are quietly virtuous, and only Joyce Grenfell in a delightful sketch of a titled bird-watcher, gently rippling the histrionic pool. The film has been ably directed by Harold French.

There is no need either to dip the pen in anything but syrup for The French Line, a snappily written comedy directed by Lloyd Bacon and starring the Juno-esque Jane Russell. Though greeted at one point by Mary McCarty with a "Hiya Chesty !" Miss Russell has a great deal more to her than curves, a dry sardonic humour which, when given the chance, she flips across the screen with throw-away effectiveness, and here she has ample opportunity for so doing. As a Texan millionairess who finds her fortune frightens nice and attracts nasty suitors she boards a liner for Paris disguised as a model, hoping she may meet someone who will love her for herself alone. Although at the end it is not absolutely clear whether this understandable desire has been fulfilled, at any rate she does meet Gilbert Roland, all dressed up in broad sideburns as a Frenchman, and after a number of compli- cated misunderstandings the oil of Texas and the champagne of France mell. It is all very gay, speedy and sharp, any weaving towards romance being hauled back by its scruff to toe the hardboiled line, and what with Arthur Hunnicutt's brilliant caricature of a Texan oilman, some good tunes and some even better lyrics this is excellent entertainment of a sophisticated sexy sort.