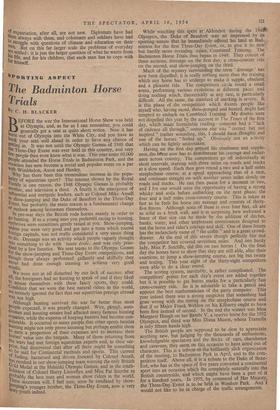 Trials 1 Why has there been this tremendous increase in the popu- rity of equestrian sport? The interest shown by the Royal anilly is one reason, the 1948 Olympic Games is probably another, and television a third. A fourth is the emergence of 1.nfluential and energetic leaders, such as Colonel Mike Ansell 1,.1,1 show-jumping and the Duke of Beaufort in the Three-Day Event, but probably the main reason is a fundamental change of outlook among horsemen themselves. In pre-war days the British rode horses mainly in order to go hunting. If as a young man you preferred racing to hunting, eyebrows were sometimes gently raised at you. Show-jumping, unless you were very good and got into a team which toured foreign capitals, was not really considered a very smart thing to do. Dressage was an activity which people vaguely thought ,Was something to do with ' haute ecole,' and was only prac- tised by a few fanatics. We sent teams to the Olympic Games '6°,_r the show-jumping and Three-Day Event competitions, and though these always performed gallantly and skilfully they never had done enough training to achieve very good results. Much of the mystery surrounding the term dressage ' has now been dispelled; it is really nothing more than the training which any horse has to undergo to make it supple, obedient and a pleasant ride. The competitors circle round a small arena, performing various evolutions at different paces and doing nothing which, theoretically at any rate, is particularly difficult. All the same, the standard of marking is severe. It is this phase of the competition which daunts people like myself who, having raced, show-jumped and hunted, might feel tempted to embark on Combined Training. My doubts were not dispelled this year by the account in The Times of the first day, which made formidable reading—someone had a " lack of cadence all through," someone else was " correct but not inspired " (rather wounding, this, I should have thought) and one of the horses " boiled up." Obviously not an activity which can be lightly undertaken.