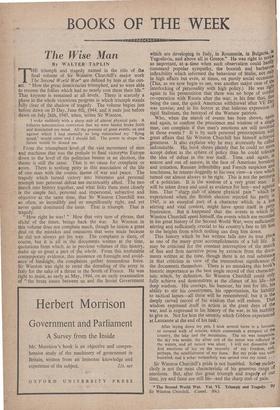 THE triumph and tragedy named in the title of the final volume of Sir Winston Churchill's major work The Second World War* are defined by him at the out- set. " How the great democracies triumphed, and so were able to resume the follies which had so nearly cost them their life." That keynote is sustained at all levels. There is scarcely a phase in the whole victorious progress in which triumph stands fully clear of the shadow of tragedy. The volume begins just before dawn on D Day, June 6th. 1944, and it ends just before dawn on July 26th, 1945, when, writes Sir Winston, I woke suddenly with a sharp stab of almost physical pain. A

hitherto subconscious conviction that we were beaten broke forth and dominated my mind. All the pressure of great events, on and against which I had mentally so long maintained my " flying speed," would cease and I should fall. The power to shape the future would be denied me.

From the triumphant level of the vast movement of men and machines that was the prelude to final victoryein Europe down to the level of the politician beaten in an election, the theme is still the same. That is no cause for complaint or scorn. There is nothing petty in this association of the life of one man with the cosmic theme of war and peace. The tragedy which turned victory into bitterness and personal triumph into personal defeat are inextricably allied. The two march into history together, and what links them most closely is the simple fact, personal and impersonal, subjective and objective at the same time, that Sir Winston Churchill was so often, so incredibly and so magnificently right, and yet never quite dominated the issue. That is triumph. That is tragedy.

" How right he was ! " How that very turn of phrase, that cliché of the times, brings back the war. Sir Winston in this volume does not complain much, though he insists a great deal on the mistakes and omissions that were made because he did not always get his way. The complaint is there, of course, but it is all in the documents written at the time, quotations from which, as in previous volumes of this history, make up so great a part of the whole. From this irrefutable contemporary evidence, this insistence on foresight and avoid- ance of hindsight, the complaints gather tremendous force. Sir Winston was right to resist the denuding of the army in Italy for the sake of a thrust in the South of France. 'He was right to insist, as early as May, 1944, on an early examination of " the brute issues between us and the Soviet Government which are developing in Italy, in Roumania, in Bulgaria. Yugoslavia, and above all in Greece." He was right to notice as important, at a time when such observation could Wadit eommand popular sympathy, the boorish and barbarous inflexibility which informed the behaviour of Stalin, not Ow in high affairs but even, at times, on purely social occasiolil (This, as we now begin to see, was another major case of the interlocking of personality with high policy.) He was rigihai again in his premonition that there was no hope of cord, co-operation with Russia after the war; in his fear that, 1113` being the case, the quick American withdrawal after VE Day was unwise; and in his horror at that hideous expression 0 rigid Stalinism, the betrayal of the Warsaw patriots. Who, when the march of events has been shown, again and again, to confirm the prescience and wisdom of a man, can complain if that man's emotions are still involve in those events ? It is by such personal preoccupation with, great affairs that Sir Winston Churchill has himself achievee, greatness. It also explains why he may accurately be called Indomitable. His book shows plainly that he could no more accept defeat in the sphere of policy than he could tolerate the idea of defeat in the war itself. Time and again, in season and out of season, in the face of American boredoe; and irritation, Russian inflexibility and French suspicion 80 touchiness, he returns doggedly to his-own view—a view which turned out almost always to be right. This is not the pettiness of a politician. It is the wisdom of a very great man. It, will be taken down and used as evidence for him—and against him. That " sharp stab of almost physical pain " which he experienced when the British electors rejected his party ie 1945, is an essential part of a character which, in a less stirring and vital context, might have spent itself in petty frustration. But it happened that the events in which Sir, Winston Churchill spent himself, the events which are recorder' in his great history of the Second World War, were sufficiently stirring and sufficiently crucial to his country's fate to lift bile to the heights from which nothing can drag him down. This history which he has written falls into its true place as one of the many great accomplishments of a full life. It may be criticised for the constant interruption of the march of fine and firm narrative prose by extracts from the doce' ments written at the time, though there is no real substance in that criticism in view of the tremendous significance/ of the documents themselves. There is no mistaking this books historic importance as the best single record of that character' istic which, by definition, Sir Winston Churchill could only fully achieve and demonstrate at the climax of his life—his deep wisdom. His courage, his humour, his zest for life, his ability to stir his countrymen, his opportunism, his liability to tactical lapses—all these will be remembered; but it is the deeply carved record of his wisdom that will endure. That wisdom expressed itself in action in the great days of the war, and is expressed in his history of the war, in his inability to give in. Not for him the serenity which Gibbon experienced at Lausanne at the end of his task: After laying down my pen, I took several turns in a berceath or covered walk of acacias, which commands a prospect of fh• country, the lake and the mountains. The air was temperato, the sky was serene, the silver orb of the moon was reflected is the waters, and all nature was silent. I will not dissemble lb! first emotions of joy on the recovery of my freedom, anal perhaps, the establishment of my fame. But my pride was soon

humbled, and a sober melancholy was spread over my mind. •

Sir Winston Churchill's pride is not humbled. Sober melee: choly is not the most characteristic of his generous range 01 emotions. But, after this great triumph and tragedy of our time, joy and fame are still his—and the sharp stab of pain.