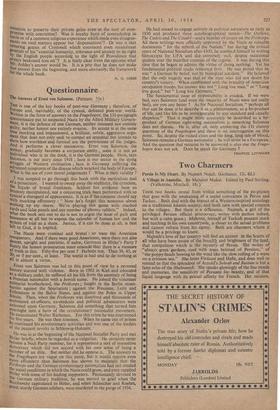 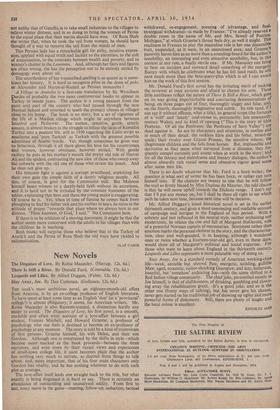 THESE two books reveal from within something of the poignancy that goes with the awakening of a social conscience in Persia and Turkey. Both deal with the impact of a Western-inspired sociology on a traditional Islamic society, and both turn with special concern to the villages. But there is a difference. Najmeh, a girl of the privileged Persian official aristocracy, writes with pathos indeed, but with a calm grace ; Mahmut, himself of Turkish peasant stock and teaching in his own countryside, is closer to. the actual problems and cannot refrain from his agony. Both are charmers whom it would be a privilege to know.

not unlike that of Gandhi, is to take small industries to the villages to relieve winter distress, and in so doing to bring the women of Persia to the equal place that their merits should have won. Of Reza Shah she writes that, when he took the veil from women, he should have thought of a way to remove the veil from the minds of men.

This Persian lady has a remarkable gift for pithy, intuitive expres- sion, applied with equal truth and facility to the eternities, to the cult of assassination, to the contrasts between wealth and poverty, and to women's chatter in the Lammam. And, although her facts and figures are often wrong, she has the perception not to be entirely misled by demagogy even about oil.

The unorthodoxy of her transcribed spelling is as quaint as is some times her history. It is hard to recognize pilau in the dress of polo, or Alexander and Harun-al-Rashid as Persian monarchs 1 A Village in Anatolia is a first-rate translation by Sir Wyndham Peedes of probably the two most controversial books to appear in Turkey in recent years. The author is a young peasant from the most arid part of the country who had passed through the new Noimal School and returned to teach the primary classes in villages close to his home. The book is no story, but a set of vignettes of the life of a Muslim village which might be anywhere between Istanbul and Peshawar. The author, sensitive, gentle, utterly sincere, is almost broken in the struggle to infuse the ideas of Kemalist Turkey into a peasant life, still in 1950 regarding the Latin script as anathema and 'pure Turkish' as Turkish with the greatest possible admixture of Arabic words. Yet, though sometimes he gives way to bitterness, through it all there glows his love for his countrymen and women, however obstinate, however misled.' With gentle raillery he puts in his mother's mouth the pretty old tale of Hazrat Ali and the spiders, contrasting the new idea of those who sweep away the cobwebs with the old one of those who revere the insect. And he does not give up.

His bitterest fight is against a corrupt priesthood, exploiting for their own gain the simple faith of a deeply religious people. All this, of course, is grist for the Communist mill. But Mahmut himself bears witness to a deeply-held faith without its accretions, and it is hard not to be irritated by the constant footnotes of the editor, explaining that here and there the young zealot is exaggerating. Of course he is. Yet, when in time of famine he comes back from ploughing to find his father sick and his mother in tears, he turns in the attitude of prayer "towards that place where we always turn in our distress, 'Thou knoweSt, 0 God,' I said." No Communist here.

If there is to be criticism of a moving document, it might be that the author seems more concerned with the adults in his villages than with the children he is teaching.

Both books will surprise those who believe that in the Turkey of Atattirk and the Persia of Reza Shah the old ways have yielded to rationalisation.