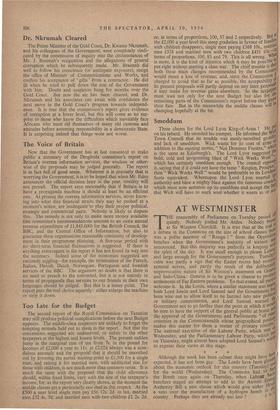 The Prime Minister of the Gold Coast, Dr. Kwame Nkrumah,

and his colleagues of the Government, were completely vindi- cated by the commission of inquiry into the circumstances of Mr. J. Braimah's resignation and the allegations of general corruption which he subsequently made. Mr. Braimah did well to follow his conscience (or anticipate exposure), resign the office of Minister of Communications and Works, and confess his acceptance of ' gifts ' from a contractor. He did ill when he tried to pull down the rest of the Government with him. Doubt and suspicion hung for months over the Gold Coast. But now the air has been cleared, and Dr. Nkrumah and his associates can await with confidence the next move in the Gold Coast's progress towards independ- ence. It is true that the commission's report gives evidence of corruption at a lower level, but this will come as no sur- prise to those who know the difficulties which inevitably face Africans who must rid themselves of many old customs and attitudes before assuming responsibility in a democratic State. It is surprising indeed that things were not worse.