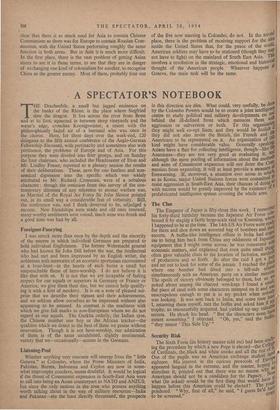 Page 6, 30 April 1954 — Whether anything very concrete will emerge from the " little
Close

Whether anything very concrete will emerge from the " little

Geneva " at Colombo, where the Prime Ministers of India, Pakistan, Burma, Indonesia and Ceylon are now in some- what impromptu conclave, seems doubtful. It would be logical if the threat of Communist expansion in South-East Asia were to call into being an Asian counterpart to NATO and ANZUS; but since the only nations in the area who possess anything worth talking about in the way of military resources—India and Pakistan—are the least directly threatened, the prospects