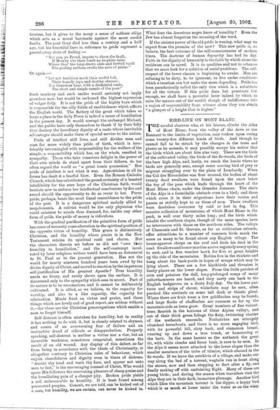 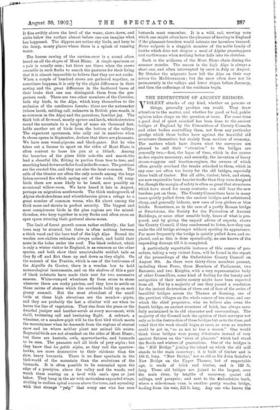 THE careful observer who, at his leisure, climbs the sides of Mont Blanc, from the valley of the Arve or the Bonnant to the limits of vegetation, may reckon upon seeing some twenty-five different kinds of birds. And though he cannot fail to be struck by the changes in the trees and plants as he ascends, it may possibly escape his notice that the birds which are about him also vary. There are the birds of the cultivated valley, the birds of the fir-woods, the birds of the bare high Alps, and, lastly, we reach the limits where no birds are generally seen, except some soaring bird of prey or migrant struggling over to the plain of Lombardy. When the Col des Hirondelles was first crossed, the bodies of about twenty dead swallows were found upon the snow below the top of the pass which leads through the heart of the Mont Blanc chain, under the Grandes Jorasses. The chain of the Alps is a formidable obstacle even to a bird; and those which cross it in their migrations have their routes and passes as strictly kept to as those of men. These swallows were doubtless overcome by cold or lost in fog. This massive collection of mountains, of which Mont Blanc is the peak, is well over thirty miles long; and the birds which inhabit the southern slopes, though of the same species, have no intercourse with those on the northern sides. The valleys of Chamonix and St. Gervais, as far as cultivation extends, offer attractions to a number of common birds much the same as many to be found about any English village. The house-sparrow chirps on the roof and finds his food in the road. Swallows and house-martins arrive regularly every spring to neat, and in fine weather hawk for flies at great heights up the side of the mountains. Robins live in the thickets and hang about the back-yards in hopes of scraps which may be lying about. There are a few blackbirds and thrushes in bushy places on the lower slopes. From the little patches of corn and potatoes the dull, long-prolonged songs of many yellowhammers are heard, and they carry one back to the English hedgerows on a dusty July day. On the lower pas- tures and strips of clover, whinchats may be seen, often perched like sentinels on some tall dock or thistle plant. Where there are fruit trees a few goldfinches may be found; and large flocks of chaffinches are common as far up the mountain-side as trees grow. Great numbers of fine walnut- trees flourish in the bottoms of these Alpine valleys, and out of their thick green foliage the fluty, twittering chatter of the nuthatch resounds. Nuthatches are strangely abundant hereabouts, and there is no more engaging bird, with its powerful bill, slaty back, and cinnamon breast, running up and down a tree trunk, or hammering at the bark. In the same haunts as the nuthatch the great tit, with white cheeks and fierce beak, is sure to be seen. In the Alps it seems more attached to the lower slopes than the smaller members of the tribe of titmice, which abound in the fir-woods. If we leave the outskirts of a village, and make our way along the bed of a torrent, wagtails run in front along the stones, now and then stopping to dart after a fly, and finally making off with undulating flight. Many of these are young birds; and during the season when travellers visit the Alps they are in their dark, immature plumage. Another bird which likes the mountain torrent is the dipper, a happy bird which is as much at home Wider the water as on the wing.

It flies swiftly above the level of the water, slows down, and sinks below the surface almost before one can imagine what has happened. The dippers are rather shy birds, and keep to the damp, mossy places where there is a splash of running water.

The hoarse cawing of the carrion-crow is a sound often heard on all the slopes of Mont Blanc. A single specimen or a pair is usually seen; but there are times when the crows assemble in such flocks to search the pastures for their living that it is almost impossible to believe that they are not rooks. When a couple of hundred crows are gathered together, as sometimes happens, it is only by the slight difference in their cawing and the great difference in the feathered bases of their beaks that one can distinguish them from the gre- garious rook. There are two other members of the Corvidae, both shy birds, in the Alps, which keep themselves to the seclusion of the coniferous forests: these are the nutcracker (whose harsh, rattling call, unknown in British pine-woods, is so common in the Alps) and the garrulous, familiar jay. The thick belt of fir-wood, mostly spruce and larch, which stretches round the mountain to a height of some six thousand feet, holds another set of birds from the bottom of the valleys. The expectant sportsmen, who sally out in numbers when la chaise opens in September, declare that there are pheasants. We have seen wood-pigeons and black-game. But he who takes out a license to sport on the sides of Mont Blanc is often content to loose his gun at a titlark. Among the branches of the pines little tole-tits and marsh-tits lead a cheerful life, flitting in parties from tree to tree, and searching head downwardi for food in the fir-cones. The prettiest are the crested tits, and they are also the least common. The ealls of the titmice are often the only sounds among the huge lichen-covered firs which spring out of the rocks. Of song- birds there are none likely to be heard, save possibly an occasional willow-wren. We have heard it late in August, perhaps on migration southwards. The thick undergrowth of Alpine rhododendrons and whortleberries gives a refuge to a great number of common wrens, who flit about among the thick moss and shrubs in perfect security. The biggest and most conspicuous birds in the pine regions are the missel- thrushes, who keep together in noisy flocks and often cross an open space uttering their guttural alarm-notes.

The limit of forest growth comes rather suddenly; the last trees may be stunted, but there is often nothing between a thick wood and the bare turf of the high Alps. Round the wooden cow-chfilets redstarts always collect, and build their nests in the holes under the roof. The black redstart, which is only a winter visitor to England, is as common as the other species, and both show their unmistakable reddish tails as they fly off and flirt them up and down as they alight. On the summit of the Prarion, which is one of the buttresses of the Aiguille du Gouter, there is a wooden box to hold meteorological instruments, and on the shelves of this a pair of black redstarts have made their nest for two successive seasons. White-rumped wheatears fly from stone to stone wherever there are rocky patches, and they love to settle on those cairns of stones which the cowherds build up on each grassy summit. But the most abundant of the small birds at these high elevations are the meadow —pipits, and they are probably the last a climber will see when he leaves the line of vegetation. They rise from the grass or the dwarfed juniper and heather-scrub at every movement, with shrill, twittering call and hesitating flight. A redstart, a wheatear, or a meadow-pipit will be the first bird which meets the mountaineer when be descends from the regions of eternal snow and ice where neither plant nor animal life exists. Raptorial birds are not abundant on the sides of Mont Blanc ; but there are kestrels, owls, sparrowhawks, and buzzards to be seen. The peasants call all birds of prey aigles ; but they know that les .petits aigles, as they call the sparrow- hawks, are more destructive to their chickens than the slow, heavy buzzards. There is, no finer spectacle in the bird-world of the mountain than the evolutions of the buzzards. It is often possible to lie concealed upon the edge of a precipice, above the valley and the woods, and watch them soaring on a level with one's eyes or just below. They bang in the air with motionless expanded wings, circling in endless spiral curves above the trees, and squealing with that strange "yelp" that every one who has seen buzzards must remember. It is a wild, sad, mewing note which one might often have the pleasure of bearing in England if the pheasant-breeders would tolerate the harmless buzzard. Bute° vulgaris is a sluggish member of the noble family of hawks which does not despise a meal of Alpine grasshoppers and earthworms when nothing better falls into its clutches.

Such is the avifauna of the Mont Blanc chain during the summer months. The season in the high Alps is always a short one, and often interrupted by snow in July or August. By October the migrants have left the Alps on their way across the Mediterranean ; but the snow often does not lie permanently in the valleys and lower slopes before January, and then the sufferings of the residents begin.