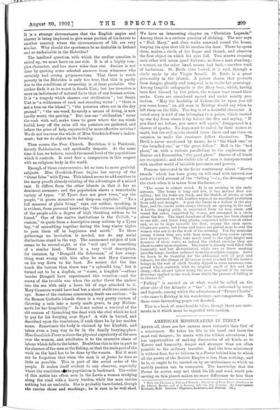 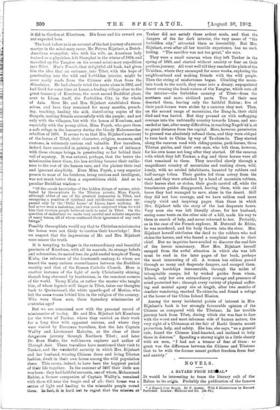 AFTER all, there are few careers more romantic than that of a missionary. He takes his life in his hand and faces the most real dangers ; he meets with the wildest adventures; he has opportunities of making discoveries of all kinds as to Nature and humanity, deeper and stranger than are often possible to the ordinary traveller. And the true missionary is without fear, for he believes in a Power behind him to which all the power of the British Empire is less than nothing; and he is, or ought to be, carried on by an enthusiasm to which no earthly passion can be compared. The knowledge that the Power be serves may not think his life and work worth pre- serving on this planet makes no more difference to him than • With the Tibetans in Tent and Temple : Narrative of Four Yeard Renblenee on the Tibetan Border, .nd of a Journey into the Far Interior. By Susie Careen Riinhart, M.D. London Oliphant, Anderson, and Ferries. 16..]

it did to Gordon at Khartoum. His fame and his reward are not expected here.

' The book before us is an account of the last journey of a recent martyr in the missionary cause, Mr. Petrus Rijnhart, a Dutch- American evangelist, who with his wife, an American lady trained as a physician, left Shanghai in the winter of 1894, and travelled up the Yangtse on his second missionary expedition into Tibet. Hue's Travels, that delightful old book, had given Lim the idea that an entrance into Tibet, with the hope of penetrating into the wild and forbidden interior, might be more easily made from the Chinese side than from the Himalayas. He bad already tried the route alone in 1892, and had lived for some time at Lusar, a trading village close to the great lamasery of Kumbum, the most sacred Buddhist place, next to Lhasa itself, the Forbidden City, in the whole of Asia. Here Mr. and Mrs. Rijnhart established them- selves, and here they remained for many months, preach- ing, teaching, healing the sick, distributing copies of the Gospels, making friends successfully with the people ; and not only with the villagers, but with the lamas of Kumbum, and especially with the young abbot, Mina Fuyeh, who gave them a safe refuge in the lamasery during the bloody Mahommedan rebellion of 1895. It seems to us that Mrs. Rijnhart's account of the lamas of Tibet, their character, religion, manners, and customs, is extremely curious and valuable. Few travellers, indeed, have succeeded in gaining such a degree of intimacy with these strange beings, in penetrating so far behind their veil of mystery. It was natural, perhaps, that the better the missionaries knew them, the less striking became their unlike. ness to the rest of the human race, and the plainer their real and ignorant simplicity. Even Mina Fuyeh, a very superior person to most of his brethren, being curious and intelligent, was not much better than a superstitious child. And as to peculiar Buddhist wisdom-

" Of the occult knowledge of the hidden things of nature, attri- buted by theosophists to the Tibetan priests, Mina Fuyeh, although abbot of one of the greatest lamaseries in Tibet, and occupying a position of spiritual and intellectual eminence sur- passed only by the 'Dalai Lana' at Lhasa, knew nothing. He had never seen a mahatma, and was much surprised when we told him that western people believed such to exist in Tibet. On the question of mahatmas we made very careful and minute enquiries of many lamas, all of whom confessed their ignorance of any such beings."

Possibly theosophists would say that to Christian missionaries the lamas were not likely to confess their knowledge ! But we suspect that the impressions of Mr. and Mrs. Rijnhart were nearer the truth.

It is tempting to linger in the extraordinary and beautiful precincts of Kumbum, with all its marvels, its strange beliefs and solemnities, its sacred tree, its gold-roofed temple of Tsong K'aba, the reformer of the fourteenth century, to whom are traced the many curious resemblances between the Buddhist worship and that of the Roman Catholic Church. Here is another instance of the light of early Christianity shining, though long obscured by heathenism, in the remotest corners of the world. Tsong K'aba, or rather the master who taught him, of whom legends still linger in Tibet, takes our thoughts back to Quetzalooatl, the white apostle-god of Mexico, who left the same traces behind him in the religion of the country. Who were these men, these legendary missionaries of centuries ago?

But we are concerned now with the personal record of missionaries of to-day. Mr. and Mrs. Rijnhart left Kumbum for the town of Tanker, where they carried on their work for a long time with apparent success, and where they were visited by European travellers, first the late Captain Wellby and Lieutenant Malcolm, at the close of their dangerous journey through Northern Tibet ; and later Dr. Sven Hain, the well-known explorer and author of Through Asia. These travellers have mentioned their visit to Tanker, and the wonderful security in which Mrs. Rijnhart and her husband, wearing Chinese dress and living Tibetan fashion, dwelt in their own house among the wild population there. This seems, indeed, to have been the happiest period of their life together. In the summer of 1897 their little son was born : they had faithful servants, one of whom, Mohammed Rollin, a former companion of Captain Wellby's, remained with them till near the tragic end of all : their house was a centre of light and healing to the miserable people round them. In fact, it is hard net to regret that the mission at

Tanker did not satisfy these ardent souls, and that the dangers of the far dark interior, the very name of "the forbidden city," attracted them so irresistibly. But Mrs. Rijnhart. even after all her terrible experience, has no such feeling. "The sacrifice was not too great," she says.

They were a small caravan when they left Tankar in the spring of 1898, and started without anxiety or fear on their perilous journey. All went well till they reached the plain of the Ts'aidam, where they encamped for some weeks, exploring the neighbourhood and making friends with the wild people.

Then the string of misfortunes began. Climbing the moun- tain track to the south, they came into a dreary, unpopulated desert crossing the head-waters of the Yangtse, which cuts off the interior—the forbidden country of Tibet—from the northern and more civilised parts. Two of their men deserted them, leaving only the faithful Rahim ; five of their pack-horses were stolen by a caravan they met. Then, on the second range of mountains, the Ding-la, their child died and was buried. But they pressed on with unflagging courage into the unfriendly country towards Lhasa, and suc-

ceeded at last, after many difficulties, in reaching Nagch'uk'a, at no great distance from the capital. Here, however, permission to proceed was absolutely refused them, and they were obliged to turn back to China by way of Ta chien-lu. They started along the caravan road with riding-ponies, pack-horses, three Tibetan guides, and their own man, who left them, however, for his own home not long after they started. Of the caravan with which they left Tanker, a dog and three horses were all that remained to them. They travelled slowly through a magnificent country of mountains and rushing rivers, wild, lonely, with no settled inhabitants, haunted by robbers and half-savage tribes. Their guides led them astray from the road, and they were attacked by a band of mountain robbers, their horses shot or stolen, their goods carried off, while the treacherous guides disappeared, leaving them, with one old horse they had managed to save, alone in the desert. Still they did not lose courage, and we have seldom read more simply vivid and inspiring pages than these in which Mrs. Rijnhart tells the story of the last desperate hours. Very soon she was left literally alone, for her husband, seeing some tents on the other side of a hill, made his way to them in search of help, and never returned to her. Probably, as in the case of the French explorer, M. Dutreuil de Rhins, he was murdered, and his body thrown into the river. Mrs. Rijnhart herself attributes the deed to the robbers who had stolen the horses, and who feared a complaint made to their chief. But no inquiries have availed to discover the real fate of the heroic missionary. How Mrs. Rinehart herself escaped from the awful situation in which she was left must be read in the later pages of her book, perhaps the most interesting of all. A woman has seldom passed through so many and desperate dangers, and escaped them. Through hardships innumerable, through the midst of inhospitable camps,' led by wicked guides from whom, indeed, only her own extraordinary courage and presence of mind protected her ; through every variety of physical suffer- ing and mental agony she at length, after two months of desolate wandering, reached Ta-ohien-lu, and found a refuge at the house of the China Inland Mission.

Among the many incidental points of interest in Mrs. Rijnhart's book is her strongly favourable opinion of the Chinese as compared with the Tibetans. In her terrible journey back from Tibet, during which she was face to face with the worst and most inhuman side of human nature, the very sight of a Chinaman at the fair of Rashi Gomba meant protection, help, and safety. She has, she says, "as a general rule, found the Chinese kind-hearted, and inclined to help those in distress." Spending a stormy night in a little shanty with six men, "I had not a tremor of fear of them : so great was the difference between the Chinese and Tibetans that to be with the former meant perfect' freedom from fear and anxiety."