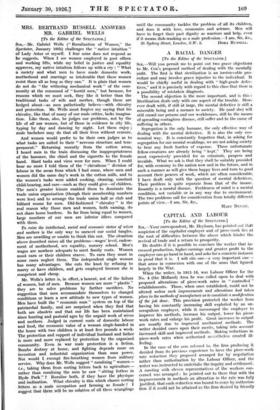 [To the Editor of the SPECTATOR.] &a,—Mr. Gabriel Wells (" Ruralization of Women," the Spectator, January 16th) challenges the "native intuition" of Lady Astor or myself. I fear mine does not respond as lie suggests. When I see women employed in post offices and working lifts, while my belief in justice and equality approves, my native intuition follows up with a *cry : " What a society and what men to have made domestic work., motherhood and marriage so intolerable that these women resist them all as long as they can:" It is plain that women do not do "the withering mechanical work" of the com- munity at the command of "horrid men," but because, for reasons which we must seek, they like it better than the traditional tasks of wife and mother, though these are hedged about—as men pathetically believe—with chivalry and protection. Mr. Wells must forgive my saying that his chivalry, like that of many of our male critics, lacks imagina- tion. Like them, also, he judges our problems, not by the life of all our women, but of those in evidence in city life, typing by day and dancing by night. Let them enjoy ; male bachelors may do that all their lives without censure.

And women would prefer to be their own judges as to what tasks are suited to their "nervous structure and tem- perament." Returning recently from the cotton areas, I heard men in the train discussing the inappropriateness of the hammer, the chisel and the cigarette to the female hand. Hard tasks and vices were for men. When I could bear no more I told them of the " chivalrous " division of labour in the areas from which I had come, where men and women did the same day's work in the cotton mills, and to the women's tasks were added cooking, cleaning, 'constant child-bearing, and care—such as they could give—of children. The men's greater leisure enabled them to dominate the trade union organization (though their membership numbers were less) and to arrange the trade union hall as club and billiard rooms for men. Old-fashioned " chivalry" is the real reason why those men and women, both earning, do not share home burdens. So far from being equal to women, large numbers of our men are inferior idlers compared with them.

To raise the intellectual, social and economic status of wives and mothers is the only way to unravel our social tangles. Men are unwilling or unable to think this out. The situation above described raises all the problems—wages' level, endow- ment of motherhood, sex equality, nursery school. Men's wages are nowhere adequate to meet family costs. Women must earn or their children starve. To earn they must in some cases neglect them. The independent single woman has many advantages. She cuts the knot by refusing to marry or have children, and gets employed because she is competent and cheap.

Mr. Wells's letter is, in effect, a lament, not of the failure of women, but of men. Because women are more " plastic " they are to solve problems by further sacrifices. No suggestion that men accommodate themselves to changed conditions or learn a new attitude to new types of women. Men have built the economic man" system on top of the patriarchal family, and are surprised when they find that both are obsolete and that our life has been maintained since hunting and pastoial ages by the unpaid work of wives and mothers. Judged in current costs of domestic labour and food, the economic value of a woman single-handed in the home with two children is at least five pounds a week. The protection and support of individual husband and father is more and more replaced by protection by the organized community. Even in war male protection is a fiction. Bombs destroy at home, and fighting depends more on invention and industrial organization than man power. Nor would I. .exempt fire-breathing women from military service. Why does Mr. Wells suggest " ruralizing " women- i.e., taking them from sorting letters back to agriculture— rather than ruralizing the men he saw "sitting listless in Hyde Park" ? Ruralize both, if they have the physique and inclination. What chivalry is this which classes sorting letters as a male occupation and farming as female ? I suggest that there will be no solution of all these wranalinks until the community tackles the problem of all its children, and does it with love, economics and science. Men will have to forget their past dignity as warriors and help, even if it means dish-washing as a male profession.—! am, Sir, &c., 31 Sydney Street, London, S.W . 3. DORA RUSSELL.