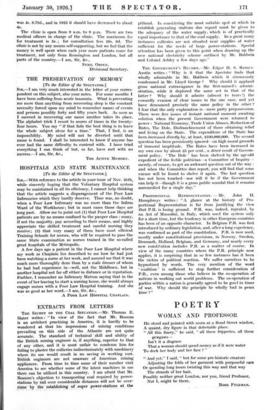 SIR,—With reference to the article in your issue of Nov. 28th, while sincerely hoping that the Voluntary Hospital system may be maintained in all its efficiency, I cannot help thinking that the article suggests a disparagement of the Poor Law Infirmaries which they hardly deserve. Time was, no doubt, when a Poor Law Infirmary was no more than the Infirm Ward of the Workhouse ; but in most cases those days are long past. Allow me to point out (1) that Poor Law Hospital patients are by no means confined to the pauper class ; many, if not the majority, pay according to their means, and highly appreciate the skilled treatment and careful nursing they receive ; (2) that very many of them have most efficient Training Schools for nurses, who will be required to pass the same State examination as nurses trained in the so-called great hospitals of the Metropolis.

A few days ago a patient in the Poor Law Hospital where my work as Chaplain lies described to me how he had just been watching a nurse at her work, and assured me that it was much more thoroughly done than by a male dresser of whom he had had experience in—well, not the Middlesex, but in another hospital not far off either in distance or in reputation. Further, I remember an Infirmary Matron saying that in the event of her leaving to start a nursing home, she would always engage nurses with a Poor Law Hospital training. And she was as good as her word.—! am, Sir, &c., A POOR LAW HOSPITAL CHAPLAIN.