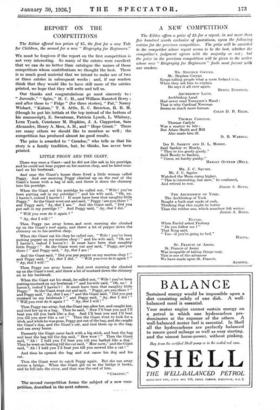 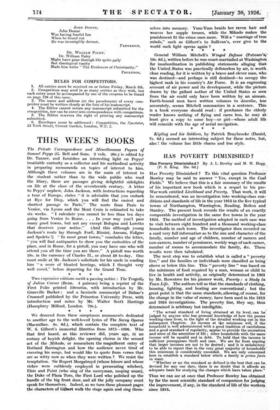 The Editor offers a prize of £5 for a report, in not more Than five hundred words exclusive of quotations, upon the following entries for the previous competition. The prize will be awarded to the competitor whose report seems to be the best, whether the competitor's judgment agrees with the majority or not ; but the prize in the previous competition will be given to the writer whose new "Biography for Beginners" finds most favour with our readers.

Keeps telling people what a mess Ireland is in. When they ask him to explain

He says it all over again.

Archbishop Laud Had never read Tennyson's Maud : That is why Cardinal NOWNIall

Seems so much more human.

Thomas Carlyle Was a martyr to bile But Adam Smith and Mill Also made him ill. D. B. WARDLE.

"This is interesting, but slow," he confessed, And retired to rest. JESSIE S. BOYD.

THE ARCHBISHOP OF YORK.

The Archbishop of York Bought a bath-mat made of cork, Thinking that this might be better Than the rubber one, which somehow felt wetter.

E ucr.m. When Euclid asked Ptolemy "Do you follow me ? " That King said,

St. Francis of Assisi Was incapable of taking things easy.

This is one of the advances We have made upon St. Francis. Ansrritn. BERYL EGERTON.

Was having fearful fun When he found out

He was incorrigibly devout. PARNASSUS.

Dr. William Paley Might have gone through life quite gaily But theological vanity Made him write "The Evidences of Christianity."

1. All entries must be received on or before Friday, March 5th. 2. Competitors may send in as many entries as they wish, but each entry must be accompanied by one of the coupons to be found on page 198 of this issue.

3. The name and address (or the pseudonym) of every com- petitor must be written clearly at the foot of his manuscript.