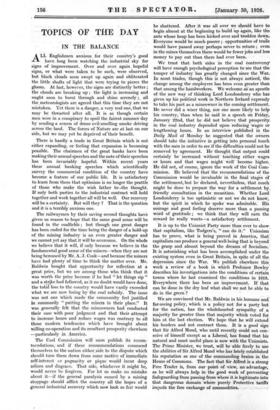 A LL Englishmen anxious for their country's good have, long ,been watching the industrial sky for signs of improvement. Over, and over. again hopeful signs, or what were , taken to be such, were observed, but black. clouds soon swept up V again and obliterated the little shafts of light that were trying to pierce the gloom. At last, however, the signs are distinctly better ; the clouds are breaking up ; the light is increasing and ought soon to burst through and shine serenely ;, all the .meteorologists are agreed that this time they are, not mistaken. Yet there is a danger, a very real one, that we may be thwarted after all.. It is as though certain men were in a conspiracy to spoil the fairest summer day by sending a screen of dense evil-smelling smoke driving across the land. The forces of Nature are at last on our side, but we may yet be deprived of -their benefit.

There is hardly a trade in Great Britain whieh is not either expanding, or -feeling that expansion - is becoming possible. The chairmen of the V great banks have been making their annual speeches and the note of their speeches has been invariably hopeful. Within recent years these annual banking speeches which scientifically survey the commercial condition of the country have become a- feature of our public life. It is satisfactory to learn from them that optimism is no longer the prattle of those who make the wish father to .the thought. If only both parties to the industrial contract will hold together and work together all will be well. Our recovery will be a certainty. But will they ? That is the question and it is a terribly anxious one.

The railwaymen by their saving second thoughts have given us reason to hope that the same good sense will be found in the coalfields ; but though one great danger has been ended for the time being the danger of a hold-up of the mining industry is an even greater danger and we cannot yet say that it will be overcome. On the whole we believe that it will, if only because we believe in the fundamental good sense of the miners--when they are not being bemused by Mi. A...J. Cook—and because the miners have had plenty of time to think the matter over. Mr. Baldwin knight that opportunity for reflection V at a great price, but we are among those who think that it was worth the price because if he had "let things rip" and a strike had followed, as it no doubt would have done, the total loss to the country would have vastly exceeded what we are now losing by the coal subsidy. The issue was not one which made the community feel justified in summarily "putting the miners in their place." It was generally felt that the mineowners had conducted their case with poor judgment and that their attempt to increase hours and reduce wages was contrary to all those modem tendencies which have brought about willing co-operation and its resultant prosperity elsewhere —particularly in America.

The Coal Commission will soon publish its recom- mendations,' and if these recommendations commend themselves to' the nation either side to the dispute which should turn them down from some motive of immediate self-interest or pugnacity or pique would incur deep odium and disgrace. That side, whichever it might be, would never be forgiven. For let us make no mistake about it—if the general paralysis caused by a mining stoppage should afflict the country all the hopes of a general industrial recovery which ,now look so fair would be shattered. After it was all over we should have to begin almost at the beginning to build up again, like the ants whose heap has been kicked-over and trodden down. Everyone would be much-poorer ; opportunities of trade would have passed away perhaps never to return ; even• in the mines-themselves there would-be fewer jobs and less money to pay out than there had ever been. • - We trust -that both - sides in the coal dontroVerst will have enough psychological perception to tee that the temper of industry has greatly changed since the War. In most tiades, though this is not always noticed, the change among the- employers has been -even greater than that among the' handWorkers: We Welcome dean apostle of the new -Way of thinking Lord Londonderry who has given 'up his- political work Northern Ireland expressly to take his part as 'a mineownei in the coming Settlement. He never did a- wiser thing, nor one more -likely to help his country, than When he Said in a speech On Friday, January 22nd, that he did riot believe that prosperity, in the eoal -industry depended upon redneind 'Wages' or lengthening hours. In an interview published in the Daily Mail of Monday he suggested that the owners should take the initiative in getting into personal toiler' with the Men in order tO tee if the difficulties Could not be remOved by agreement. He thought that output could certainly be" increased without'. tOuhing . either . wages. or hours and that wages inight - Well' beccithe higher.: He did not, of Course, ignore the work of the Coal Com:2 mission. He believed that' the recommendations of the Commission would be invaluable in the final 'stades Of .the settlement, hut he declared; nevertheless, that Much might be done to prepare the *ay for a settlement by friendly consultation in the Meantime. Whether Lord. Londonderry is too optimistic or not we do not know, but the spirit in which he spoke was admirable. HIS cOnrage and good feeling deserve more than a passing Wdid of gratitude ; we think that they will earn the reward he really wants---a satisfactory -settlement. _ It is up to the Unionist Party more than ever to show that capitalism, like Todgers's, "can. dO it." Unionism has to prove, what is being proved in America, that capitalism can produce a general well-being that is beyond the grasp and almost beyond the dreams of Socialism.1 It is astonishing what has been accomplished under the existing system even in Great Britain, in .spite of all the depression ,since . the War. We publish elsewhere this week a review of a book in which Professor Bowley. describes his investigations into the conditions of certain towns where he last examined the conditions in 1913. Everywhere, there has been an improvement. If .that can be done in the dry leaf what shall we not be able to.

We are convinced that Mr. Baldwin in his humane and far-seeing policy, which is a policy not for a- party but for the nation, has the wholehearted sympathy of majority far greater than that majority which voted for, him at the last election. We hope that he will extend, his borders and not contract them. It is a good sign' that Sir Alfred Mond, who until recently could not . con- eeive of himself except- as a Liberal, has found that his natural and most -useful place is now with the Unionists. The Prime Minister, We trust, will be able freely to use the abilities of Sir Alfred Mond who has lately established his reputation as one of the commanding brains in the House of Commons. The fact that Sir Alfred is a strong Free -Trader is, from our point of view-, an advantage, as he will always help in the good work of preventing: Safeguarding from passing from where it is legitimate into that dangerous domain where purely Protective tariffs impede. the free exchange of commodities. - -