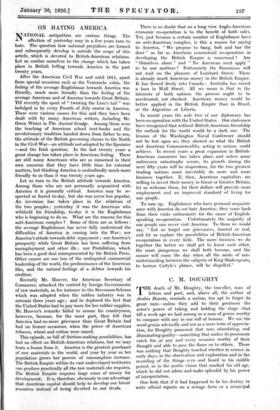 VATIONAL antipathies are curious things. The affection of yesterday may in a few years turn to hate. The question how national prejudices are formed, and subsequently develop is outside the scope of this article, which is devoted to British-American relations. Let. us, 'confine ourselves to the change which has taken place in British feeling towards America in the past twenty, years; .

After the American Civil War and until 191-I, • apart from special occasions such as the Venezuela crisis, the feeling of the average Englishman towards America was friendly, much more friendly than the feeling of the average American and of America towards Great Britain. Till recently the sport of "twisting the Lion's tail" was indulged in by every Fourth of July orator in America. There were various causes for this and they have been dealt with by many American writers, including Mr. Owen Wister in The Ancient Grudge. Among them were the teaching of American school text-books and the revolutionary tradition handed down from father to son, the attitude of the British governing classes to the North in the Civil War—an attitude not adopted by the Spectator • ..—and the Irish question. In the last twenty years a great change has taken place in American feeling. - There are still many Americans who are so immersed in their own concerns that they have little time for external matters, but thinking America is undoubtedly much more friendly to us than it was twenty years ago.

Let us turn to the British attitude towards America. Among those who are not personally acquainted with America it is generally critical. America may be re- spected or feared to-day, but she was never less popular. An inversion has taken place in the relations of the two peoples ; yesterday it was the American who withheld his friendship, to-day it is the Englishman who is beginning to do so. What are the reasons for this anti-American complex ? Some of them are as follows : the average' Englishman has never fully understood the difficulties of -America- in coming into the War ; nor America's attude towards debt repayment ; nor America's prosperity while Great Britain has been suffering from unemployment and other ills ; nor Prohibition, which has been a good deal misrepresented by the British Press. Other causes are our loss of the undisputed commercial leadership of the world, the predominance of the American film, and the natural feelings of a debtor towards his creditor.

Recently Mr. Hoover, the American Secretary of Commerce, attacked the control by foreign Governments of raw materials, as for instance in the Stevenson Scheme which was adopted when the rubber industry was in extremis three years ago ; and he deplored the fact that the United States had to'.pay more for her rubber supplies. Mr. Hoover's remarks failed to arouse his countrymen, however, because, for the most part, they felt that America had no more grievance than Great Britain had had on former occasions, when the prices of American tobacco, wheat and cotton were raised.

This episode, so full of friction-making possibilities, has had no effect on British-American relations, but we may learn a lesson from it. America is the greatest purchaser of raw materials in the world, and year by year as her population grows- her powers of consumption increase. The British Empire within its vast undeveloped territories can produce practically all the raw materials she requires. The British Empire requires large' sums of money for development. It is, therefore, obviously to our advantage that American capital should help to develop our latent resources instead of being diverted to our rivals. There is no doubt that on a long view Anglo-American economic co-operation is to the benefit of both sides. Yet, just because a certain number of Englishmen have an anti-American complex, is this a reason for saying to America, "We propose to bang, bolt and bar the door" as far as American commercial co-operation in developing the British Empire is concerned ? Are "Ourselves alone" and "No American need apply" to be our mottoes ? Fortunately the Dominions will not wait on the pleasure of Lombard Street. There is already much American money in the British Empire. It has flowed freely into Canada ; Australia has raised a loan in Wall Street. All we mean is that in the interests of both nations the process ought to be accelerated, not checked. American money would be better applied in the British Empire than in Brazil, or the Argentine or Liberia.

In recent years the axle tree of our diplomacy has been co-operation with the United States. Our statesmen have recognized that without British-American friendship the outlook for the world would be a dark one. The lessons of the Washington Naval Conference should not be lost upon us ; they showed us what the British and American Commonwealths, acting in unison, could achieve. In recent years a great expansion in British- American commerce has taken place, and unless some unforeseen catastrophe occurs, its growth during the next fifty years will be stupendous, for the two greatest trading nations must inevitably do more and more business together. If, then, American capitalists are willing to invest their money in Great or Greater Britain, let us welcome them, for their dollars will provide more employment and an improved standard of living for our people.

To sum up. Englishmen who have personal acquaint- ance with America do not hate America ; they come back from their visits enthusiastic for the cause of English- speaking co-operation. Unfortunately the majority of our people can never visit America. To them we would say, "Let us forget our grievances, fancied or real, and let us explore the possibilities of British-American co-operation in every field. The more business we do together the better we shall get to know each other, the more prosperous we shall both become, and the sooner will come the day when all the mists of mis- understanding between the subjects of King Shakespeare, to borrow Carlyle's phrase, will be dispelled."