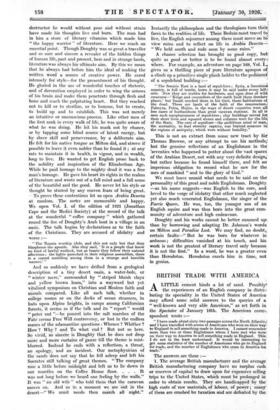 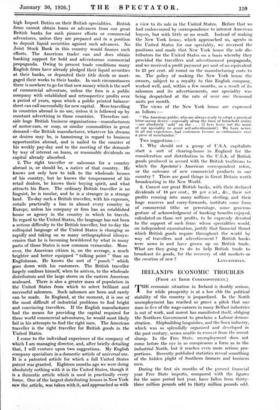 ALITTLE cement binds a lot of sand. Possibly) the experiences of an English company in distri•-; buting its speciality in the United States of America may afford some, solid answers . to the queries of a "well-known and very able American," as set forth ia the Spectator of January 16th. The American corre7) spondent wrote :7-- " I have made about sixty-two passages across the North Atlantic,1 and I have travelled with scores of Americans who were on their wayi to England to sell somethingmadi3 in America. I cannot rememberf more than two or three Englishmen whom I have met who were! on their way to America to sell something made in England. This I do not in the least understand. It would be- interesting to get some statistics of the number of Americans who go to England; for trade, and the number of Englishmen who come to America ffm

The answers are these :- 1. The average British manufacturer and the average British manufacturing company have no Surplus cash. or reserves of capital to draw upon for expensive selling trips to the United States, which must be prolonged in order to obtain results. They are handicapped by the high costs of raw materials, of labour, of power ; many' of them are -crushed by taxation Mid are defeated by the high Import Duties on their British specialities. British firms cannot obtain -loans or advances from our great British banks for such pioneer efforts or commercial adventures, unless they are prepared and in a _position to deposit liquid securities against such advances. No Joint Stock Bank in this country would finance such efforts. The American trader can and does' obtain banking support for bold and adventurous commercial propaganda. Owing to present trade conditions many English firms have already pledged their liquid securities at their banks, or deposited their title deeds or mort- gaged their works to their banks. In such circumstances there is nowhere to go for that new money which is the seed of commercial adventure, unless the firm is a public company with established and retrospective profits over a period of years, upon which a public printed balance- sheet can call successfully for new capital. Mere travelling in countries abroad is no use, unless it is followed up by constant advertising in those countries. Therefore out- side huge British business organizations—manufacturers of motor-cars, or soap, or similar commodities in great demand—the British manufacturer, whatever his dreams or desires may be, is hamstrung . in regard to business opportunities- abroad, and is nailed to the counter of his weekly pay-day and to the meeting of the demands by way of interest on loans, or reasonable dividends on capital already absorbed.

2. The right traveller or salesman for a country abroad is, or should be, a native of that country. He knows not only how to talk to the wholesale houses of his country, but he knows the temperament of his retail dealers, he knows their buying spirit, and what attracts his Race. The ordinary British traveller is no linguist, he is insular, and he is a stranger in a strange land. To-day such a British traveller, with his expenses, entails practically a loss in almost every country in Europe, unless his company or firm has an established house or agency in the country in which he travels. In regard to the United States, the language has not been a serious difficulty to the British traveller, but to-day the colloquial language of the United States is changing so rapidly and taking on so many orthographical idiosyn- crasies that he is becoming bewildered by what in many parts of those States is now common vernacular. More over, the American citizen is, on the average, a much brighter and better equipped "talking point" than an Englishman. He knows the sort of " punch " which goes down with his customers. The British traveller largely confines himself, when he arrives, to the wholesale distributors and the large stores on the eastern American seaboard. There is also a greater mass of population in the United States from which to select brilliant and successful salesmen. Such salesmen are born and rarely can be made. In England, at the moment, it is one of the most difficult of industrial problems to find bright and convincing travellers. If the English manufacturer had the means for providing the capital required for these world Commercial adventures,_ he would most likely fail in his attempts to find the right men. The American traveller is the right traveller for British goods in the 'United States.

I come to the individual experience of the company of Which I am managing director, and, after briefly detailing that, I will venture upon two suggestions. My English company specializes in a domestic article of universal use.•It is a patented article for which a full United States patent was granted. Eighteen months ago we were doing absolutely nothing with it in the United States, though it is a domestic article which is used in practically. every home. One of the largest distributing houses in New York saw the article, was taken with it, and approached us with

a view to its sale in the United States. Before that we had endeavoured by correspondence to interest American buyers, but with little or no result. Instead of making the New York house, which approached us, agents in the United States for our speciality, we reversed the positions and made that New York house the sole dis- tributors for the United States on a basis whereby they provided the travellers and advertisement propaganda, and we received a profit payment per unit of an equivalent to 25 per cent, all round on the manufacturing costs to us. The policy of making the New York house the owners, subject to a royalty to this English company, worked well, and, within a few months, as a result of its salesmen and its advertisements, our speciality was being despatched at the rate of over one thousand units per month.

The views of the New York house are expressed as follows :— "The American public, who are always ready to adopt a practical labor-saving device—especially along the lines of household utility —are absolutely 'sold ' on the . . . II hero leave out. tho name of our speciality to avoid self-advertisementl. We have never, in all our experience, had customers become so enthusiastic over a piece of merchandise."

Two suggestions :- 1. Why should not a group of U.S.A. Capitalists start a sort of clearing-house in England for the consideration and distribution in the U.S.A. of British goods produced in accord with the British traditions to which the Spectator's American correspondent refers, or the outcome of new commercial products in our country ? There are good things in Great Britain worth broadcasting in the New World.

2. Cannot our great British banks, with their declared dividends of 18 per cent., 20 per cmt., &e., their net profits running into many millions sterling, and their huge reserves and carry-forwards, institute some form of commercial tithe or percentage, some generous gesture of acknowledgment of banking benefits enjoyed, calculated on those net profits, to be expressly devoted to the support of such firms whose specialities would, on independent examination, justify that financial thrust which British goods require throughout the world by way of travellers and advertisement ? British banks were sown in and have grown up on British trade.

What are they going to do to help British trade to broadcast its goods, for the recovery of old markets or