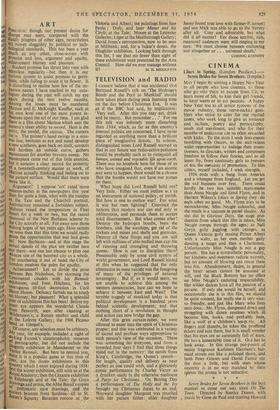 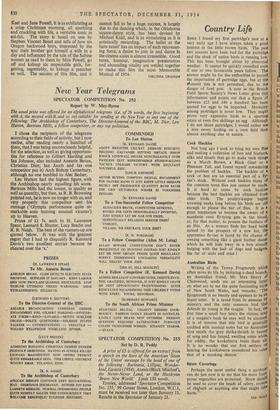 Brothers. (Empire.) MAY I begin by wishing a Happy New Year to all people who love cinemas, to those who go into them to escape from Ve, to learn more of life, to kiss their girl friends, to keep warm or to eat peanuts. A happy New Year too to all scnior tycoons of the movie industry, those nerve-racked gam- biers who strive to cater for our myriad tastes, who work long to give us romance and realism, poetry and pornography, mush and merriment, and who for their months of endeavour are so often rewarded with kicks. To the stars I wish firmaments twinkling with Oscars, to the techaicians wider opportunities to indulge their inven- tiveness, to directors, writers and composers freedom to follow their fancies, and to all lesser fry, from continuity girls to brewers of tea, the certainty of promotion. To film critics, myself included, 1 wish strength.

1954 ends with a bang from America and a whimper from England. Let me get the sad business over first. There could hardly be two less suitable team-mates than Anna Neagle and Errol Flynn, and in Herbert Wilcox's Lilacs in Spring they do each other no good. Mr. Flynn tries to be monochrome, Miss Neagle colourful, and the result is a vacuum in pastel shades. As she did in Glorious Days, the stage pro- duction from which this film is taken, Miss Neagle romps through the ages; as Nell Gwyn gaily juggling with oranges, as Queen Victoria gaily teasing Prince Albert with a waltz, as her own mother gaily dancing a tango and then a Charleston. Unfortunately Miss Neagle is not a gay person. She has a sympathetic personality, her kindness and sweetness radiate warmth, but no amount of blowing can rouse these into fire. Abandonment, desire, in general the baser senses cannot be assumed at will, and the Black Bottom has no effect on Miss Neagle's enduring respectability.' Her wilder dances have all the passion of a pavane. If only she would be herself, and occasionally she is in this film, we should be quite content, for really she is very nice: so friendly, and just like Mary who lives next door. Mr. Flynn, dampened down and struggling with dance routines which ill become him, looks, and probably feels, like a wolf at a children's tea-p„ rty. All fingers and thumbs, he takes the proffered éclairs and eats them, but it is small wonder that his eyes are so constantly full of tears. He has a lamentable time of it. Oi.e has to look away. In this strange pot-pourri of musty fragrance Kathleen Harrison's bar- maid stands out like a polished thorn, and both Peter Graves and David Farrar stir the dust a little, but with stars whose sincerity is in no way matched by their yents the aroma is not seductive.

Seven Brides for Seven Brothers is the best musical to come our way since On The Town. Directed by Stanley Donen, with , music by Gene de Paul and starring Howard Keel and Jane Powell, it is as exhilarating as a crisp Christmas morning, all sparkling and crackling with life, a veritable tonic in sol-fah, The story is based on one by Stephen Vincent Benet and tells of how six Oregon bacicwood boys, impressed by the way their brother got himself a wife in a day and influenced by the tale of the Sabine women as read to them by Miss Powell, go off and kidnap six respectable girls, for- getting, regrettably, to kidnap a preacher as well. The success of this film, and it cannot fail to be a huge success, is largely due to the dancing which, in the Oklahoma square-dance style, has been devised by Michael Kidd, and is as stimulating as it is artistically rewarding. The ballet at the barn raisin' has an impact of such rejuvenat- ing force, a desire to join in and dance in the cinema aisles is almost irresistible. Good tunes, humour, imaginative presentation and abounding vitality are welded together to make this film the most Memorable Musical of 1954.