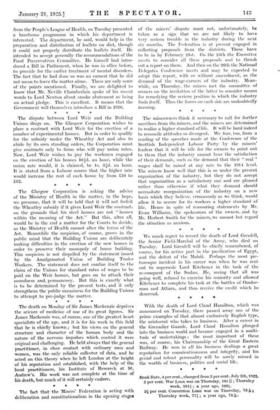 We much regret to record the death of Lord Grenfell,

the Senior Field-Marshal of the Army, who died on Tuesday. Lord Grenfell will be chiefly remembered, of course, for his active part in the pacification of Egypt, and the defeat of the Mandi. Perhaps the most pic- turesque incident in his career was when he was sent out to supersede Lord Kitchener in the task of the re-conquest of the Sudan. He, seeing that all was going well, refused to exercise his seniority and allowed Kitchener to complete his task at the battles of Omdur- man and Atbara, and thus receive the credit which he deserved.