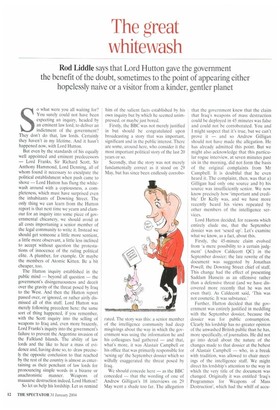 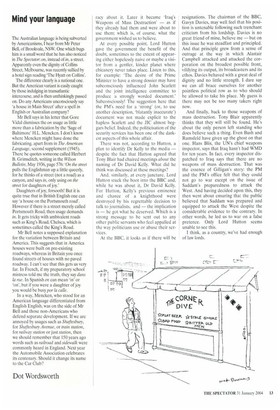 Rod Liddle says that Lord Hutton gave the government the benefit of the doubt, sometimes to the point of appearing either hopelessly naive or a visitor from a kinder, gentler planet So what were you all waiting for? You surely could not have been expecting an inquiry, headed by an eminent law lord, to deliver an indictment of the government? They don't do that, law lords. Certainly they haven't in my lifetime. And it hasn't happened now, with Lord Hutton.

But even by the standards of his equally well appointed and eminent predecessors — Lord Franks, Sir Richard Scott, Sir Anthony Hammond, Lord Denning, all of whom found it necessary to exculpate the political establishment when push came to shove — Lord Hutton has flung the whitewash around with a copiousness, a completeness, which must have surprised even the inhabitants of Downing Street. The only thing we can learn from the Hutton report is that next time we yearn and clamour for an inquiry into some piece of governmental chicanery, we should avoid at all costs importuning a senior member of the legal community to write it. Instead we should get someone a little more sentient, a little more observant, a little less inclined to accept without question the protestations of innocence of the ruling political elite. A plumber, for example. Or maybe the members of Atomic Kitten. Be a bit cheaper, too.

The Hutton inquiry established in the public mind — beyond all question — the government's disingenuousness and deceit over the gravity of the threat posed by Iraq to the West. And then the Hutton report passed over, or ignored, or rather airily dismissed all of this stuff. Lord Hutton was merely following precedent here: the same sort of thing happened, if you remember, with the Scott inquiry into the selling of weapons to Iraq and, even more brazenly, Lord Franks's inquiry into the government's failure to prevent the Argentine invasion of the Falkland Islands. The ability of law lords and the like to hear a mass of evidence and, having done so, to draw precisely the opposite conclusion to that reached by the rest of the country is almost as entertaining as their penchant of law lords for pronouncing simple words in a bizarre or anachronistic manner. Weapons of maaaarse destruction indeed, Lord Hutton?

So let us help his lordship. Let us remind him of the salient facts established by his own inquiry but by which he seemed unimpressed, or maybe just bored.

Firstly, the BBC was not merely justified in but should be congratulated upon broadcasting a story that was important, significant and in the public interest. There are some, around here, who consider it the most important political story of the last 20 years or so.

Secondly, that the story was not merely fundamentally correct as it stood on 29 May, but has since been endlessly corrobo rated. The story was this: a senior member of the intelligence community had deep misgivings about the way in which the government was using the information he and his colleagues had gathered — and that, what's more, it was Alastair Campbell or his office that was primarily responsible for 'sexing up' the September dossier which so wilfully exaggerated the threat posed by Iraq.

We should concede here — as the BBC conceded — that the wording of one of Andrew Gilligan's 18 interviews on 29 May went a shade too far. The allegation that the government knew that the claim that Iraq's weapons of mass destruction could be deployed in 45 minutes was false and could not be corroborated. You and I might suspect that it's true, but we can't prove it — and so Andrew Gilligan should not have made the allegation. He has already admitted this point. But we might also acknowledge that this particular rogue interview, at seven minutes past six in the morning, did not form the basis of the original complaints from Mr Campbell. It is doubtful that he even heard it. The complaint, then, was that a) Gilligan had only one source and b) his source was insufficiently senior. We now know precisely how 'important and credible' Dr Kelly was, and we have more recently heard his views repeated by other members of the intelligence services.

Lord Hutton decided, for reasons which entirely elude me, that the September dossier was not 'sexed up'. Let's examine what we know, as a fact, about this.

Firstly, the 45-minute claim evolved from 'a mere possibility to a certain judgment' (Andrew Caldecott QC) in the September dossier; the late rewrite of the document was suggested by Jonathan Powell, the Downing Street chief of staff. This change had the effect of presenting Saddam Hussein as an offensive rather than a defensive threat (and we have discovered more recently that he was not even that). As Caldecott said, 'This was not cosmetic. It was substance.'

Further, Hutton decided that the government was entirely justified in meddling with the September dossier, because the dossier was for public consumption. Clearly his lordship has no greater opinion of the unwashed British public than he has, more specifically, of journalists. He did not go into detail about the nature of the changes made to that dossier at the behest of Alastair Campbell — who, in a break with tradition, was allowed to chair meetings of the intelligence staff. We might direct his lordship's attention to the way in which the very title of the document was changed. Originally it was entitled 'Iraq's Programmes for Weapons of Mass Destruction', which had the whiff of accu racy about it. Later it became 'Iraq's Weapons of Mass Destruction' — as if they already had them and were about to use them; which is, of course, what the government wished us to believe.

At every possible point, Lord Hutton gave the government the benefit of the doubt, sometimes to the extent of appearing either hopelessly naive or maybe a visitor from a gentler, kinder planet where chicanery never takes place. Listen to this, for example: 'The desire of the Prime Minister to have a strong dossier may have subconsciously influenced John Scarlett and the joint intelligence committee to produce a strongly worded document.' Subconsciously! The suggestion here that the PM's need for a 'strong' (or, to use another description, 'blatantly inaccurate') document was not made explicit to the hapless Scarlett and the JIC almost beggars belief. Indeed, the politicisation of the security services has been one of the darkest aspects of this whole affair.

There was not, according to Hutton, a plan to identify Dr Kelly to the media — despite the fact that Hutton agreed that Tony Blair had chaired meetings about the naming of Dr David Kelly. What did he think was discussed at these meetings?

And, similarly, at every juncture, Lord Hutton stuck the boot into the BBC and, while he was about it, Dr David Kelly. For Hutton, Kelly's previous eminence and chance of a knighthood were destroyed by his regrettable decision to talk to journalists. and — the implication is — he got what he deserved, Which is a strong message to be sent out to any other public servants who feel appalled at the way politicians use or abuse their services.

At the BBC, it looks as if there will be resignations. The chairman of the BBC, Gavyn Davies, may well feel that his position is untenable following such trenchant criticism from his lordship. Davies is no great friend of mine, believe me — but on this issue he was steadfast and principled. And that principle grew from a sense of outrage at the way in which Alastair Campbell attacked and attacked the corporation on the broadest possible front, vilifying its output, its broadcasters and its ethos. Davies behaved with a great deal of dignity and no little strength. I dare say we can all brace ourselves for another pointless political row as to who should be allowed to take his place. My guess is there may not be too many takers right now.

And finally, back to those weapons of mass destruction. Tony Blair apparently thinks that they will still be found. He's about the only person left standing who does believe such a thing. Even Bush and Rumsfeld have given up the ghost on that one. Hans Mix, the UN's chief weapons inspector, says that Iraq hasn't had WMD for ten years. In fact, every inspector dispatched to Iraq says that there are no weapons of mass destruction. That was the essence of Gilligan's story: the PM and the PM's office felt that they could not go to war except on the issue of Saddam's preparedness to attack the West. And having decided upon this, they then went about ensuring that the public believed that Saddam was prepared and equipped to attack the West despite the considerable evidence to the contrary. In other words, he led us to war on a false pretence. Only Lord Hutton seems unable to see this.

I think, as a country, we've had enough of law lords.