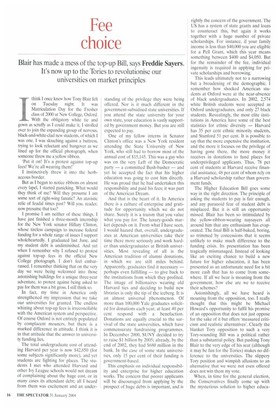 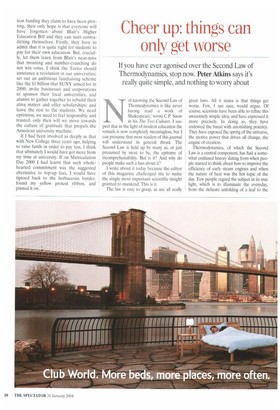 Blair has made a mess of the top-up Bill, says Freddie Sayers. It's now up to the Tories to revolutionise our universities on market principles Ithink I once knew how Tony Blair felt on Tuesday night. It was Matriculation Day for the Fresher class of 2000 at New College, Oxford. With the obligatory white tie and gown as scruffy as I could make it, I strolled over to join the expanding group of nervous, black-and-white-clad new students, of which I was one. I was slouching against a buttress, trying to look reluctant and hungover as we lined up for the official photograph, when someone threw me a yellow ribbon.

Tut it on! It's a protest against top-up fees! We're all wearing them!'

I instinctively threw it into the herbaceous border.

But as I began to notice ribbons on almost every lapel, I started panicking. What would they think of me? Will they presume I am some sort of right-wing fanatic? An atavistic relic of feudal times past? Will you, reader, now presume that too?

I promise I am neither of these things. I have just finished a three-month internship for the New York senator Hillary Clinton, whose tireless campaign to increase federal funding for a whole range of issues I support wholeheartedly. I graduated last June, and my student debt is undiminished. And yet when I remember why I refused to protest against top-up fees in the official New College photograph, I don't feel embarrassed. I remember thinking that on the very day we were being welcomed into those astonishing buildings for a unique three-year adventure, to protest against being asked to pay for them was a bit gross. I still think so.

In fact, my time in America only strengthened my impression that we take our universities for granted. The endless whining about top-up fees is irreconcilable with the American system and perspective. Of course Oxford is not entirely populated by complacent moaners, but there is a marked difference in attitude. I think it is in that attitude that the answer to university funding lies.

The total undergraduate cost of attending Harvard per year is now $42,850 (for some subjects significantly more), and yet students are fighting for places. The students I met who attended Harvard and other Ivy League schools would not dream of complaining about the huge cost, or in many cases its attendant debt; all I heard from them was excitement and an under standing of the privilege they were being offered. Nor is it much different in the government-subsidised state universities. If you attend the state university for your own state, your education is vastly supported by government money. But you are still expected to pay.

One of my fellow interns in Senator Clinton's office was a New York resident attending the State University of New York, who still had to borrow most of the annual cost of $15,145. This was a guy who was on the very Left of the Democratic party — a committed Bush-basher — and yet he accepted the fact that his higher education was going to cost him directly. He was proud that he had undertaken this responsibility and paid his fees; it was part of the American Dream.

And that is the heart of it. In America there is a culture of enterprise and gratitude for opportunity which we do not share. Surely it is a truism that you value what you pay for. The luxury-goods market depends on it. From what I have seen, I would hazard that, overall, undergraduates at American universities take their time there more seriously and work harder than undergraduates at British universities. Most revealing of all is the American tradition of alumni donations, in which we are still miles behind. Apparently, graduates find it necessary — perhaps even fulfilling — to give back to the institutions from which they profited. The image of billionaires wearing old Harvard ties and deciding to build new libraries is only the tip of the iceberg. It is an almost universal phenomenon. Of more than 100,000 Yale graduates solicited for donations each year, at least 40 per cent respond with a benefaction. Donations are equally crucial to the survival of the state universities, which have commensurate fundraising programmes. In December 2000, SUNY decided to try to raise $1 billion by 2005; already, by the end of 2002, they had $680 million in the bank. In the case of some state universities, only 15 per cent of their funding is government-based.

This emphasis on individual responsibility and enterprise for higher education works. The concern that poorer applicants will be discouraged from applying by the prospect of huge debts is important, and is rightly the concern of the government. The US has a system of state grants and loans to counteract this, but again it works together with a huge number of private scholarships. For instance, if your family income is less than $40,000 you are eligible for a Pell Grant, which this year means something between $400 and $4,050. But for the remainder of the fee, individual ingenuity is required in applying for private scholarships and borrowing.

This leads ultimately not to a narrowing but a broadening of the demographic. I remember how shocked American students at Oxford were at the near-absence of black undergraduates. In 2002, 2,574 white British students were accepted as Oxford undergraduates, and only 27 black students. Revealingly, the most elite institutions in America have some of the best statistics for ethnic diversity — Harvard has 35 per cent ethnic minority students, and Stanford 51 per cent. It is possible to say that the more expensive the institution, and the more it focuses on the privilege of having gone there, the more money it receives in donations to fund places for underprivileged applicants. Thus, 78 per cent of students at Harvard receive financial assistance, 48 per cent of whom rely on a Harvard scholarship rather than government funds.

The Higher Education Bill goes some way in the right direction. The principle of asking the students to pay is fair enough, and any paranoid fear of student debt is misplaced. But it is still an opportunity missed. Blair has been so intimidated by the yellow-ribbon-wearing naysayers all around him that any enthusiasm has evaporated. The final Bill is half-baked, boring, so trimmed by concessions that it seems unlikely to make much difference to the funding crisis. Its presentation has been tragically mismanaged. Instead of looking like an exciting chance to build a new future for higher education, it has been presented as an unfortunate need for a bit more cash that has to come from somewhere. If all we hear is moaning from the government, how else are we to receive their schemes?

Astonishingly, all we have heard is moaning from the opposition, too. I really thought that this might be Michael Howard's opportunity to fulfil his promise of an opposition that does not just oppose for the sake of it but offers 'measured criticism and realistic alternatives'. Clearly the blanket Tory opposition to such a very Tory-sounding Bill was a political rather than a substantial policy. But pushing Tony Blair to the very edge of his seat (although it may be fun for the Tories) makes no difference to the universities. The slippery Tory position and wimpish allusions to an alternative that we were not even offered does not win them my vote.

When, in time for the general election, the Conservatives finally come up with the mysterious solution to higher educa tion funding they claim to have been plotting, their only hope is that everyone will have forgotten about Blair's Higher Education Bill and they can start contradicting themselves. Firstly, they have to admit that it is quite right for students to pay for their own education. But, crucially, let them learn from Blair's near-miss that moaning and number-crunching do not win votes. I think the Tories should announce a revolution in our universities; set out an ambitious fundraising scheme like the $1 billion that SUNY aimed for in 2000; invite businesses and corporations to sponsor their local universities, and alumni to gather together to rebuild their alma maters and offer scholarships; and leave the rest to the students. We need optimism, we need to feel responsible and trusted; only then will we move towards the culture of gratitude that propels the American university machine.

If I had been involved as deeply as that with New College three years ago, helping to raise funds in order to pay less, I think that ultimately I would have got more from my time at university. If on Matriculation Day 2000 I had learnt that such wholehearted commitment was the suggested alternative to top-up fees, I would have tiptoed back to the herbaceous border, found my yellow protest ribbon, and pinned it on.