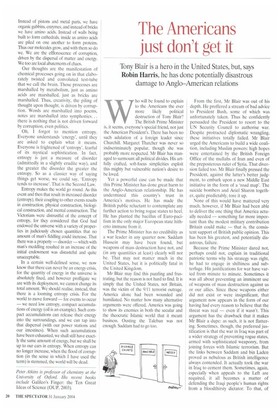 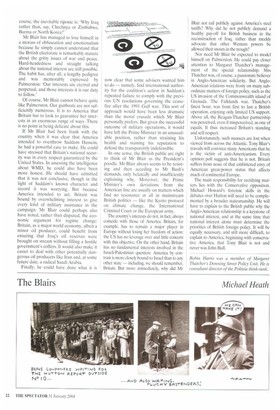 The Americans just don't get it

Tony Blair is a hero in the United States, but, says Robin Harris, he has done potentially disastrous damage to Anglo—American relations Ivho will be found to explain to the Americans the ever

more likely political destruction of Tony Blair? The British Prime Minister is, it seems, everyone's special friend, not just the American President's. There has been no such adulation of a foreign leader since Churchill. Margaret Thatcher was never so indiscriminately popular, though she was probably more respected. Mr Blair has managed to surmount all political divides. His artfully crafted, soft-focus simplicities exploit this mighty but vulnerable nation's desire to be loved.

Yet a powerful case can be made that this Prime Minister has done great harm to the Anglo-American relationship. He has undermined this country's trust in America's motives. He has made the British public reluctant to contemplate any further action to bring rogue states to heel. He has planted the bacillus of Euro-pacifism in the only major European state hitherto immune from it.

The Prime Minister has no credibility as a war leader in any quarter now. Saddam Hussein may have been found, but weapons of mass destruction have not, and (in any quantities at least) clearly will not be. That may not matter much in the United States, but it is politically fatal in the United Kingdom.

Mr Blair may find this puzzling and frustrating, but the reason is not hard to find. It is simply that the United States, not Britain, was the victim of the 9/11 terrorist outrage. America alone had been wounded and humiliated. No matter how many alternative arguments were offered, America was going to show its enemies in both the secular and the theocratic Islamic world that it meant business. Ousting the Taleban was not enough. Saddam had to go too.

From the first, Mr Blair was out of his depth. He proffered a stream of bad advice to President Bush, some of which was unfortunately taken. Thus he confidently persuaded the President to resort to the UN Security Council to authorise war. Despite protracted diplomatic wrangling, these initiatives totally failed. Mr Blair urged the Americans to build a wide coalition, including Muslim powers: high hopes were entertained by the British Foreign Office of the mullahs of Iran and even of the preposterous ruler of Syria. That diversion failed too. Mr Blair finally pressed the President, against the latter's better judgment, to embark upon a new Middle East initiative in the form of a 'road map'. The suicide bombers and Ariel Sharon together, quite predictably, tore it up.

None of this would have mattered very much, however, if Mr Blair had been able to deliver the one thing that America actually needed — something far more important than the modest military contribution Britain could make — that is, the consistent support of British public opinion. This has been his greatest, and potentially disastrous, failure.

Because the Prime Minister dared not, perhaps could not, explain in traditional patriotic terms why his strategy was right, he had to engage in shiftiness and subterfuge. His justifications for war have varied from minute to minute. Sometimes it was all about preventing an imminent use of weapons of mass destruction against us or our allies. Since these weapons either did not exist or were insignificant, that argument now appears in the form of our having had every reason to believe that the threat was real — even if it wasn't. This argument has the drawback that it makes Mr Blair a dupe: as such, it is not flattering. Sometimes, though, the preferred justification is that the war in Iraq was part of a wider strategy of preventing rogue states, armed with sophisticated weaponry, from joining forces with Islamic terrorism. But the links between Saddam and bin Laden proved as nebulous as British intelligence always contended. It actually took the war in Iraq to cement them. Sometimes, again, especially when appeals to the Left are required, it all becomes a matter of defending the Iraqi people's human rights from a bloodthirsty dictator. To that, of course, the inevitable riposte is: 'Why Iraq rather than, say, Chechnya or Zimbabwe. Burma or North Korea?'

Mr Blair has managed to lose himself in a morass of obfuscation and emotionalism because he simply cannot understand that the British electorate is remarkably mature about the gritty issues of war and peace. Hard-headedness and straight talking about the national interest are still possible. The habit has, after all, a lengthy pedigree and was memorably expressed by Palmerston: 'Our interests are eternal and perpetual, and those interests it is our duty to follow.'

Of course, Mr Blair cannot behave quite like Palmerston. Our gunboats are not sufficiently numerous. It is to America that Britain has to look to guarantee her interests in an enormous range of ways. There is no point in being delicate about this.

If Mr Blair had been frank with the country when it was clear that America intended to overthrow Saddam Hussein, he had a powerful case to make. He could have stressed that Britain's national security was in every respect guaranteed by the United States. In assessing the intelligence about WMD, he could also have been more honest. He should have admitted that it was not conclusive, though in the light of Saddam's known character and record it was worrying. But because America intended to act, Britain was bound by overwhelming interest to give every kind of military assistance in the campaign. Mr Blair could perhaps also have noted, rather than disputed, the economic argument for regime change: Britain, as a major world economy, albeit a minor oil producer, could benefit from ensuring that Iraq's oil reserves were brought on stream without filling a hostile government's coffers. It would also make it easier to deal with other potentially dangerous oil producers like Iran and, at some future date, a radical Saudi Arabia.

Finally, he could have done what it is now clear that some advisers wanted him to do — namely. find international authority for the coalition's action in Saddam's repeated failure to comply with the previous UN resolutions governing the ceasefire after the 1991 Gulf war. This sort of approach would have been less dramatic than the moral crusade which Mr Blair personally prefers. But given the successful outcome of military operations, it would have left the Prime Minister in an unassailable position, rather than straining his health and staining his reputation to defend the transparently indefensible.

In one sense, the British public are right to think of Mr Blair as the President's poodle. Mr Blair always seems to be resisting and then acceding to Mr Bush's demands, only belatedly and insufficiently explaining why. Moreover, the Prime Minister's own deviations from the American line are usually on matters which find no resonance at all in mainstream British politics — like the Kyoto protocol on climate change, the International Criminal Court or the European army.

The country's interests do not, in fact, always coincide with those of America. Britain, for example, has to remain a major player in Europe without losing her freedom of action: the US has no leverage over and little concern with this objective. On the other hand, Britain has no fundamental interests involved in the Israeli-Palestinian question: America by contrast is more closely bound to Israel than to any other state — including, we should remember, Britain. But more immediately, why did Mr Blair not rail publicly against America's steel tariffs? Why did he not publicly demand a healthy pay-off for British business in the reconstruction of Iraq, rather than meekly advocate that other Western powers be allowed their snouts in the trough?

Nor need Mr Blair be expected to model himself on Palmerston. He could pay closer attention to Margaret Thatcher's management of the special relationship. Mrs Thatcher was, of course, a passionate believer in Anglo-American solidarity. But AngloAmerican relations were frosty on many subordinate matters of foreign policy, such as the US invasion of the Commonwealth island of Grenada. The Falklands war. 'Thatcher's finest hour, was from first to last a British operation, enjoying only limited US support. Above all, the Reagan-Thatcher partnership was perceived, even if misperceived, as one of equals. It thus increased Britain's standing and self-respect.

Unfortunately, such nuances are lost when viewed from across the Atlantic. Tony Blair's travails will convince many Americans that he is the victim of anti-Americanism. Every opinion poll suggests that he is not. Britain suffers from none of that embittered envy of American great-power status that affects much of continental Europe.

The main responsibility for rectifying matters lies with the Conservative opposition. Michael Howard's forensic skills in the debates over Hutton will need to be complemented by a broader statesmanship. He will have to explain to the British public why the Anglo-American relationship is a keystone of national interest, and at the same time that national interest alone must determine the priorities of British foreign policy. It will be equally necessary, and still more difficult, to explain to America, beginning with conservative America, that Tony Blair is not and never was John Bull.

Robin Harris was a member of Margaret Thatcher's Downing Street Policy Unit. He is consultant director of the Politeia think-tank.