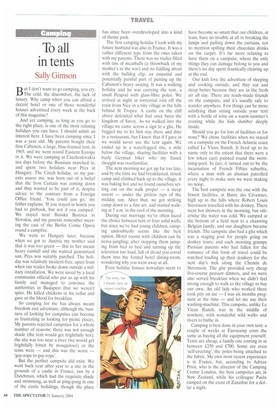 To all in tents

But I don't want to go camping, you cry. 1-.1 The cold, the discomfort, the lack of luxury. Why camp when you can afford a decent hotel or one of those wonderful houses advertised every week at the back of this magazine?

And yet camping, as long as you go to the right place, is one of the most relaxing holidays you can have. I should admit an interest here. I have been camping since I was a year old. My parents bought their first Cabanon, a large, blue-framed tent, in 1965, and we went round Eastern Europe in it. We were camping in Czechoslovakia ten days before the Russians marched in, and spent two holidays near Pecs in Hungary. The Czech holiday, so my parents assure me, was born out of a belief that the Iron Curtain was coming down and they wanted to be part of it, despite advice to the contrary from a Foreign Office friend. 'You could just go,' my father explains. 'If you stayed in hotels you had to prebook, but not if you camped.' We stayed near Banska Bystrica in Slovakia, and my parents remember meeting the cast of the Berlin Comic Opera round a campfire.

We went to Hungary later, because when we got to Austria my mother said that it was too green — this to her meant heavy rainfall and she wanted guaranteed sun. Pecs was suitably parched. The holiday was relatively incident-free, apart from when our trailer broke down outside a military installation. We were saved by a local communist official who put us up with his family and managed to convince the authorities in Budapest that we weren't spies. He killed chickens in his cellar and gave us the blood for breakfast.

So camping for me has always meant freedom and adventure, although the business of looking for campsites can become as frustrating as looking for picnic places. My parents rejected campsites for a whole number of reasons: there was not enough shade (the tent would get frightfully hot), the site was too near a river (we would get frightfully bitten by mosquitoes) or the tents were — and this was the worst — 'guy-rope to guy-rope'.

But the perfect campsite did exist. We went back year after year to a site in the grounds of a castle in France, run by a Dutchman, which had the requisite shade and swimming, as well as ping-pong in one of the castle buildings, though the place has since been overdeveloped into a kind of theme park.

The first camping holiday I took with my future husband was also in France. It was a rather different type from the ones taken with my parents. There was no trailer filled with tins of meatballs (a throwback of my mother's to the war) and no fiddling about with the bulldog clip, an essential and potentially painful part of putting up the Cabanon's heavy awning. It was a walking holiday and he was carrying the tent, a small Peapod with glass-fibre poles. We arrived at night in torrential rain off the train from Nice in a tiny village in the hills behind St Tropez. A castle on the cliff above defended what had once been the kingdom of Savoy. As we walked into the village we came across a sign to a gite. He begged me to let him stay there and dine in a restaurant, but I knew that if I gave in we would never use the tent again. We ended up in a waterlogged site, a mile below the village, sharing facilities with a burly German biker who my fiancé thought was overfamiliar.

The next morning we got up far too late, and by the time we had breakfasted, struck camp and climbed back up to the village, it was baking hot and we found ourselves setting out on the walk proper — a steep ascent — under the pitiless rays of the midday sun. After that, we got striking camp down to a fine art, and started walking at 5 a.m. in the cool of the morning.

During our marriage we've often faced the choice between tent or four solid walls, but since we've had young children, camping undoubtedly seems like the best option. Hotel rooms with children can be nerve-jangling; after stopping them jumping from bed to bed and turning up the television too loud, full of dread you corral them into the formal hotel dining-room, wondering why you went away at all.

Even holiday houses nowadays seem to

KIT-I:sorry, but I already have an orgasm machine

have become so smart that our children, at least, have no trouble at all in breaking the lamps and pulling down the curtains, not to mention spilling their chocolate drinks on the carpet. It's far more relaxing to have them on a campsite, where the only things they can damage belong to you and there's no day spent frantically clearing up at the end.

Our kids love the adventure of sleeping and cooking outside, and they eat and sleep better because they are in the fresh air all day. There are ready-made friends on the campsite, and it's usually safe to wander anywhere. Few things can be more satisfying than sitting outside your tent with a bottle of wine on a warm summer's evening while the kids slumber deeply inside.

Should you go for lots of facilities or for none? We chose facilities when we stayed on a campsite on the French Atlantic coast called Le Vieux Ranch. It lived up to its name only to the extent that there were a few token cacti painted round the swimming-pool. In fact, it turned out to be the incarnation of French Fifties suburbia, where a man with an alsatian patrolled every night to make sure we were making no noiw.

The best campsite was the one with the fewest facilities, at Barre des Cevennes, high up in the hills where Robert Louis Stevenson travelled with his donkey. There were hot showers in the morning, but otherwise the water was cold. We camped at the bottom of a field next to a charming Belgian family, and our daughters became friends. The campsite also had a gite which was a staging post for people going on donkey tours; and each morning grumpy Parisian parents who had fallen for the romance of this form of travel could be watched loading up their donkeys for the next day's trek along the Chemin de Stevenson. The gite provided very cheap five-course peasant dinners, and we were also served breakfast when we didn't feel strong enough to walk to the village to buy our own. An old lady who worked there took pity on rue — I was six months pregnant at the time — and let me use their washing-machine. This campsite, unlike Le Vieux Ranch, was in the middle of nowhere, with wonderful wild walks and rivers to bathe in.

Camping is best done in your own tent: a couple of weeks at Eurocamp costs the same as buying all the equipment yourself. Tents are cheap, a family one coming in at between £250 and £700. Some are even 'self-erecting', the poles being attached to the fabric. My own most recent experience is in France, but, according to Adrian Prior, who is the director of the Camping Centre London, the best campsites are in New Zealand, while his colleague Paula camped on the coast of Zanzibar for a dollar a night.