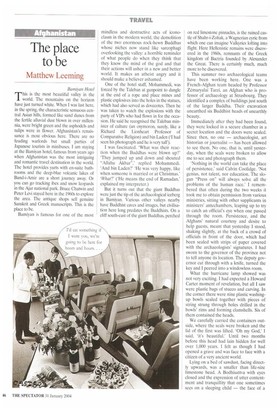 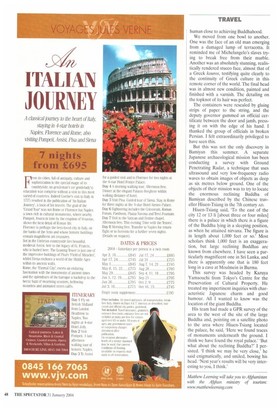 The place to be

Bamiyan Hotel This is the most beautiful valley in the 1 world. The mountains on the horizon have just turned white. When I was last here, in the spring, the characteristic sensuous central Asian hills, formed like sand dunes from the fertile alluvial dust blown in over millennia, were bright green and the asphodels and tulips were in flower. Afghanistan's renaissance is most obvious here. There are no feuding warlords but small parties of Japanese tourists in minibuses. I am staying at the Bamiyan hotel, famous from years ago when Afghanistan was the most intriguing and romantic travel destination in the world. The hotel provides yurts with en-suite bathrooms and the deep-blue volcanic lakes of Band-i-Amir are a short journey away. Or you can go tracking ibex and snow leopards in the Ajar national park. Bruce Chatwin and Peter Levi stayed here in the 1960s to explore the area. The antique shops sell genuine Sanskrit and Greek manuscripts. This is the place lobe.

Bamiyan is famous for one of the most mindless and destructive acts of iconoclasm in the modern world, the demolition of the two enormous rock-hewn Buddhas whose niches now stand like sarcophagi overlooking the valley: a horrible reminder of what people do when they think that they know the mind of the god and that their actions will usher in a new and better world. It makes an atheist angry and it should make a believer ashamed.

One of the hotel staff, Moharnmedi, was forced by the Taleban at gunpoint to dangle at the end of a rope and place mines and plastic explosives into the holes in the statues, which had also served as dovecotes. Then he was taken to watch the explosions with the party of VIPs who had flown in for the occasion. He said he recognised the Taleban minister of culture (an oxymoron, surely, like a Richard the Lionheart Professor of Comparative Religion) and bin Laden CI had seen his photograph and he is very tall').

I was fascinated. 'What was their reaction when the Buddhas were blown up?' 'They jumped up and down and shouted "Allahu Akbar"; replied Mohammedi. 'And bin Laden?' He was very happy, like when someone is married or at Christmas.' 'What?' ('He means the end of Ramadan,' explained my interpreter.) But it turns out that the giant Buddhas were just the tip of the archaeological iceberg in Bamiyan. Various other valleys nearby have Buddhist caves and images, but civilisation here long predates the Buddhists. On a cliff south-east of the giant Buddhas, perched on red limestone pinnacles, is the ruined castle of Shahr-i-Zohak, a Wagnerian eyrie from which one can imagine Valkyries lofting into flight. Here Hellenistic remains were discovered in the 1960s, remnants of the Greek kingdom of Bactria founded by Alexander the Great There is certainly much, much more to be discovered.

This summer two archaeological teams have been working here. One was a French-Afghan team headed by Professor Zemaryalai Tarzi, an Afghan who is professor of archaeology at Strasbourg. They identified a complex of buildings just south of the larger Buddha. Their excavation unearthed six Buddhist heads of unearthly beauty.

Immediately after they had been found, they were locked in a secure chamber in a secret location and the doors were sealed. Since then, no one — archaeologist, art historian or journalist — has been allowed to see them. No one, that is, until yesterday, when the seals were broken to allow me to see and photograph them.

'Nothing in the world can take the place of persistence,' said Calvin Coolidge. 'Not genius, not talent, nor education. The slogan "Press on" will always solve all the problems of the human race.' I remembered that often during the two weeks it took me to obtain permission from various ministries, sitting with other supplicants in ministers' antechambers, leaping up to try to catch an official's eye when one passed through the room. Persistence, and the Afghans' natural courtesy and desire to help guests, meant that yesterday I stood, shaking slightly, at the back of a crowd of officials in front of the door, which had been sealed with strips of paper covered with the archaeologists' signatures. I had sworn to the governor of the province not to tell anyone its location. The deputy governor cut through with a knife, turned the key and I peered into a windowless room.

What the hurricane lamp showed was not very exciting. I had expected a Howard Carter moment of revelation, but all I saw were plastic bags of stucco and carving. In the corner there were nine plastic washingup bowls sealed together with pieces of string strung through holes drilled in the bowls' rims and forming clamshells. Six of them contained the heads.

We carefully carried the containers outside, where the seals were broken and the lid of the first was lifted. 'Oh my God,' I said, 'it's beautiful.' Until two months before this head had lain hidden for well over 1,000 years. I felt as though I had opened a grave and was face to face with a citizen of a very ancient world.

Lying on a bed of sawdust, facing directly upwards, was a smaller than life-size limestone head. A Bodhisattva with eyes closed and the expression of utter contentment and tranquillity that one sometimes sees on a sleeping child — the face of a human close to achieving Buddhahood.

We moved from one bowl to another. One was the face of an old man emerging from a damaged lump of terracotta. It reminded me of Michelangelo's slaves trying to break free from their marble. Another was an absolutely stunning, realistically rendered stucco face, almost that of a Greek kouros, testifying quite clearly to the continuity of Greek culture in this remote corner of the world. The final head was in almost new condition, painted and finished with a varnish. The detailing on the topknot of its hair was perfect.

The containers were resealed by gluing strips of paper to the string, and the deputy governor gummed an official certificate between the door and jamb, pressing it on with the edge of his hand. I thanked the group of officials in broken Persian. I felt extraordinarily privileged to have seen this.

But this was not the only discovery in Bamiyan this summer. A separate Japanese archaeological mission has been conducting a survey with Ground Penetrating Radar, a technique that uses ultrasound and very low-frequency radio waves to obtain images of objects as deep as six metres below ground. One of the objects of their mission was to try to locate the enormous reclining Buddha of Bamiyan described by the Chinese traveller Hiuen-Tsiang in the 7th century AD.

Hiuen-Tsiang said, 'To the east of the city 12 or 13 Ii [about three or four miles] there is a palace in which there is a figure of the Buddha lying in a sleeping position, as when he attained nirvana. The figure is in length about 1,000 feet or so.' Most scholars think 1,000 feet is an exaggeration, but large reclining Buddhas are known from elsewhere. I have seen a particularly magnificent one in Sri Lanka, and there is apparently one that is 180 feet long in a cave at Moulmein in Burma.

This survey was headed by Kazuya Yamaouchi from Tokyo's Centre for the Preservation of Cultural Property. He treated my impertinent inquiries with characteristic Japanese charm and good humour. All I wanted to know was the location of the giant Buddha.

His team had made a GPR survey of the area to the west of the site of the large Buddha and, pointing on a satellite photo to the area where Hiuen-Tsiang located the palace, he said, 'Here we found traces of monuments underneath the ground. I think we have found the royal palace.' But what about the reclining Buddha?' I persisted. 'I think we may be very close,' he said enigmatically, and smiled, bowing his head. 'Next year's results will be very interesting to you, I think.'

Matthew Leeming will take you to Afghanistan with the Afghan minispy of tourism: www.matthewleeming.com