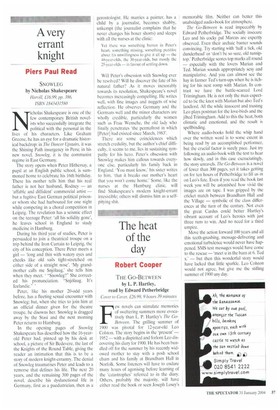 The heat of the day

THE GO-BETWEEN by L. P. Hartley, read by Edward Petherbridge Cover to Cover, £26.99, 9 hours 39 minutes Few novels can stimulate memories of sweltering summers more evocatively than L. P. Hartley's The GoBetween. The grilling summer of 1900 was pivotal for 12-year-old Leo Colston. The story begins in the 'present' — 1952— with a dispirited and forlorn Leo discovering his diary for 1900. He has been bundled off for the summer by his recently widowed mother to stay with a posh school chum and his family at Brandham Hall in Norfolk. Some listeners will have to endure many hours of agonising before learning of the 'catastrophes' referred to in the diary. Others, probably the majority, will have either read the book or seen Joseph Losey's

memorable film. Neither can better this unabridged audio-book for atmosphere.

The Go-Between is read impeccably by Edward Petherbridge. The socially insecure Leo and his cocky pal Marcus are expertly observed. Even their archaic banter sounds convincing. Try starting with 'half a tick, old dunderhead' or 'don't be so sure, old turniptop.' Petherbridge scores top marks all round — especially with the lovers Marian and Ted. Marian sounds appropriately sexy and manipulative. And you can almost see the hay in farmer Ted's turn-ups when he is itching for his next romp with Marian. In contrast we have the battle-scarred Lord Trimingham. He is not only the man expected to tie the knot with Marian but also Ted's landlord. All the while innocent and trusting Leo plays postman for the love-birds and the jilted Trimingham. Add to this the heat, both climatic and emotional, and the result is spellbinding.

Where audio-books hold the whip hand over the written word is to some extent in being read by an accomplished performer, but the crucial factor is surely pace. Just try following an audio-book with the text to hear how slowly, and in this case excruciatingly, thc story unravels. The Go-Between is a novel of fewer than 300 pages, yet it takes getting on for ten hours of Petherbridge to fill us in on Leo's fate. Even if you read the book last week you will be astonished how vivid the images are on tape. I was gripped by the cricket match between Brandham Hall and the Village — symbolic of the class differences at the turn of the century, Not even the great Cardus could better Hartley's vibrant account of Leo's heroics with just three runs to win. And no need for a third umpire.

Move the action forward 100 years and all this teeth-gnashing, message-delivering and emotional turbulence would never have happened. SMS text messages would have come to the rescue — 'meet u in the barn at 6. Ted x.' — but then this wonderful story would have lacked that little sparkle. Leo Colston would not agree, but give me the stifling summer of 1900 any day.