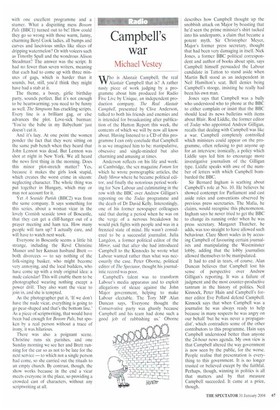 Who is Alastair Campbell, the real Alastair Campbell that is? A rather nasty piece of work judging by a programme about him produced for Radio Five Live by Unique, an independent production company. The Real Alastair Campbell, presented by Clive Anderson, talked to both his friends and enemies and is intended for broadcasting after publication of the Hutton Report this week, the contents of which we will by now all know about. Having listened to a CD of this programme I can only conclude that Campbell is as we imagined him to be: manipulative, obsessive and single-minded but also charming and amusing at times.

Anderson reflects on his life and work: at Cambridge, the sex magazine Forum for which he wrote pornographic articles, the Daily Mirror where he became political editor, and finally the notorious period working for New Labour and culminating in the row with the BBC over Andrew Gilligan's reporting on the Today programme and the death of Dr David Kelly. Interestingly, one of his former newspaper colleagues said that during a period when he was on the verge of a nervous breakdown he would pick fights with people and was in a frenzied state of mind. He wasn't considered to be a successful journalist. Julia Langdon, a former political editor of the Mirror, said that after she had introduced Campbell to the Kinnocks he wrote what Labour wanted rather than what was necessarily the case. Peter Oborne, political editor of The Spectator, thought his journalistic record was poor.

Campbell's talent was to transform Labour's media apparatus and to exploit allegations of sleaze against the John Major government, helping to make Labour electable. The Tory MP Alan Duncan says, 'Everyone thought the Conservative party was ghastly because Campbell and his team had done such a good job of rubbishing us.' Oborne describes how Campbell thought up the snobbish attack on Major by boasting that he'd seen the prime minister's shirt tucked into his underpants, a claim that became a potent myth. Sir Christopher Meyer, Major's former press secretary, thought that had been very damaging in itself. Nick Jones, a former BBC political correspondent and author of books about spin, says Campbell himself persuaded the Labour candidate in Tatton to stand aside when Martin Bell stood as an independent in Neil Hamilton's seat. Bell denies being Campbell's stooge, insisting he really had been his own man.

Jones says that Campbell was a bully who understood who to phone at the BBC to either complain or insist that the BBC should lead its news bulletins with items about Blair. Rod Liddle, the former editor of Today who appointed Andrew Gilligan, recalls that dealing with Campbell was like a war. Campbell completely controlled which ministers could appear on the programme, often refusing to put anyone up for an interview; ironically, a policy which Liddle says led him to encourage more investigative journalism of the Gilligan type. Liddle speaks with awe of the number of letters with which Campbell bombarded the BBC.

Sir Bernard Ingham is scathing about Campbell's role at No. 10. He believes he showed contempt for Parliament and cast aside rules and conventions observed by previous press secretaries. The Mafia, he claims, would recognise this phenomenon. Ingham says he never tried to get the BBC to change its running order when he was press secretary. Margaret Thatcher, he adds, was too straight to have allowed such behaviour. Clare Short wades in by accusing Campbell of favouring certain journalists and manipulating the Westminster lobby, adding that the lobby journalists allowed themselves to be manipulated.

It had to end in tears, of course. Alan Duncan believes that Campbell lost his sense of perspective over Andrew Gilligan's reporting. It was a failure of judgment and the most counter-productive tantrum in the history of politics. Neil Kinnock, Peter Hain and Campbell's former editor Eve Pollard defend Campbell. Kinnock says that when Campbell was a journalist he was always ready to help because in many respects he was angry on our behalf but he was never a propagandist', which contradicts some of the other contributors to this programme. Hain says Campbell understood better than anyone the 24-hour news agenda. My own view is that Campbell altered the way government is now seen by the public, for the worse. People realise that presentation is everything to this government. It is no longer trusted or believed except by the faithful. Perhaps, though, winning in politics is all that matters and by that measure Campbell succeeded. It came at a price, though.