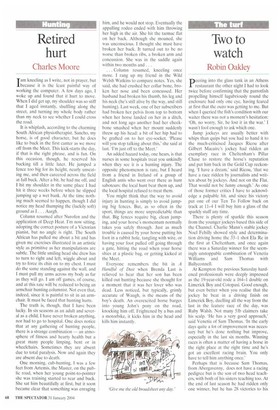 JTarn kneeling as I write, not in prayer, but because it is the least painful way of working the computer. A few days ago, I woke up and found that it hurt to move. When I did get up, my shoulder was so stiff that I aged instantly, shuffling along the street, and turning my whole body rather than my neck to see whether I could cross the road.

It is whiplash, according to the charming South African physiotherapist. Sancho, my horse, is of good character, but he does like to buck in the first canter as we move off from the Meet. This kick-starts the day, if that is the right phrase, and is fun. On this occasion, though, he reserved his bucking till a little later. He jumped a fence too big for its height, nearly unseating me, and then careered across the field at full buck. After a bit, he had me off, and I hit my shoulder in the same place I had hit it three weeks before when he slipped jumping up a wet bank. At the time nothing much seemed to happen, though I did notice my head thumping the (luckily soft) ground as I . . Aargh.

Column resumed after Nurofen and the application of Deep Heat. I'm now sitting, adopting the correct posture of a Victorian pianist, but no angle is right. The South African has pulled me about a bit and has given me exercises illustrated in an artistic style as primitive as her manipulations are subtle. The little smiling head she drew has to turn to right and left, wiggle about and try to force its chin on to my chest. I must do the same standing against the wall, and I must pull my arms across my body as far as they will go. I am off games, of course, and at this rate will be reduced to being an armchair hunting columnist. Not even that, indeed, since it is painful to sit in an armchair. It must be faced that hunting hurts.

The truth is, though, that I have been lucky. In six seasons as an adult and several as a child, I have never broken anything, nor had to go to hospital. One does notice that at any gathering of hunting people, there is a strange combination — an atmosphere of fitness and hearty health but a great many people limping, bent or in wheelchairs. Sometimes they are absent due to total paralysis. Now and again they are absent due to death.

One morning, cub-hunting, I was a few feet from Artemis. the Master, on the public road, when her young point-to-pointer she was training started to rear and buck. She sat him beautifully at first, but it soon became clear that something was enraging him, and he would not stop. Eventually the appalling rodeo ended with him throwing her high in the air. She hit the tarmac flat on her back. Although she moaned, she was unconscious. I thought she must have broken her back. It turned out to be no worse than broken ribs, a broken arm and concussion. She was in the saddle again within two months and. .

. Column resumed, kneeling once more. I rang up my friend in the Wild Welsh Watkins to compare notes. Yes, she said, she had crushed her collar bone, broken her nose and been concussed. Her husband had broken his thumb, his leg and his neck (he's still alive by the way, and still hunting). Last week, one of her subscribers had broken her pelvis from top to bottom when her horse landed on her in a ditch, and not long ago another had her cheekbone smashed when her mount suddenly threw up his head: a bit of her hip had to be grafted on to her eye-socket. 'Please will you stop talking about this,' she said at last. 'I'm just off to the Meet.'

An added hazard today, one hears, is that nurses in some hospitals treat you unkindly when they see it is a hunting injury. The opposite phenomenon is rare, but I heard from a friend in Ireland of a group of English antis who went over there as hunt saboteurs: the local hunt beat them up, and the local hospital refused to treat them.

You might think that the way to avoid injury in hunting is simply to avoid jumping big fences. But, as so often in the sport, things are more unpredictable than that. Big fences require big, clean jumping, and your horse's momentum normally takes you safely through. Just as much trouble is caused by your horse putting his foot in a rabbit hole, tangling with wire, or having your foot pulled off going through a gate, hitting the road when your horse shies at a plastic bag, or getting kicked at the Meet.

Everyone remembers the bit in A Handful of Dust when Brenda Last is relieved to hear that her son has been killed out hunting because she thought for a moment that it was her lover who was dead. Less noticed, but typically, grimly accurate of Waugh, is the means of the boy's death. An overexcited horse barges into young John's pony on the road, knocking him off. Frightened by a bus and a motorbike, it kicks him in the head and kills him instantly.