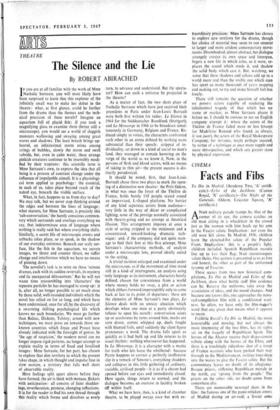 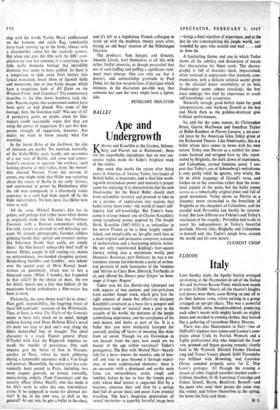 To Die in Madrid. (Academy Two, 'A' certifi- cate.)—Echo of the Jackboot. (Cameo Royal, 'X' certificate.)—The Night of the Generals. (Odeon, Leicester Square, 'A' certificate.) ANAZI military parade tramps by. Out of the corner of its eye, the camera catches an old man sitting in a wheelchair in the crowd just as the woman with him hauls up his arm in the Fascist salute. Implication : not even the old were left alone. In Madrid, 1936, children learn the clenched-fist salute of the Popular Front. Implication : this is a people's fight, children included. Spanish Republican recruits line up to kiss their flag; Nazi stormtroopers salute theirs. One gesture is presented to us as free and honest, the other as part of the uniformed tyranny of Fascism.

These scenes from two new historical com- pilations, To Die in Madrid and Echo of the Jackboot, show what brittle stuff film evidence can be. Reverse the uniforms, take away the association of ideas, and the mood changes. And because one knows this, one approaches the news- reel-compilition film with a conditioned wari- ness. So often, we have only the film-maker's word that any given shot means what it appears to mean.

Frederic Rossif's To Die in Madrid, the more honourable and moving, but not always the more interesting of the two films, has its sights set on the tragedy of Republican Spain. The heroes of the Alcazar receive their dispassionate tribute along with the heroes of the Ebro, and there is a touchingly ridiculous shot of a troop of Franco warriors who have pushed their way through to the Mediterranean, rushing knee-deep into the waves to give the Fascist salute. But the commentary leaves no doubt of its allegiance. Basque priests, stiffening Republican morale in the north, are 'sprung from the people.' The priests on the other side, no doubt come from somewhere else.

There are memorable newsreel shots in the film: the famous one of the panic-stricken streets of Madrid during an air-raid; a Soviet arms ship with the words 'Carlos Marx' emblazoned on the hammer and sickle flag; ramshackle lorry-loads moving up to the front, always with a clenched-fist salute for the roadside camera. But when one puts this film with the BBC com- pilation we saw last summer, it is surprising how little really dramatic footage this incredibly dramatic war seems to have yielded. So there is a temptation to slide away from history into lyrical evocation, insert shots of Spanish fields and mountains, one or two battle images which have a suspicious look of All Quiet on the Western Front. And Guernica? The commentary describes it; the film shows bombers, raid, vic- tims. Reason argues that cameramen cannot have been quite so well placed. Was some of this footage, then, the Guernica raid? Was any of it? A pernickety point, no doubt, when the film- makers could reasonably argue that they are using the power of suggestion. It's just this dan- gerous strength of suggestion, however, that makes me want to know exactly what I'm watching.

In the Soviet Echo of the Jackboot, the sins of omission are scarlet. No mention, naturally, of the Stalin-Hitler pact; hardly any awareness of a war west of Berlin; and some real contor- tionist's exercises to separate `the workers,' seen looking gloomy at their lathes, from `the masses' who cheered Nazism. From this version of events, one might think that Hitler was racketing about the streets of Berlin in the early 'thirties, and summoned to power by Hindenburg after the old man (compared, in a cheerlessly ironic sequence, to a seal) had been tipped off by the Ruhr industrialists. No hint, here, that Hitler won votes as well.

All the same, Mikhail Romm's film has its points, and perhaps had rather more when shown as originally made (the title then was Ordinary Fascism), with a Russian commentary which, I'm told, wasn't so devoted to self-defeating sar- casm. Its atrocity photographs, German soldiers grinning beside their spitted and* tortured victims like fishermen beside their catch, are simply there: the film doesn't unbearably lend itself to horror. Hitler, caught in full ranting cry, makes an extraordinary, two-handed chopping gesture; Hindenburg bumbles and fumbles : men labour over the special copy of Mein Kampf, hand- written on parchment, which was to last a thousand years. (What, I wonder, has happened to that relic?) In the choice of shots, the eye for detail, there's just a hint that behind all the wearisome Soviet orthodoxies a film-maker has been at work.

Fictionally, the same theme won't let us alone: Nazi guilt, responsibility, the lingering threat of those old comrades' reunions of the Wehrmacht. That, at least, is what The Night of the Generals seems to have very much on its mind; though without having read Hans Hellmut first's novel it's none too easy to pick one's way _along the film's dishevelled line of thought. The chief character is a crack Panzer general (Peter O'Toole) with Jack the Ripperish inipulses to- wards the murder of prostitutes. One such impulse gets the better of him in Warsaw; another in Paris, where he starts gibbering during a lamentable encounter with a Van Gogh self-portrait. Meanwhile, the entire cast has con- veniently been posted to Paris, including two more suspect generals, an honest, cowardly, music-loving orderly (Tom Courtenay) and the security officer (Omar Sharif), who has made it his life's work to solve this one, non-military crime. Is he supposed to stand for abstract jus- tice? Is he, in his own way, as daft as the general? At any rate, he gets a bullet in the chest, and it's left to a lugubrious French colleague to catch up with the madman, twenty years after, during an old boys' reunion of the Nibehmgen Division.

The producer, Sam Spiegel, and director, Anatole Litvak, hurl themselves at all this with rather fretful intensity, as though persuaded that out of such huffing and puffing a significant state- ment must emerge. One can only say that it doesn't; and acknowledge gratitude to Paul Dehn, for the few waspish lines of dialogue which intimate, in the discreetest possible way, that someone has seen the story might have a lighter side.