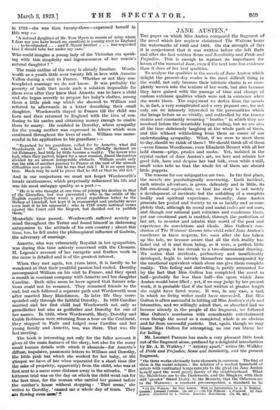 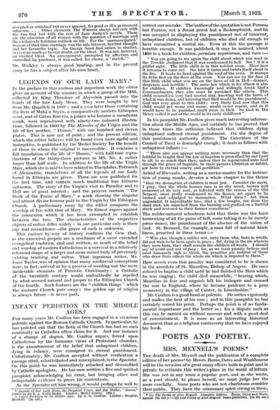 Tun paper on which Miss Austen composed the fragment of

the novel which her nephew christened The Maisons bears the watermarks of 1803 and 1804. On the strength of this it is conjectured that it was written before she left Bath and after she had written Sense and Sensibility and Pride and Prejudice. This is enough to warrant its importance for lovers of the immortal Jane, even if the text bore less evidence than it does of her best qualities.

To analyse the qualities in the novels of Jane Austen which

delight the present-day reader is the most difficult thing in the world, not only because their intrinsic charm is so com- pletely woven into the texture of her work, but also because they have gained with the passage of time and change of custom extrinsic qualities which were not in existence when

she wrote them. The enjoyment we derive from the novels is, in fact, a. very complicated and a very piquant one, for not only are we intensely interested in the personalities which she brings before us so vividly, and enthralled by the teacup storms and constantly recurring " bustles " in which they arc involved before the invariably happy ending, but we are also all the time deliciously laughing at the whole pack of them, and this without withholding from them an ounce of our understanding sympathy. What, if we were to meet them to-day, should we think of them ? We should think all of them

—even Emma Woodhouse, even Elizabeth Bennet with all her bold charm—prigs, prudes and snobs. Yet, isolated in the crystal casket of Jane Austen's art, we love and admire her good folk, hate and despise her bad folk, even while a still,

small voice tells us that the whole lot of them are absurd little puppets.

The reasons for our subjugation are two. In the first place, the novels are psychologically convincing. Each incident,

each minute adventure, is given, delicately and in little, its full emotional equivalent, so that the story is not merely

a development of incidents but the unfolding of a complete bodily and spiritual experience. Secondly, Jane Austen presents her period and Society to us so lucidly and so com- pletely that, although its moral and social codes are not ours,

and though our rational part criticizes and condemns them, yet our emotional part is enabled, through the perfection of her art, to re-enter and inhabit that world of the past and experience its convictions and ideals. Miss Oulton's con- clusion of The Watsons2 throws into vivid relief Jane Austen's

excellence in these respects, for, soon after she has taken up the tale, we become aware that all the rich reality has faded out of it and from being, as it were, a perfect little Dresden group, it has shrunk to a two-dimensional drawing.

We notice that incidents, perfunctory and insufficiently developed, begin to intrude themselves unaccompanied by the emotional equivalent which alone can give them complete reality. This fading and shrivelling is partly accounted for

Austen would have filled ; yet, if we may judge by her present work, it is probable that if she had written at greater length she might have fared worse. It was, in any case, a task in which no living writer could have succeeded. But Miss Oulton is often successful in hitting off Miss Austen's style and

intonation, and we willingly admit that, so absorbed had we become already in the people of the fragment, we followed Miss Oulton's conclusion with considerable entertainment even though the novel as a completed whole is an obvious and far from successful pastiche. But, again, though we may blame Miss Oulton for attempting, no one can blame her for failing.

Mr. Leonard Parsons has made a very pleasant little book out of the fragment alone, prefaced by a delightful introduction by Mr. A. B. Walkley.1 " Artistry apart," writes Mr. Walkley of Pride and Prejudice, Sense and Sensibility, and the present

"the three works obviously have elements in common. The first of these is the social scheme : the relation of a modest household of sisters with contrasted temperaments to the great (as Jane Austen herself used the word great) family of the neighbourhood. What the Middletons are to the Dashwoods, and the BI ingleys, with their still 'greater' friend Darcy, to the Bennets, that the Osbornes arc to the Watson-; a- constant pre-occupation, a standard to be • (1) The Wahoire. By Jane Austen. With an Introduction by A. B. Walkley. Louden: Leonard Passau.. net.}---(2) The Wateant: a Fragment. By Jaws Austen. Concluded by L. Oulton. London: Hutchinson. [7a. 6d. net.] accepted or criticized but never igeored, for good or ill a permanent influence. . . . Other elements The Watson sharp not only with the two first but with the rest of Jane Austen's novels. These are the obsession of all women with the question of marriage and the exclusively feminine outlook on life. For the unemaneipated ' woman of that time marriage was the sole interest, her first thought and her favourite topic. No George Sand had arisen to shatter, or even so much as to cast doubt, on the ideal. It was not, however, an exalted ideal. An arrangement, prompted by affection and controlled by prudence, it was called, for choice, a ' match."

Mr. Walkley is always good !reading, and in the present essay he has a subject after his own heart.