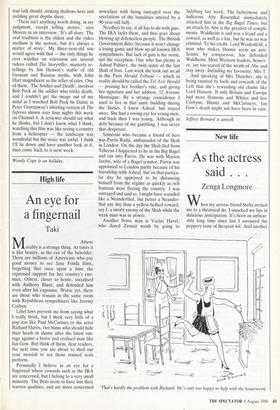 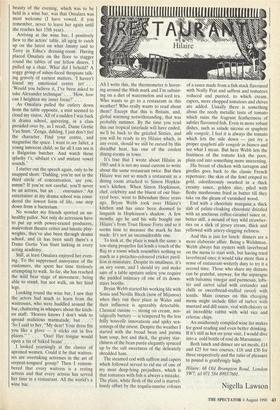 When my actress friend Stella invited me to a theatrical do, I smacked my lips in delicious anticipation. It's been an unbear- ably long time since last I savoured the peppery taste of thespian wit. And another 'That's hardly the problem with Richard. He's only too happy to hclp with the housework.' beauty of the evening, which was to be held in a wine bar, was that Omalara was most welcome (I have vowed, if you remember, never to leave her again until she reaches her 15th year).

Arriving at the wine bar, I positively flew to the actors' table, all agog to catch up on the latest on what Jimmy said to Terry in Edna's dressing-room. Having placed Omalara on the floor to stagger round the tables of our fellow diners, I pulled up a chair. What did I behold? A soggy group of ashen-faced thespians talk- ing gravely of earnest matters. 'I haven't found my emotional centre yet' . . . 'Would you believe it, I've been asked to take Alexander technique' . . . 'How, how can I heighten my inner focus?' . . .

As Omalara pulled the cutlery down from the table opposite, a mist seemed to cloud my vision. All of a sudden I was back in drama school, quivering, in a class presided over by, as I recall, Dame Gertie Van Stutt. `Zenga, dahling, I just don't feel the character. Find your centre, and magnetise the space. I want to see Juliet, a young innocent child; so far all I can see is a Bulgarian butcher. And watch those splashy t's, sibilant s's and mutant vowel sounds.'

I stutter out the speech again, only to be snapped short: Dahling, you're not in the third circle of concentration, are you, mmm? If you're not careful, you'll never be an actress, but an . . . entertainer.' An entertainer at my drama school was consi- dered the lowest form of life, one step down from a bacterium.

No wonder my friends sported an un- healthy pallor. Not only do actressess have to put up with power-crazed producers, malevolent theatre critics and lunatic play- wrights, they've also been through drama school, and (it has been said) there's a Dame Gertie Van Stutt lurking in every acting academy.

Still, at least Omalara enjoyed her even- ing. To the suppressed annoyance of the customers, she spent her time tirelessly attempting to walk. So far, she has reached the wild bear stage of movement, being able to stand, but not walk, on her hind legs.

Looking round the wine bar, I saw that the actors had much to learn from the

waitresses, who were huddled around the bar, chattering in whispers about the kitch- en staff: 'Heaven knows I don't wish to spread malicious marmalade, but . . . 'So I said to her, "My dear! Your dress fits you like a glove — it sticks out in five places."' . . . `Ooo! Her tongue would open a tin of baked beans' . . . .

I looked yearningly at the cluster of aproned women. Could it be that waitres- ses are overtaking actresses in the art of serpent-tongued gossip? Then I remem- bered that every waitress is a resting

actress and that every actress has served her time in a restaurant. All the world's a wine bar.