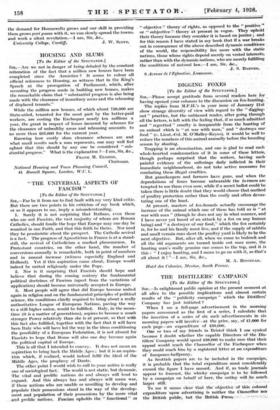 " THE UNIVERSAL ASPECTS OF FASCISM " [To the Editor

SIR,—Far be it from me to find fault with my very kind critic. But there are two points in his criticism of my book which, or so it appears to me, imply a misunderstanding.

1. Surely it is not surprising that Italians, even those who are not Fascists, the vast majority of whom are Roman Catholics, should fondle the hope that Europe may one day be reunited in one Faith, and that this faith be theirs. Nor need they be pessimistic about the prospect. The Catholic revival is a fact. The progress of Agnosticism in France is at a stand- still, the revival of Catholicism a marked phenomenon. hi Protestant countries, on the other hand, the number of conversions annually is remarkable, both in point of numbers and in annual increase (witness especially England and Holland). Yet if this aspiration came about, Europe would indeed be united religiously under the Pope.

2. Nor is it surprising that Fascists should hope and believe that during the coming century the fundamental political doctrines of Fascism (apart from the variations of application) should become universally accepted in Europe.

3. Most people will agree that did Europe become united again in religion and on the fundamental-principles of political science, the conditions chiefly required to bring about a really authoritative League of European Nations, paving the way to a still higher union, would be fulfilled. Italy, in the mean- time (it is a matter of generations), aspires to become a mueh stronger Power relatively than she is at present, so that with this fact also fulfilled, together with the fact that it will have been Italy who will have led the way in the ideas conditioning the possibility of a European Federation, it is not absurd for Fascists to hope that Rome will also one day become again the political capital of Europe.

This is all that I intended to convey. It does not mean an aspiration to bring back the Middle Ages ; but it is an aspira- tion which, if realized, would indeed fulfil the ideal of the Middle Ages, the prophecy of Dante.

The other point I would wish to call to your notice is really one of sociological fact. The world is not• static, but dynamic. The vital and prolific nations do and always will tend to expand. And this always has and always will mean war, if those nations who are unable or unwilling to develop and populate their possessions stand in the way of the develop- ment and population of their possessions by the more vital and prolific nations. Fascism upholds the " functional " or " objective -! theory- of rights, as opposed to the t` positive " or " subjective theory at present in- vogue. They uphold their theory, because they consider it is based on justice ; and for this reason I. have stated in my book that if a war breaks out in consequence of the above described dynamic conditions of the world, the responsibility lies more with the static nations, those whose rights depend merely on vested interests, - rather than with the dynamic nations, who arc merely fulfilling the conditions of natural law.—I am, Sir, &c.,