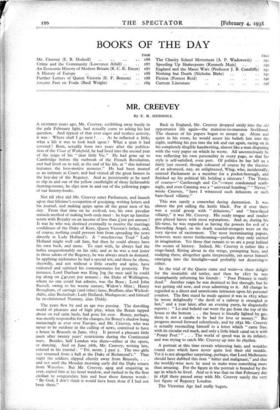 A HUNDRED years ago, Mr. Creevey, scribbling away busily in the pale February light, had actually come to asking his last question. And typical of that ever eager and restless activity, it was : Where shall I go next ? . . . As he reflected a little, what a life it was to look back upon ! What a span it had covered ! Born, actually born two years after the publica- tion of the Vicar of Wakefield, he had lived into the second year of the reign of his "dear little Vic." He had gone up to Cambridge before the outbreak of the French Revolution, and had lived on to rail, at the end of his life, at "this infernal nuisance the loco-motive monster." He had been treated as an intimate at Court, and had visited all the great houses in the hey-day of the Regency. And as persistently as he used to slip in and out of the yellow candlelight of those fashionable drawing-rooms, he slips now in and out of the yellowing pages of our history-books.

Not till r8o2 did Mr. Creevey enter Parliament, and launch upon that lifetime's occupation of gossiping, writing letters and his journal, and making quips upon all the great men of his day. From that time on he evolved, too, his own peculiar miracle method of making both ends meet : he kept up familiar terms with Royalty on an income of less than £200 per annum ! It was he who was destined eventually to receive the marriage confidence of the Duke of Kent, Queen Victoria's father, and, of course, nothing could prevent him from spreading the news directly at Lady Holland's. A "mischievous Toad" Lady Holland might well call him, but then he could always have his own back, and more. To start with, he always had the ladies unquestionably on his side, and as he was a real jester in those salons of the Regency, he was always much in demand. In applying nicknames he had a special wit, and those he chose, shrewdly, and not withouf a little cruelty and spite, have endeared and satirised his contemporaries for posterity. For instance, Lord Durham was King Jog (he once said he could jog along on £4o,000 per annum) ; the Duke of Wellington, whom no one could but admire, was the Beau ; Lord John Russell, owing to his weeny stature, Widow's Mite ; Henry Brougham, of carriage (and other) fame, Bruffam, alias Wicked- shifts, alias Beelzebub; Lady Holland, Madagascar; and himself he re-christened Ntunmy, alias Diddy.

The years flew by and an age was passing. The dawdling world of pleasure and of high play, when the Beaux tapped about on red satin heels, had gone for ever. Boney, perhaps, was mostly responsible for the changes, for Boney's shadow hung menacingly as ever over Europe, and Mr. Creevey, who was never to be outdone in the culling of news, contrived to have a house in Brussels in June, x815. It proved a pleasant little jaunt after twenty years' restrictions during the Continental wars. Besides, half London was there—either at the opera, or dancing. And on June z6th, Mr. Creevey, writing late, entered in his journal : "Fri. morn. past 2. The two girls just returned from a ball at the Duke of Richmond's." That night the soldiers slipped silently away from Brussels, . . . and not until the Monday morning early did the Duke return from Waterloo. But Mr. Creevey, agog and enquiring as ever, espied him at his hotel window, and rushed to be the first civilian to congratulate him and hear those famous words : "By God, I don't think it would have been done if I had not been there." Back in England, Mr. Creevey dropped easily into the old opportunist life again—the mansion-to-mansion livelihood. The sheaves of his papers began to mount up. Alone and quiet in his room, he would assert his beliefs late into the night, stabbing his pen into the ink and out again, racing on in his completely illegible handwriting, almost like a man disputing with the very paper on which he wrote. All unconsciously he was reflecting his own personality in every page, so that his style is self-satisfied, even pert. Of politics he has left us a fairly just record, though coloured of course by the theories of an advanced, nay, an enlightened, Whig, who, incidentally, entered Parliament as a member for a pocket-borough, and finished up his political life holding a sinecure ! The Tories of course—" Castlereagh and Co."—were condemned scath- ingly, and even Canning was a "universal humbug." "Never," wrote Creevey, "have I witnessed such delusions or such bare-faced villainy" This was surely a somewhat daring damnation. It was almost the pot calling the kettle black. For if ever there was a social gossip with "delusions," and "bare-faced villainy," it was Mr. Creevey. His ready tongue and readier pen played havoc with most reputations. And as, during his life-time, he was regarded as having the powers for evil of a Recording Angel, on his death scandal-mongers were on the very tip-toe of excitement. The most incriminating papers, however, were never forthcoming—perhaps they only -existed in imagination. Yet those that remain to us are a peep behind the scenes of history. Indeed, Mr.- Creevey is rather like a .stage-hand, flitting about in the wings, prompting here, and nudging there, altogether quite irrepressible, yet never himself emerging into the limelight—and probably not deserving to either.

So the trial of the Queen came and went—a sheer delight for the insatiable old tattler, and then by 1827 he was triumphantly informing his friends : "Poor Prinney is really dead." Another reign he was destined to live through, but he was getting old now, and even admitting to it. All change he regarded as a direct and unwelcome intrusion upon his personal comfort. The futt stand he made against it was in 1825 When he wrote delightedly "the devil of a railway is strangled at last," and a year later, after an evening party, he disgustedly reports : "Lo and behold out went the gas from the top of the house to the bottom . . . the house is literally lighted by gas, there is not a candle to be had for love or money." But progress moved forward relentlessly, and by 1832 Mr. Creevey is actually reconciling himself to a letter which "came free, with its circular red Mark, and only a little black canal on it with 'Penny Pose " . . . The world of speed was in its infancy, and was trying to catch Mr. Creevey up into its rhythm.

A portrait at this time reveals whitening hair, and wrinkles round eyes which have never quite lost their old twinkle. Yet it is not altogether surprising, perhaps, that Lord Melbourne should have dubbed this man "bitter and malignant," and that the worldly-wise mots he used to make were something more than amusing. For the figure in the portrait is branded by the age in which he lived. And so it Was that on that February day in 1838 there passed away with Mr. Creevey surely the very last figure of Regency London.

The Victorian Age had really begun.