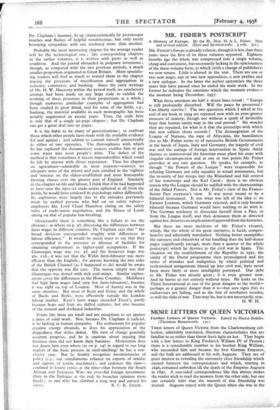 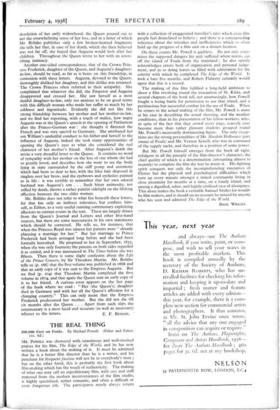 Further Letters of Queen Victoria. Edited by Hector Bolitho. (Thornton Butterworth. 158.) THESE letters of Queen Victoria from the Charlottenburg col- lection, admirably translated, illustrate characteristics that are familiar to us rather than throw fresh light on her. They begin with a few letters to King Frederick William IV of Prussia ; there is a considerable number to his brother King William, who succeeded him and became the first German Emperor, and the bulk are addressed to his wife Augusta. They are of great interest as revealing the extremely close frie dship which existed between the correspondents and which, starting in 1846, remained unbroken till the death of the Empress Augusta in i89o. A one-sided correspondence like this always makes the reader wish to read the answers from the other side, but one can certainly infer that the warmth of this friendship was mutual. Augusta stayed with the Queen when she was in the

desolation of her early widowhood, the Queen poured out to /ter the overwhelming sense of her loss, and in a letter of which Mr. Bolitho publishes only a few broken-hearted fragments she tells her that, in case of her death, which she then believed was not far off, she hoped that Augusta would look after her children. Throughout the Queen wrote to her with an aston- ishing intimacy.

Another one-sided correspondence, that of the Crown Prin- cess Frederick, daughter of the Queen, and 'Augusta's daughter- in-law, should be read, as far as it bears on this friendship, in connexion with these letters. Augusta, devoted to the Queen, thoroughly disliked her daughter, and this dislike was returned. The Crown Princess often referred to their antipathy. She complained that whatever she did, the Emperor and Augusta disapproved and crossed her. She saw herself as a most dutiful daughter-in-law, only too anxious to be on good terms with this difficult woman who made her suffer so much by her coldness and ingratitude. Evidently she did not like this strong friendship between her mother and her mother-in-law, and we find her reporting, with a touch of malice, how angry Augusta was at the Queen's speech at the opening of Parliament after the Franco-German war : she thought it flattered the French and was very uncivil to Germany. She attributed her son William's undutiful conduct to his father and herself to the influence of Augusta, indeed she took many opportunities of opening the Queen's eyes to what she considered the real character of her mother's friend. After Augusta's death she wrote a very dreadful letter to the Queen. It contains no word of sympathy with her mother on the loss of one whom she had so greatly loved, and describes how she went to see the body lying in state surrounded by the stiff pomp and ceremony which had been so dear to her, with the false hair disposed in ringlets over her brow, and the eyebrows and eyelashes painted as in life : it was terrible to remember that her own adored husband was Augusta's son . . . Such bitter animosity, not stilled by death, throws a rather painful sidelight on the lifelong affection between the two elder women.

Mr. Bolitho does not refer to what lies beneath these letters, for that has only an indirect relevance, but confines him- self, as Editor, to a very useful running commentary explaining allusions to current events in the text. These are largely drawn from the Queen's Journal and Letters and other first-hand sources, but there are some inaccuracies in his own statements which should be corrected. He tells us, for instance, that when the Princess Royal was sixteen her parents were " already planning a marriage for her." But her marriage to Prince Frederick had been arranged long before and she had been formally betrothed. He proposed to her in September, 1855, when she was only fourteenrthe parents on both sides regarded it as settled, and it was announced in The Times before she was fifteen. Then there is some slight confusion about the Life of the Prince Consort, by Sir Theodore Martin. Mr. Bolitho tells us (p. 166) that the first volume was published in 1868 and that an early copy of it was sent to the Empress Augusta. But we find (p. 204) that Theodore Martin completed the first volume in 1874, and that again the Queen sent an early copy of it to her friend. A curious error appears on the last page of the. book where we read : "Her (the Queen's) daughter died in Germany and with her all the Queen's affection for a changing country." This can only mean that the Empress Frederick predeceased her mother. But she did not die till six months after the Queen . . . Apart from such slips the commentary is a most lucid and accurate (as well as necessary)