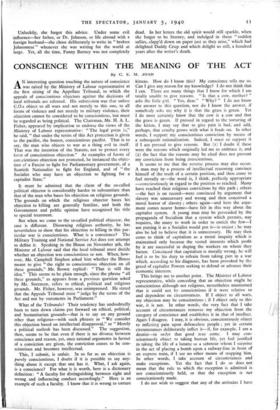 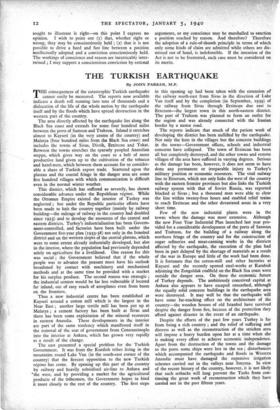 CONSCIENCE WITHIN THE MEANING OF THE ACT

AN interesting question touching the nature of conscience was raised by the Ministry of Labour representative at the first sitting of the Appellate Tribunal, to which the appeals of conscientious objectors against the decisions of local tribunals are referred. His submission was that unless C.O.s object to all wars and not merely to this one, to all forms of violence and not merely to military violence, their objection cannot be considered to be conscientious, but must be regarded as being political. The Chairman, Mr. H. A. L. Fisher, appeared by implication to endorse the views of the Ministry of Labour representative: " The legal point is," he said, " that under the terms of this Act protection is given to the pacifist, the honest, conscientious pacifist. That is to say, the man who objects to war as a thing evil in itself. That was the intention of the Statute, not to protect every form of conscientious objection." As examples of forms of conxientious objection not protected, he instanced the objec- tion of a Fascist to fight for Parliamentary government, of a Scottish Nationalist to fight for England, and of " the Socialist who may have an objection to fighting for a capitalist State."

It must be admitted that the claim of the so-called political objector is considerably harder to substantiate than that of the man who bases his objection on religious grounds. The grounds on which the religious objector bases his objection to killing are generally familiar, and both the Government and public opinion have recognised his title to special treatment.

But when we come to the so-called political objector, the case is different. Disowning religious authority, he has nevertheless to show that his objection to killing in this par- ticular war is conscientious. What is a conscience? The Military Training and National Service Act does not attempt to define it. Speaking in the House on November 9th, the Minister of Labour said that the local tribunal must decide whether an objection was conscientious or not. When, how- ever, Mr. Campbell Stephen asked him whether the House meant to give " the right to conscientious objection on all these grounds," Mr. Brown replied : " That is still the idea." This seems to be plain enough, since the phrase " all these grounds," as appears from a previous question asked by Mr. Sorensen, refers to ethical, political and religious grounds. Mr. Fisher, however, was unimpressed. He stated that the Appeals Tribunal must " judge by the terms of the Act and not by statements in Parliament."

What of the Tribunals? Their tendency has undoubtedly been to turn down claims put forward on ethical, political, and humanitarian grounds—that is to say on any ground other than religious—with such phrases as " We consider this objection based on intellectual disapproval," or " Merely a political outlook has been discussed." The suggestion, then, seems to be that even if there is no divorce between conscience and reason, yet, once rational arguments in favour of a conviction are given, the conviction ceases to be con- scientious and becomes intellectual.

This, I submit, is unfair. In so far as an objection is purely conscientious, I doubt if it is possible to say any- thing about it except that one has it. What, I ask again, is a conscience? For what it is worth, here is a dictionary definition: "A faculty for distinguishing between right and wrong and influencing conduct accordingly." Here is an example of such a faculty. I know that it is wrong to torture kittens. How do I know this? My conscience tells me so. Can I give any reason for my knowledge? I do not think that I can. There are many things that I know for which I am totally unable to give reasons. " Is that a cow, mother? " asks the little girl. " Yes, dear." " Why? " I do not know the answer to this question, nor do I know the answer, if somebody asks me why it is that the grass is green. Yet I do most certainly know that the cow is a cow and that the grass is green. If pressed in regard to the torturing of the kitten, I may say that to give pain is bad, and add, perhaps, that cruelty grows with what it feeds on. In other words, I support my conscientious conviction by means of a subsequent rationalisation. Indeed, I must so support it if I am pressed to give reasons. But (t) I doubt if these were the reasons which originally led me to embrace it, and (2) the fact that the reasons may be cited does not prevent my conviction from being conscientious.

It seems to me that the reverse process may also occur. A man may by a process of intellectual reasoning convince himself of the truth of a certain position, and then come to feel morally or—the word is, I think, perfectly appropriate --conscientiously in regard to the position so reached. Many have reached their religious convictions by this path ; others —the fact is on record—were convinced by argument that slavery was unnecessary and wrong and then conceived a moral horror of slavery ; others again—and here the argu- ment comes nearer home—have felt in this way about the capitalist system. A young man may be persuaded by the propaganda of Socialism that a system which permits, nay requires, the many to work in order to enrich the few—I am putting it as a Socialist would put it—is unjust ; he may also be led to believe that it is unnecessary. He may then come to think of capitalism as a moral iniquity which is maintained only because the vested interests which profit by it are successful in duping the workers on whom they batten. Convinced that capitalism is morally wrong, he will feel it to be his duty to refrain from taking part in a war which, according to his diagnosis, has been provoked by the greed of capitalist Powers seeking to defend or advance their economic interests.

This brings me to another point. The Minister of Labour representative, while conceding that an objection might be conscientious although not religious, nevertheless maintained that it could not be conscientious if it were relative to and dependent on circumstances. If I object to all wars, my objection may be conscientious ; if I object only to this war, it is not. In other words, the very fact that I take account of circumstances removes my objection from the category of conscience and establishes it in that of intellect. Again I disagree. I may, it is obvious, conscientiously object to inflicting pain upon defenceless people ; yet in certain circumstances deliberately inflict it—if, for example, I am a dentist—in order that good may come. I may con- scientiously object to taking human life, yet feel justified in taking the life of a lunatic or a saboteur whom I surprise in the act of placing a bomb upon a railway-line in front of an express train, if I see no other means of stopping him. In other words, I take account of circumstances and make exceptions. Yet the fact that I do so does not mean that the rule to which the exception is admitted is not conscientiously held, or that the exception is not conscientiously made.

I do not wish to suggest that any of the attitudes I have sought to illustrate is right—on this point I express no opinion. I wish to point out (t) that, whether right or wrong, they may be conscientiously held ; (2) that it is not possible to drive a hard and fast line between a position intellectually adopted and a conviction conscientiously held. The workings of conscience and reason are inextricably inter- twined ; I may support a conscientious conviction by rational arguments, or my conscience may be marshalled to sanction a position reached by reason. And therefore? Therefore the adoption of a rule-of-thumb principle in terms of which only some kinds of claim are admitted while others are dis- missed out of hand, is indefensible. If the intention of the Act is not to be frustrated, each case must be considered on its merits.