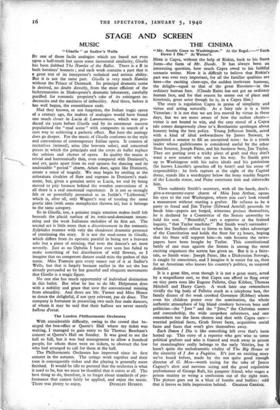 HERE is Capra, without the help of Riskin, back to his finest form—the form of Mr. Deeds. It has always been an interesting question, how much Capra owed to his faithful scenario writer. Now it is difficult to believe that Riskin's part was ever very important, for all the familiar qualities are here—the exciting close-ups, the sudden irrelevant humour, the delight—equal to that of the great Russians—in the ordinary human face. (Claude Rains has not got an ordinary human face, and for that reason he seems out of place and histrionic, great actor though he is, in a Capra film.)

The story is regulation Capra in praise of simplicity and virtue and acting naturally. As a fairy tale it is a little Victorian : it is not that we are less moved by virtue in these days, but we are more aware of how the author cheats— virtue is not bound to win, and the easy moral of a Capra tale comes dangerously close to'a Benthamite apothegm about honesty being the best policy. Young Jefferson Smith, acted with a kind of ideal awkwardness by James Stewart, is appointed a senator to fill an unexpired term : he is a youth leader whose guilelessness is considered useful by the other State Senator, Joseph Paine, and his business boss, Jim Taylor. They are putting over a tricky piece of graft and they don't want a new senator who can see his way. So Smith goes up to Washington with his naïve ideals and his patriotism (he knows Lincoln's speeches off by heart) and his sense of responsibility : he feels rapture at the sight of the Capitol dome, stands like a worshipper below the bony marble fingers of the Lincoln statue, and Paine entertains him and sidetracks him.

Then suddenly Smith's secretary, with all the harsh, don't- give-a-twopenny-curse charm of Miss Jean Arthur, opens his eyes to the real Washington, where you can't look round a monument without starting a grafter. He refuses to be a party to fraud and Jim Taylor (Edward Arnold) proceeds to break him—papers are forged, witnesses perjure themselves, he is declared by a Committee of the Senate unworthy to hold his seat. " Beautiful," says a reporter at the framed inquiry, " that Taylor machine." But Smith won't surrender: when the Senators refuse to listen to him, he takes advantage of the Constitution and holds the floor for 23 hours, hoping that his State will support him—in vain because the news- papers have been bought by Taylor. This constitutional battle of one man against the Senate is among the most exciting sequences the screen has given us. But it is a fairy- tale, so Smith wins : Joseph Paine, like a Dickensian Scrooge, is caught by conscience, and I imagine it is easier for us, than for an American who knows his country's politics, to suspend disbelief.

It is a great film, even though it is not a great story, acted by a magnificent cast, so that Capra can afford to fling ,away on tiny parts men like Eugene Pallette, Guy Kibbee, Thomas Mitchell and Harry Carey. A week later one remembers vividly the big body of Pallette stuck in a telephone box, the family dinner of the weak crooked Governor (Kibbee) whom even his children pester over the nomination, the whole authentic atmosphere of big bland crookery between boss and politician—the " Joes " and the " Jims," the Christian names and comradeship, the wide unspoken references, and one remembers too the faces chosen and shot with Capra care— worried political faces, Grub Street faces, acquisitive social faces and faces that won't give themselves away.

Each Dawn I Die is like something left over that's been hotted up. This story of a reporter who gets- wise to some political grafters and who is framed and stuck away in prison for manslaughter really belongs to the early 'thirties, but it hasn't quite the melodramatic vitality of The Big House or the sincerity of I Am a Fugitive. It's just an exciting story we've heard before, made by the not quite good enough director of G. Men—worth seeing for the sake of James Cagney's alert and nervous acting and the good regulation performance of George Raft, his gangster friend, who stages a prison mutiny to wring a confession out of the right man. The picture goes out in a blast of bombs and bullets: odd that it leaves so little impression behind. GRAHAM GREENE.