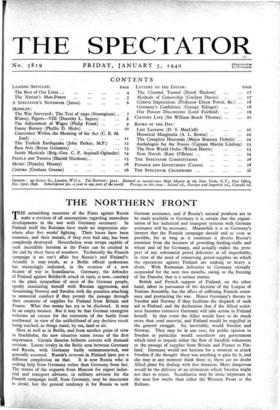 THE astonishing successes of the Finns against Russia make a revision of all assumptions regarding immediate developments in the war with Germany necessary. In Finland itself the Russians have made no impression any- where after five weeks' fighting. Their losses have been immense, and their morale, if they ever had any, has been completely destroyed. Nevertheless even troops capable of such incredible heroism as the Finns can be crushed in the end by sheer force of numbers. Technically the Finnish campaign is no one's affair but Russia's and Finland's. Actually it may result, as a Berlin official spokesman has menacingly indicated, in the creation of a new theatre of war in Scandinavia. Germany, the defender of Finland against Bolshevik attack in 1920, is now, contrary to the plain sympathies of most of the German people, openly associating herself with Russian aggression, and threatening Norway and Sweden with the penalties attaching to unneutral conduct if they permit the passage through their countries of supplies for Finland from Britain and France. What that means has yet to be disclosed. It may be an empty menace. But it may be that German strategists welcome an excuse for the extension of the battle front northward in view of the unlikelihood of any decisive result being reached, as things stand, by sea, land or air.

Here as well as in Berlin, and from another point of view in Stockholm, the new situation raises issues of the first importance. Certain theories hitherto current will demand revision. Latent rivalry in the Baltic area between Germany and Russia, with Germany badly outmanoeuvred, was generally assumed. Russia's reverses in Finland have put a different complexion on that. It is now Russia who is seeking help from Germany rather than Germany from her. The stories of the requests from Moscow for expert indus- trial and transport advisers, or military advisers for the Finnish campaign itself, from Germany, may be inaccurate in detail, but the general tendency is for Russia to seek German assistance, and if Russia's natural products are to be made available to Germany it is certain that the organi- sation of her industrial and transport systems with German assistance will be necessary. Meanwhile it is to Germany's interest that the Finnish campaign should end as soon as possible, for as long as it continues it diverts Russia's attention from the business of providing feeding-stuffs and wheat and oil for Germany, and actually makes the pros- pect of any substantial petrol deliveries at all improbable, in view of the need of conserving petrol-supplies on which the operations against Finland are making so heavy a drain. With Rumanian deliveries to Germany virtually suspended for the next two months, owing to the freezing of the Danube, that is a serious matter.

British and French support of Finland, on the other hand, taken in pursuance of the decision of the League of Nations Assembly, has the effect of stiffening Finnish resist- ance and protracting the war. Hence Germany's threats to Sweden and Norway if they facilitate the dispatch of such aid to Finland, and the declaration that if the Allied assist- ance becomes extensive Germany will take action in Finland herself. In that event the Allies would have to do much more than send material, and Finland would be engulfed in the general struggle. So, inevitably, would Sweden and Norway. They may be in any case, for public opinion in Sweden in particular would overthrow any government which tried to impede either the flow of Swedish volunteers or the passage of supplies from Britain and France to Fin- land. Germany would not hesitate for a moment to attack Sweden if she thought there was anything to gain by it, and she may at any moment think there is; there are no doubt Allied plans for dealing with that situation. More dangerous would be the delivery of an ultimatum which Sweden might not dare to reject. Scandinavia may be more important in the next few weeks than either the Western Front or the Balkans.