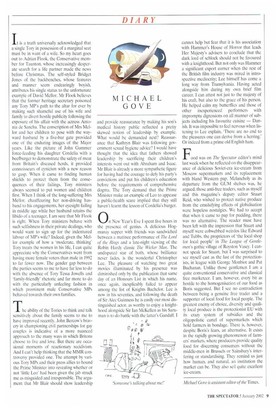 It is a truth universally acknowledged that a single Tory in possession of a marginal seat must be in want of a wife. So my heart goes out to Adrian Flook. the Conservative member for Taunton, whose increasingly desperate search for a life partner made the news before Christmas. The self-styled Bridget Jones of the backbenches, whose features and manner seem endearingly boyish, attributes his single status to the unfortunate example of David Mellor. Mr Flook believes that the former heritage secretary poisoned any Tory MP's path to the altar for ever by making such shameful use of his wife and family to divert hostile publicity following the exposure of his affair with the actress Antonia de Sancha. The conscription of Mrs Mellor and her children to pose with the wayward husband by a five-bar gate provided one of the enduring images of the Major years. Like the picture of John Gununer force-feeding his daughter Cordelia with a beefburger to demonstrate the safety of meat from Britain's diseased herds, it provided connoisseurs of cynicism with a new reason to gasp. When it came to finding human shields to protect them from the consequences of their failings, Tory ministers always seemed to put women and children first. When I think of the long-suffering Mrs Mellor, chauffeuring her non-driving husband to his engagements, her eyesight failing in middle age while her husband retains the libido of a teenager, I am sure that Mr Flook is right. When Tory ministers behave with such selfishness in their private dealings, who would want to sign up for the indentured labour of MP's wife? Indeed, given the Mellor example of how a 'moderate, thinking' Tory treats the women in his life, I can quite appreciate why the Conservatives went from having more female voters than male in 1992 to far fewer now. The gender gap between the parties seems to me to have far less to do with the absence of Tory Tessa Jowells and 'family-friendly' rhetoric and far more to do with the particularly unfeeling fashion in which prominent male Conservative MPs behaved towards their own families.

The ability of the Tories to think and talk sensitively about the family seems to me to have improved recently. John Bercow's bravery in championing civil partnerships for gay couples is indicative of a more nuanced approach to the many ways in which Britons choose to live and love. But there are occasional moments of reactionary recidivism. And I can't help thinking that the MMR controversy provided one. The attempt by various Tory MPs and their press allies to hound the Prime Minister into revealing whether or not 'little Leo' had been given the jab struck me as misguided and irresponsible. The argument that Mr Blair should show leadership

and provide reassurance by making his son's medical history public reflected a pretty skewed notion of leadership by example. What would be demanded next? Reassurance that Kathryn Blair was following government sexual hygiene advice? I would have thought that the idea that fathers showed leadership by sacrificing their children's interests went out with Abraham and Isaac. Mr Blair is already a more sympathetic figure for having had the courage to defy his party's convictions and put his children's education before the requirements of comprehensive dogma. The Tory demand that the Prime Minister make an example of Leo to appease a public-health scare implied that they still haven't learnt the lesson of Cordelia's burger.

On New Year's Eve I spent five hours in the presence of genius. A delicious Hogmanay supper with friends was sandwiched between a matinee performance of The Lord of the Rings and a late-night viewing of the Robin Hardy classic The Wicker Man. The undisputed star of both, whose brilliance never fades, is the wonderful Christopher Lee. The pleasure of watching two great movies illuminated by his presence was diminished only by the publication that same day of an Honours List in which his name, once again, inexplicably failed to appear among the list of Knights Bachelor. Lee is now in his seventies, and following the death of Sir Alec Guinness he is easily our most distinguished actor, as worthy to enjoy a knighthood alongside Sir Ian McKellen as his Samman is to do battle with the latter's GandaIf. I

cannot help but fear that it is his association with Hammer's House of Horror that leads Her Majesty's advisers to conclude that the dark lord of schlock should not be favoured with a knighthood. But not only was Hammer a significant export earner when the rest of the British film industry was mired in introspective mediocrity; Lee himself has come a long way from Transylvania. Having acted alongside him during my own brief film career. I can attest not just to the majesty of his craft, but also to the grace of his person. He helped calm my butterflies and those of other inexperienced performers with impromptu digressions on all manner of subjects including his favourite cuisine — Danish. It was impossible to feel nervous when listening to Lee explain, There are no end to the pleasures one can derive from a herring.' Or indeed from a prime old English ham.

Food was on The Spectator editor's mind last week when he reflected on the disappearance of delicious Soviet-era ice-cream from Moscow supermarkets and its replacement with bland Western pap. Melancholy as its departure from the GUM shelves was, he argued, those anti-free traders, such as myself and this magazine's deputy editor Stuart Reid, who wished to protect native produce from the emulsifying effects of globalisation were hopeless nostalgics. We had to accept that when it came to pap for pudding, there was no alternative. The reader must have been left with the impression that Stuart and myself were cobwebbed weirdos like Edward and Tubbs, the proprietors of 'the local shop for local people' in The League of Gentlemen's gothic village of Royston Vasey. I cannot speak for Stuart. but I was surprised to see myself cast as the last of the protectionists, in league with George Monbiot and Pat Buchanan. Unlike those gentlemen I am a quite conventional conservative and classical free marketeer. I am, however, every bit as hostile to the homogenisation of our food as Boris suggested. But I see no contradiction between being a genuine free trader and a supporter of local food for local people. The greatest enemy of choice, diversity and quality local produce is the protectionist EU with its crazy system of subsidies and the oligopolistic cartel of supermarkets which hold farmers in bondage. There is, however, despite Boris's fears, an alternative. It exists in the rapidly growing phenomenon of farmers' markets, where producers provide quality food for discerning consumers without the middle-men in Brussels or Sainsbury's interfering or standardising. They remind us just how human, and natural, an institution the market can be. They also sell quite excellent ice-cream.

Michael Gove is assistant editor of the Times.