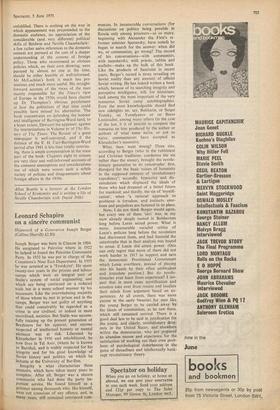 Leonard Schapiro on a sincere communist

Shipwreck of a Generation Joseph Berger (Collins /Harvill) £2.50) Joseph Berger was born in Cracow in 1904. He emigrated to Palestine where in 1922 he helped to found the Palestine Communist Party. In 1932 he was put in charge of the Comintern's Near East Department. In 1935 he was arrested as a 'Trotskyist'. He spent twenty-two years in the prisons and labour camps which were an integral part of Stalin's system of social engineering, and which are being continued on a reduced scale but in a more refined manner by his successors. Like the overwhelming majority of those whom he met in prison and in the camps, Berger was not guilty of anything that could conceivably be regarded as a crime in any civilised, or indeed in most uncivilised, societies. But Stalin was success- fully training up the present generation of Brezhnevs for his apparat, and anyone suspected of intellectual honesty or mental alertness was at risk. Liberated by Khrushchev in 1956 and rehabilitated, he now lives in Tel Aviv, (where he is known as Barzilai), and is widely respected for his integrity and for his great knowledge of Soviet history and politics, on which he lectures at the University of Bar-Ilan.

Integrity is what characterises these memoirs, which have taken many years to complete. After all, Berger was a sincere Communist who had done the party im- portant service. He found himself as a prisoner among thousands who, like himself, were not conscious of any offence, and, in many cases, still remained convinced corn-

munists. In innumerable conversations (for discussions on politics being possible in Russia only among prisoners—as so many, beginning with Alexander the First's re- former minister Speransky, have noted) he began to search for the answer: when did we, or communism, go wrong? The record of his conversations—with communists, with mensheviks, with priests, rabbis and mullahs—make up the bulk of this book. Like the products of Samizdat in recent years, Berger's record is more revealing on Soviet reality than any amount of official Soviet writing. He has indeed written a book which, because of its searching integrity and perceptive intelligence, will, for historians, rank among the most important of the very numerous Soviet camp autobiographies. Even the most knowledgeable should find new sidelights on, say, Bukharin, or Sergei Trotsky, on Yemelyanov or on Besso Lominadze, among many others (in the case of the last, it is of interest to compare the nonsense on him produced by the author or authors of what some naïve, or not so naïve, commentators have accepted as Khrushchev's memoirs).

What, then, went wrong? Three sins, according to Berger (who in the rabbinical and Christian traditions, condemns the sin rather than the sinner), brought the revolu- tionary generation to its catastrophe: first, disregard for the basic values of humanity in the supposed interests of 'revolutionary expediency'; secondly, hypocrisy and dis- simulation which displaced the ideals of those who had dreamed of a better future for mankind; and thirdly, the sin of 'mystifi- cation', when 'a rational approach to problems is forsaken, and instincts, emo- tions and prejudices are fastened in its place.

Now, I do not think Berger would agree, but every one of these 'sins' was, in my view already deeply rooted in Bolshevism long before Lenin seized power. What is more, innumerable socialist critics of Lenin's policies long before the revolution had discovered them, and had foretold the catastrophe that in their analysis was bound to ensue if Lenin did attain power. (One can only regret that more of them did not work harder in 1917 to support and save the democratic Provisional Government which Lenin overthrew, instead of playing into his hands by their often ambivalent and irresolute position.) But do revolu- tionaries ever learn from experience? I sus- pect that in most cases mystification and emotion take over from reason and insulate their minds from argument based on ex- periences. At all events, there was more excuse in the early 'twenties for men like the young Berger to be carried away by the ideals of communism, as he saw them, which still remained untried. There is a good deal less to be said in justification for the young, and elderly, revolutionary drop- outs in the United States, and elsewhere within the democracies, who are prepared to abandon reason and experience for the satisfaction of working out their own prob- lems of psychological disturbances in the guise of threadbare and intellectually bank- rupt revolutionary theory.