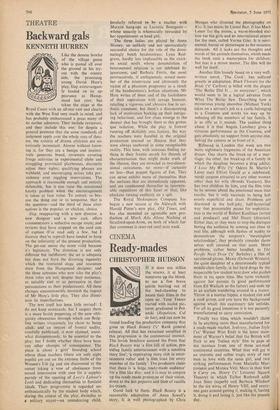 If it does not stiffen the sinews, it at least summons up the blood, to see a few brave spirits battling out of the bed-chamber to locate their films in the open air. Tony Tenser started with nudist pie, tures, graduated to Pol- anski (Repulsion, Cul de Sac), and can now be found heading the production company that gives us Black Beauty ('u' Rank general release). All that has remained unsullied in this progression is the commercial instinct. The lavish brochure assured the Press that Black Beauty was 'a film full of action, pro= viding family entertainment with a sensitive story line', 'a captivating story rich in enter- tainment value' and 'a film treat for every member of the family'. The producers claim that there is 'a large ready-made audience' for a film like this: and it is easy to conjure up the ready-made prototype of their vision, down to the last popcorn and blob of vanilla ice-cream.

Good luck to them. Black Beauty is a reasonable adaptation of Anna Sewell's story, It is well photographed by Chris Menges who directed the photography on Kes. It has music by Lionel Bart. It has Mark

Lester for the mums, a warm-blooded stal- lion for the girls and an international sexpot for the men, called Verina Glas. It is senti- mental, heroic or picturesque as the occasion demands. All it lacks are the thoughts and words of the animals themselves, which made the book such a masterpiece for children; but that is a minor matter. The film will do well for itself.

Another film loosely based on a very well-

written novel, 'The Cook', has suffered greatly in adaptation. Black Flowers for the Bride ('x' Carlton) is billed with the slogan The Butler Did It ...to everyone! ',. which would seem to be a logical advance from What The Butler Saw. Describing how a mysterious young smoothie (Michael York) takes on a servant's job at a castle belonging to a Countess and works his way up by seducing all the members of her family, it is as silly as it ,sounds. The saddest thing about it is that Angela Lansbury gives a virtuoso performance as the Countess, and gets absolutely no support from anyone else, behind the camera or in front of it.

Released in London this week are two more nightmare fragments of the American dream. One charts the break-up of a mar- riage; the other, the break-up of a family in which the daughter becomes a drug addict. I Love My Wife (`x' Odeon St. Martin's Lane) stars Elliott Gould as a celebrated, randy surgeon attracted to any other woman other than his wife (Brenda Vaccaro). She has two children by him, and the film tries to be serious about the emotional mess that results, but it only succeeds in being hid- eously superficial and sham. Problems are discussed in the half-joky, half-hysterical way that presumably passes for sophistica- tion in the world of Robert Kaufman (writer and producer) and Mel Stuart (director). Either that, or they want to stop the dialogue boring the audience by coming too close to real life; although with flashes of nudity to demonstrate the surgeon's 'meaningless relationships', they probably consider them- selves well covered on that score. More problems, rather better handled, in The People Next Door ('x' Berkeley) a film of unrelieved gloom. Maxie (Deborah Winters), the quiet daughter of a determinedly typical middle-class family, is fed hard drugs by the respectable law student next door who pushes them in his spare time. She turns violently against her parents (a good performance from Eli Wallach as the father) and ends up in an asylum wandering around in a trance. Throw in a maniac hippie, a student riot and a rock group, and you have the background against which this cautionary tale unfolds. For all its good intentions it is too patiently manufactured to carry conviction.

Finally two films which wouldn't claim to be anything more than manufactured for a ready-made market. Jealousy, Italian Style ('AA' Warner West End) is the latest state- ment of Warner's belief that the British will flock to any 'Italian style' film to gape at sex maniacs from one of those sex-mad continental countries. What they will get is an unerotic and rather tragic story of two men in love with the same girl, and two striking performances from Marcello Mast troianni and Monica Vitti. More in their line is Carty on, Henry (`a' Leicester Square Theatre) in which Talbot Rothwell adds Joan Sims (superb) and Barbara Windsor to the six wives of Henry VIII, and every., one goes around getting it, making it, having it, doing it and losing it, just like the present day.