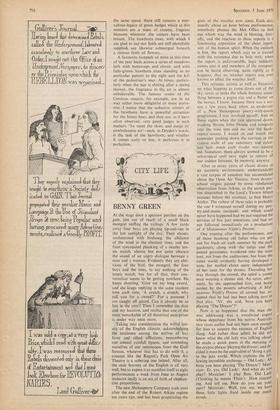 At the stage door a sparrow perches on the gate, just out of reach of a small black mongrel sniffing the railings. A few yards away four boys are playing tip-and-run in the last sunlight of the day. Their shouts, orchestrated with birdsong, the sibilance of the wind in the chestnut trees, and the faint syncopated plunking of a nearby ten- nis match, almost but not quite obscure the sound of an angry dialogue between a man and a woman. Evidently they are obli- vious of the bird, the mongrel, the four boys and the trees, to say nothing of the tennis match, but for all that, their con- versation seems to be getting nowhere. He keeps shouting, 'Give me my long sword,' and she keeps replying in the same insolent tone each time, 'A crutch, a crutch, why call you for a sword?' For a moment I am caught off guard. Can it already be so late in the year? Then I remember the date and my location, and realise that one of the most remarkable of all theatrical enterprises is under way once more.

Taking into consideration the wilful lun- acy of the English climate, acknowledging the incidence among the natives of hay fever and allied afflictions, remembering our annual rainfall figures, and reminding ourselves of our remoteness from the Gulf Stream, whatever that has to do with it, a concept like the Regent's Park Open Air Theatre is a sobering one indeed. After all, the stoic bravery of the English is all very well, but to expect it to manifest itself at eight performances a week from June to August inclusive really is an act of faith of elephan- tine proportions.

The new Shakespeare Company took over after the end of the Robert Atkins regime ten years ago, and has been propitiating the

gods of the weather ever since. Each day, usually about an hour before performance, somebody phones the Met Office to find out which way the wind is blowing, liter- ally, and the reaction to these reports is a fascinating exposition of the sheer ingen- uity of the human spirit. When the outlook is fine, the report which says so is treated with the reverence due to holy writ; when the report is unfavourable, logic suddenly comes into it and members of the company can be heard observing, quite rightly as it happens, that no weather report was ever known to affect the weather itself.

This reliance, artistic as well as financial. on what happens to come down out of the sky, tends to make the whole business some- thing between a pagan rite and a flutter on the horses. I know, because there was a sea- son a few years back when, as co-deviser of a New Shakespeare poetry-with-music programme, I was involved myself. And on those nights when the rain spattered down. washing Byrom, John Donne and company' into the wine tent and me into the bank- ruptcy courts, I would sit and watch the rainwater gushing down the crevices in the canvas walls of our sanctuary and calcu- late how much each rivulet was costing me. Somehow, there always seemed to be a sub-tropical spell next night to restore all our sodden fortunes. In memory, anyway.

After so many years of classic drama in an eccentric environment, understandablY a vast corpus of anecdote has accumulated about the Open Air Theatre, from drama- school virgins pained by some rabelaisian observation from Atkins, to the search par- ties dispatched to the Lord's Tavern fifteen minutes before the overture, to find Henry Ainley. The richest of these tales is probably the one I witnessed myself during my poe- try-and-music escapade, and which could never have happened had we not required the services of five jazz musicians, and had we not followed immediately on a production of A Midsummer Night's Dream.

One evening after the performance, one of those beaming old ladies who are put out for fresh air each summer by the park gardeners, along with the tulips and the potted geraniums, wandered into the wine tent, not from the auditorium, but from the outer world, evidently having developed a taste for mulled claret quite independent of her taste for the drama. Threading her way through the crowd, she spied a young man wearing a dinner suit. An actor, obvi- ously. So she approached him, and being misled by the posters advertising A Mid- summer Night's Dream all around her. as' sumed that he had just been taking part in that play. `Ah', she said, 'have you been playing "The Dream"?'

Now it so happened that the, man she was addressing was a woodwind expert whose departure from his native Australia two years earlier had not been soon enough for him to acquire the nuances of English slang. And rather than admit he did not know what the old lady was talking about. he made a quick guess at the meaning 01 the cryptic phrase 'playing the dream', and de; cided it must be the equivalent of 'doing a gig in the jazz world. Which explains the fol- lowing incredible exchange — Old Lady: Ah have you been playing 'The Dream'? Musi- cian: Er, yes. Old Lady: And what do you play? Musician: I play flute. Old Lady (Thinking he means 'Flute): How interest- ing. And tell me. How do you see your part? Musician: Well, you see, we have these little lights fixed inside our music stands . . .