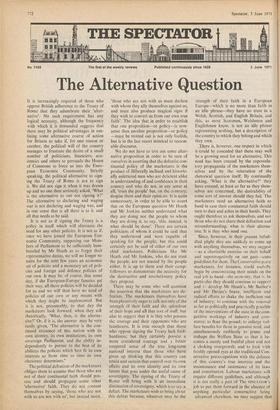 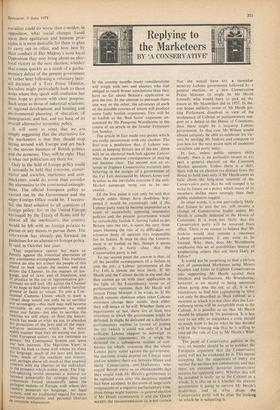 It is increasingly required of those who oppose British adherence to the Treaty of Rome that they adumbrate their 'alter- native'. No such requirement has any logical necessity, although the frequency with which it is demanded suggests that there may be political advantages in out- lining some alternative course of action for Britain to take if, for one reason or another, the political will of the country manages to frustrate the desire of a small number of politicians, financiers, aca- demics and others to persuade the House of Commons to force us into the Euro- pean Economic Community. Strictly speaking, the political alternative to sign- ing the Treaty of Rome is not to sign it. We did not sign it when it was drawn up and no one then seriously asked, 'What is the alternative to our not signing it?' The alternative to declaring and waging war is not declaring and waging war, and in one sense that is all there is to it, and all that needs to be said.

It is not as if signing the Treaty is a policy in itself which will eliminate. the need for any other policies. It is not as if, once we have joined the European Eco- nomic Community, supposing our Mem- bers of Parliament to be sufficiently bam- boozled by Mr Heath as to forget their representative duties, we will no longer re- quire for the next few years an economic set of policies and a monetary set of poli- cies and foreign and defence policies of our own. It may be, of course, that some day, if the European-Europe fanatics get their way, all these policies will be decided for us and we will then have no need of policies of our own or any means with which they might be implemented. But it is not, presumably, to that day the marketeers look forward. when they ask rhetorically, 'What, then, is the alterna- tive?' Or, if it is, the answer may be very easily given, 'The alternative is the con- tinued existence of this nation with its own identity, its own institutions, its own sovereign Parliament, and the ability in- dependently to pursue to the best of its abilities the policies which best fit its own interests as from time to time its own electorate determines.'

The political defeatism of the marketeers obliges them to assume that those who are not of their continental faith should pos- sess and should propagate -some other 'alternative' faith. They do not content themselves by saying, 'those who are not with us are not with us', but instead insist, 'those who are not with us must declare with whom they ally themselves against us, and must also produce magical signs if they wish to convert us from our own true faith'. The idea that in order to establish that one proposition—or policy—is non- sense then another proposition—or policy —must be trotted out is not only foolish, but is in the last resort inimical to reason- able discourse.

We do not have to .trot out some alter- native proposition in order to be sure of ourselves in asserting that the defeatist con- tinental policy of the marketeers is the product of illiberally inclined and historic- ally unlettered men who are deficient alike in understanding of and confidence in their country and who do not, in any sense at all, 'trust the people' but, on the contrary, despise them and their opinions. It is quite unnecessary, in order to be able to assert that on the European question Mr Heath and Mr Jenkins neither understand what they are doing nor the people to whom they are doing it, to say,. 'this. instead, is what should be done'.' There are certain politicians of whom it could be said that • they understood and were capable of speaking for the people; but this could certainly not be said of either of our two chief marketeers. Politicians like Mr Heath and Mr Jenkins, who do not trust the people, are not trusted by the people either. It is up to them and their camp- followers to demonstrate the necessity for the destructive and revolutionary policy they propose.

There may be some who will question the assertion that the marketeers are de- featists. The marketeers themselves have been plaintively eager to talk not only of the strength of their faith and the splendour of their hope and all that sort of stuff, but also to suggest that it is they who possess the courage and their opponents who are fainthearis. It is true enough that those who oppose signing the Treaty lack fool- hardiness; but they certainly possess a more considered courage and a better tempered sense of the true long-terni national interest than those who have given up thinking that this country can retain and sustain that control over its own affairs and its own identity and its own future that goes under the useful name of sovereignty. The signing of the Treaty of Rome will bring with it an 'immediate diminution of sovereignty. which is to say. a defeat. The marketeers wish to bring about this defeat because, whatever may be the strength of their faith in a European Europe—which is no more than faith in an idle phrase—they have no trust in a Welsh, Scottish, and English Britain, and this, as most Scotsmen, Welshmen and Englishmen know, is not an idle phrase representing nothing, but a description of the country to which they belong and which they own.

„There is, however, one respect in which it could be conceded that there may well be a growing need for an alternative. This need has been created by the expostula- tory propaganda of the marketeers them- selves and by the reiteration of the rhetorical question itself. By continually asking, 'What is the alternative?' they have created, at least so far as they them- selves arc concerned, the desirability of some sort of answer should they fail. The marketeers need an alternative faith to hand in case their continental faith should turn to dust and ashes in their hands. They ought therefore to ask themselves, and not those who do not share their defeatism and misunderstanding, what is their alterna- tive:It is they who need one.

Since, however, in their present befud- dled plight they arc unlikely to come up with anything themselves, we may suggest —as a charitable exercise on their behalf and supererogatively on our part—some guidelines for them. The Conservative party marketeers, for instance, could usefully begin by concentrating their minds on the real job to hand—the economy, that is. In particular they should continue to support and to develop Mr Heath's, Mr Barber's and Mr Davies's brave, intelligent and radical efforts to shake the inefficient out of industry; to continue with the removal as far as politically and practically possible of the interventions of the state in the com- petitive workings of industry and com- merce; to float the pound; to enlarge wel- fare benefits for those in ienuinc need, and simultaneously ruthlessly to prune and reshape the Welfare State so that it be- comes a sturdy and fruitful plant and not a choking overgrowth; and to look with freshly opened eyes at the traditional Con- servative preoccupations with the defence of this country's true interests and the maintenance and sustenance of its laws and constitution. Labour marketeers will require different guidelines, and although it is not really a part of The smicra-roll's job to put them forward in the absence of anything particular constructive being advanced elsewhere, we may suggest that socialists could do worse than c.-msider, in opposition, what social changes to ,.d upon their egalitarian and humane prin- ciples it is most desirable for them to plan to carry out in office, and how best by their conduct of Her Majesty's most loyal Opposition they may bring about an elec- toral victory at the next election, whether that comes quickly as a result of a parlia- mentary defeat of the present government or rather later following a voluntary tacti- cal decision of a Tory Prime Minister. Socialists might particularly look to those areas where they speak with confusion but must hope to govern with clear purpose. Such areas as those of industrial relations; or regional development and housing and environmental planning; of education; of immigration; and last, and not least, of its overall alternative economic policy.

It will seem to some that we are simply suggesting that the alternative for the marketeers is that they should stop laying around with Europe and get back to the serious business of British politics and the economy. They will be right. That is what our politicians are there for.

Only in the field of foreign policy could It seriously be held that everyone, conser- vative and socialist, marketeer and anti- marketeer, could do worse than consider the alternative to the continental entangle- ment. The otlicial European policy as carried out by the Government and the eager Foreign Office would be. f success- ful, the final solution to all questions cf foreign policy: for. in the United Europe envisaged by the Treaty of Rome and by almost all the inerketeers, this country would be left with no foreign policies to Pursue or any means io pursue them. The SPECTATOR has already put forward its guidelines for an alternative foreign policy. It said in October last year: That experience cannot but warn us fiercely against the historical aberration of any continental entanglement. That tradition cannot do else but exhort the people of this island to look across the oceans and not across the Channel. In the matters of lan- guage, and of laws. and of freedoms, and of practice in the use of representative goy. 9'oment we will look idly across the Channel if we hope to find there any reliably familiar ground or faces or voices. To join a Con- tinental Customs Union which is itself a closed shop would not only be to sacrifice our sovereignty—this itself may well become Inevitable in any arrangement we make about our future--but also to sacrifice the liberties we still enjoy, to flout the history which has made us what we are, to abandon the protection of the laws and of the repre- sentative institutions which, in far more stable manner than they do among our prin- cipal European suitors, we are fortunate to possess. No Continental System can serve our best interests. The Maritime View, in Which we look to those with whom we share the language, much of the laws'and institu- tions, much of the tradition and history. and, perhaps above all, much of that essential Concern with the liberties of the individual, is the prospect which makes sense. The Eng- sh-speaking world possesses a natural co- herence potentially far stronger than any coherences forced unnaturally upon the polyglot nations of Europe with whom this country possesses no language, no legal system, and no traditional regard for repre- sentative institutions and personal liberties in common whatsoever.