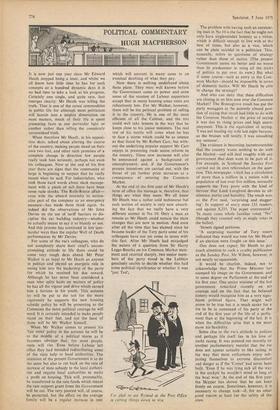 It is now just one year since Mr Edward Heath stopped being a loser, and whilst we all know how little time he has for such concepts as a hundred dynamic days it is no bad time to take a look at his progress. Certainly one single, and quite rare, fact emerges clearly: Mr Heath was telling the will launch into a mighty dissertation on most matters, much of their life is spent presenting facts in one particular light or another rather than telling the completely unvarnished truth.

When therefore Mr Heath, in his opposi- tion days, talked about altering the course of the country, making people stand on their own two feet, and other such promises of a complete change in direction few people

really took him seriously, perhaps not even his colleagues. Now at the end of his first year there are signs that the community at large is beginning to suspect that he really meant what he said. For industrialists, who took those hard words about slack manage- ment with a pinch of salt there have been some rude shocks. The Rolls-Royce affair— even with the absurd necessity to nation- alise part of the company as an emergency measure—has made them think again. As indeed did the observations of Mr John Davies on the use of tariff barriers to dis- cipline the car building industry—whether he actually meant to say it so bluntly or not. And this process has continued in less-spec- tacular ways than the regular Wall of Death performances by Mr Davies.

For some of the PM'S colleagues, who do not completely share their chief's uncom- promising attitude to life there could he some very tough days ahead. Mr Peter Walker is as loyal to Mr Heath as anyone in politics and played an energetic role in seeing him into the leadership of the party for which he received his due reward: Although he has never been considered a man who splits hairs on matters of policy he has all the vigour and drive which earned him a fortune in his youth. This autumn he will be put to the test for the more vigorously he supports the new housing subsidy policy he will be presenting to the Commons the more political courage he will need. It is certainly intended to make people stand on their feet, and not the least of those will be Mr Walker himself.

When Mr Walker comes to present his 'fair rents' policy in the autumn he will be in the middle of a political storm as it becomes obvious that, for most people, rents will rise. Even before Labour left office they had intended redistributing some of the state help to local authorities. The intention of the present Government is to do the same but also to cut back on the rate of increase of state subsidy to the local authori- ties and require local authorities to make a profit on housing. This will, presumably, he transferred to the rate funds which means the rate support grant from the Government will be cut. The very poorest will, of course, he protected, but the effect on the average family will be a regular increase in rent which will amount in many cases to an eventual doubling of what they pay.

Now there is nothing underhand about these plans. They were well known before the Government came to power and even some of the stoutest of Labour supporters accept that in many housing areas rents are ridiculously low. For Mr Walker, however, there will be the political problem of selling it to the country. He is one of the most

efficient of all the Cabinet, and the DTI

could well take lessons in the way that he keeps close to his junior ministers. The real test of his mettle will come when he has to face a storm which could be as intense as that faced by Mr Robert Carr, but with- out the underlying popular support Mr Carr enjoys in presenting trade union reform to the country. These new increases will also be announced against a background of unemployment, and, if the Government's present intentions are carried out, with the threat of yet further price increases as a consequence of entering the Common Market.

At the end of the first year of Mr Heath's term of office the message is, therefore, that things are what they seem. We all knew Mr Heath was a rather cold technocrat but each section of society is only now absorb- • ing the fact that we really have a very different animal in No 10. Only a man as remote as Mr Heath could sustain the stern changes that are now in motion. And even after all the time that has elapsed since he became leader of the Tory party some of his colleagues have not yet come to terms with this fact. After Mr Heath had misjudged the nature of a question from Sir Harry Legge-Bourke on his Common Market state- ment and retorted sharply, two senior mem- bers of the party stood in the Lobbies genuinely unable to decide whether this had some political significance or whether it was 'just Ted' I'm glad to see Ryland at the Post Office is cutting things down to size The problem with having such an unrelent- ing man in No 10 is the fact that he might not only have singleminded honesty as a virtue, which is difficult enough to live with at the best of times, but also as a vice, which can be plain suicidal in a politician. This, naturally, refers to questions of strategy rather than those of tactics. (The present Government seems no better and no worse than its predecessor in using all the tricks of politics to put over its view.) But what if some course—such as entry to the Com- mon Market—should be impossible in terms of domestic tactics. Will Mr Heath be able to change the strategy?

And who can deny that these difficulties are closing in on him now over the Common Market? The Bromsgrove result has put the party managers in the patently absurd posi- tion of saying that result had little to do with the Common Market at the price of saying it was due to rising prices and high unem- ployment. This is the equivalent of saying, 'I was not beating my wife last night because, as the bruises will testify, I was assaulting my mistress'.

The evidence is becoming incontrovertible that the country wants nothing to do with the Market—and will deal roughly with any government that does want to be part of it. For example, in Scotland the Sunday Post carried out its own referendum on the ques- tion. This newspaper, v,hich has a circulation of more than a million in a nation with a population of just over five million, normally supports the Tory party with the kind of fervour that Lord Longford devotes to ab- stinence, purity and humility. The result was, as the Post said, 'surprising and stagger- ing'. In support of entry were 133 readers, and against 8,235. The paper commented : 'In many cases whole families voted "No" (though they counted only as single votes in the ballot).

'A surprising number of Tory voters indicated they would not vote for Mr Heath if an election were fought on this issue.'

One does not expect Mr Heath to pay much attention to such a couthy publication as the Sunday Post. Mr Wilson, however, is not nearly so squeamish.

It would be churlish, indeed, not to acknowledge that the Prime Minister has stamped his image an the Government, and to some degree on Parliament at the end of his first year. One senior minister of the last government remarked recently on n is courage and on the fact that he believed history would recognise him as a very signi- ficant political figure. That might well prove to be true but it is much easier for a PM to be in command of his party at the

end of the first year of the life of a parlia- ment than at the beginning of the last. It is when the difficulties arise that a PM must show his flexibility.

Some clue to the inves attitude to politics and perhaps life itself lies in his love of yacht racing. It was pointed out recently by another parliamentary matelot that the Pm does not appear actually to like sailing in the way that most enthusiasts enjoy sub-

jecting themselves to extreme discomfort and danger as if the 'Comet' had never been built. 'Even if he was lying sick all the way in the cockpit he wouldn't mind so long as the boat won.' At the end of the first year the Skipper has shown that he can keep firmly on course. Sometimes, however, it is necessary to change tack--if, for no other good reason at least for the safety of the crew.