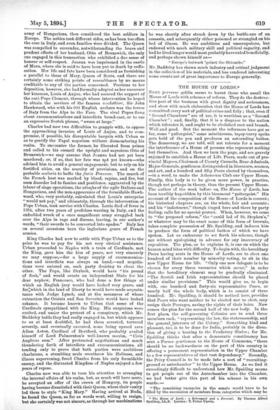 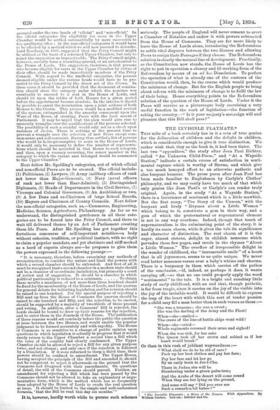 THE HOUSE OF LORDS.*

SOME perverse goblin seems to haunt those who assail the House of Lords with schemes of reform. They do the destruc- tive part of the business with great dignity and seriousness, and show with much elaboration that the House of Lords has committed every sort of political crime and folly ; that, even if "Second Chambers" are of use, it is worthless as a "Second Chamber " ; and, finally, that it is a disgrace to the nation which tolerates it, and ought to be abolished root and branch. Well and good. But the moment the reformers have got so far, some " poltergeist," some mischievous, topsy-turvy sprite gets hold of the pen and produces an astounding bathos. The democracy, we are told, will not tolerate for a moment the interference of a House of persons who represent nothing but themselves. And then we turn the page, and are gravely enjoined to establish a House of Life Peers, made out of pro- vincial Mayors, Chairmen of County Councils, Rear-Admirals, Major-Generals, gentlemen distinguished in literature, science, and art, and a hundred and fifty Peers elected by themselves, —in a word, to make the Athenaeum Club our Upper House. Finally, this body is to be given more power, in practice, though not perhaps in theory, than the present Upper House. The author of the work before us, The House of Lords, has been terribly hag-ridden by this bicameral "poltergeist" His account of the composition of the House of Lords is correct ; his historical chapters are, on the whole, fair and accurate ; and his "indictment," though tinged here and there by party feeling, calls for no special protest. When, however, we come to "the proposed reform," the " cauld lad of St. Stephen's," or whatever may be the exact name of this form of brownie, takes complete possession of Mr. Spalding, and induces him to produce the form of political bathos of which we have spoken. Let us endeavour to set forth his scheme, though not without apologising in advance for any inaccuracy of exposition. The plan, as he explains it, is one on which the human mind bites with difficulty. To begin with, the hereditary Peers having seats in the House of Lords, are to elect one hundred of their number by minority voting, to sit in the new Upper House for life. " Only one new delegate is to be chosen for every three vacancies which occur," in order that the hereditary element may be gradually eliminated. "The Scotch and Irish representations should be placed under similar provisions." This would give us, to begin with, one hundred and forty-six representative Peers, or nearly half the whole body, which is to consist of three hundred. Mr. Spalding, it should be noticed here, provides that Peers who want neither to be elected nor to elect, may resign their Peerages, saving the rights of their heirs. Now comes the plan for the second half of the new body. In the first place, the self-governing Colonies are to send three members each, " representing the law, the statesmanship, and the general interests of the Colony." Something kind and pleasant, too, is to be done for India, probably in the direc- tion of giving a hearing to the Feudatory States ; for Mr. Spalding thinks that after a democratic constituency has sent a Parsee gentleman to the House of Commons, "there should be no backwardness on the part of this country in offering a permanent representation in the Upper Chamber to a few representatives of that vast dependency." Secondly, the Privy Council is to be made into a sort of "recruiting- ground or antechamber" to the Upper House. As we find it exceedingly difficult to understand how Mr. Spalding means to get people out of the Antechamber into the Chamber, we had better give this part of his scheme in his own words:— "The remaining vacancies in the senate would have to be filled by the succession of members from categories which may be

• The House of Lords a Retrospect and a Forecast. By Thomas Alfred Spalding, LL.B. London : T. Fisher lJnyrin.

grouped under the two heads of 'official' and `non-official.' In the official categories the eligibility for seats in the Upper Chamber would be settled automatically by mere succession to the qualifying office ; in the non-official categories it would have to be effected by a method which we will now proceed to describe. Lord Rosebery, in 1888, suggested that the Privy Council might be utilised as the basis of a reformed Upper Chamber, but only to reject the suggestion as impracticable. The Privy Council might, howevei, usefully form a recruiting-ground, or an antechamber to the House of Lords. The suggestion, therefore, is that persons who became eligible for seats in the Upper Chamber by virtue of their office, should be made immediately members of the Privy Council. With regard to the unofficial categories, the persons deemed eligible under the various heads would have to be pro- moted to the Privy Council by the direct act of the Crown. In these cases it should be provided that the document of nomina- tion should state the category under which the nominee was eventually to succeed to a seat in the House of Lords, and should lie upon the tables of both Houses for a given period before the appointment became absolute. In the interim it should be possible to annul the nomination upon a joint address of both Houses to the Crown. This process would be a modified revival of the system, extinguished in the anarchy consequent upon the Wars of the Roses, of creating Peers with the tacit assent of Parliament. It may be urged that the plan would give rise to unseemly wrangles over the qualifications of the persons selected. The possibility of such a scandal would only act as a check upon rashness of choice. There is nothing at the present time to prevent a wrangle over the selection of new Peers except com- mon-sense and self-restraint. Having thus settled a list of persons who would be heirs-presumptive to seats in the Hcuse of Lords, it would only be necessary to define the number of representa- tions which should be accorded in that House to each category, and then, upon a vacancy occurring, the senior member in the category to which the vacant seat belonged would be summoned to the Upper Chamber."

Next follow Mr. Spalding's categories, out of which official and non-official Peers are to be created. The official include. (1) Politicians, (2) Lawyers, (3) Army (military officers of rank not lower than Major-General), (4) Navy (naval officers of rank not lower than Rear-Admiral), (5) Distinguished Diplomats, (6) Heads of Departments in the Civil Service, (7) Viceroys and Colonial Governors, (8) An Archbishop or two, (9) A few Dons and ex-Chairmen of large School Boards, (10) Mayors and Chairmen of County Councils. Next follow the non-official categories, such as,—Commeree, Engineering, Medicine, Science, Agriculture, Philanthropy. As far as we understand, the distinguished gentlemen in all these cate- gories are to be forced into the Privy Council, and there to wait till delivered thence by an Act of Parliament creating them life Peers. After Mr. Spalding has got together this fortuitous concourse of self-important notables—a body without cohesion, tradition, or political instinct, with no right to claim a popular mandate, and yet obstinate and stiff-necked as a herd of experts always are—he proposes to give them the powers expressed in the following passage :-

" It is necessary, therefore, before examining any methods of reconstruction, to consider the nature and limit the powers with which a second chamber should be entrusted. And first of all it must be recognised that a second chamber in a modern state should not be a chamber of co-ordinate jurisdiction, but primarily a court of review and of suggestion. It should be a chamber in which political partisanship is reduced to a minimum To obtain these results a maximum of not more than three hundred should be fixed for the membership of the House of Lords, and the quorum for general debate for initiating legislation and for revision should be raised to one hundred. For the special purpose of rejecting a Bill sent up from the House of Commons the quorum should be raised to one hundred and fifty, and the rejection, to be carried, should be supported by a majority of two-thirds of those present and voting. In addition, after a Commons' Bill is rejected, the Lords should be bound to draw up tlieir reasons for the rejection, and to enter them in the Journals of the House. Thelpublication of these reasons would set concisely before the public the question at issue between the two Houses, and would enable the popular judgment to be formed accurately and with rapidity. The House of Commons is so sensitive to a change of public opinion upon questions in which legislation is actually in progress that it would rarely return to the Upper Chamber a second time a Bill which the voice of the country had clearly condemned. The Upper Chamber should be allowed to reject a Bill for any given purpose twice, and not oftener; and only once if the rejection is followed by a Dissolution. If it were returned to them a third time, their powers should be confined to amendment. The Upper House, having accepted the principle of the Bill and amended it, should not be competent to reject it afterwards on the ground that the Commons had disagreed with their amendments. On questions of detail, the will of the Commons should prevail. Further, an amendment for rejecting a Bill which has been passed by the Commons should not be allowed to take an explanatory or argu- mentative form, which is the method which has so frequently been adopted by the House of Lords to evade the real question at issue. It should be limited to the simple and well-understood formula, 'that the Bill be read this day six months:" It is, however, hardly worth while to pursue such schemes seriously. The people of England will never consent to erect a Chamber of Notables and endow it with powers subtracted from the House of Commons. They are far more likely to

the House of Lords alone, introducing the Referendum to settle vital disputes between the two Houses and allowing Peers to resign their Peerages if they choose. The Referendum solution is clearly the natural line of development. Practically, as the Constitution now stands, the House of Lords has the right to put in operation a clumsy and ill-working form of the Referendum by means of an ad hoc Dissolution. To perfect the operation of what is already one of the customs of the Constitution would, then, be the course which would produce the minimum of change. But for the English people to bring about reform with the minimum of change is to fulfil the law of their being. Hence everything points to the Referendum solution of the question of the House of Lords. Under it the Peers will survive as a picturesque body exercising a very useful function in the work of legislation—the function of asking the country,—" Is it your majesty's sovereign will and pleasure that this Bill shall pass ?"